Tactics mean using planned actions to achieve success. In football terms, it means developing strategies in the game and bringing actions onto the pitch. As an individual player and also as a team, I try to be one step ahead of my opponent. Simply broken down, I want to win/have the ball and get past the opponent with the ball.

My opponent always plays a role in these considerations, i.e. it is not only my way of setting the ball, my ideas that decide the progress or the best solution, but in principle my opponent decides. What spaces does he offer me, what weak points can I recognise, how does he try to shape his own game.

I have to find a solution to these behaviours, to his idea of controlling my game or me as an opponent.

For many years, the predominant defensive strategy was a ball-oriented space defence. In other words, narrowing the spaces, ball-oriented shifting, directing, creating superior numbers, situational doubling. There are many principles or possibilities to defend against this way. For example, I can try to create space by shifting the play or play against the direction of the shift; create an outnumbering situation on one side of the field and play it dynamically or shift the play again when the opponent shifts extremely. Important in this context are always a good division of space, good positioning (positioning between opponents, „swimming“, moving in the gaps, offering in the back of the opponent, creating connections among each other, creating diagonal play-off stations…).

In my work as a selection coach and in coach training, I am currently experiencing that these „basics“ are now basically well internalised by many players and coaches and are the focus of many forms of training (rondos / position-oriented (outnumbered) forms of play).

However, what we are now seeing in top-level football and to some extent also again in youth and amateur football is a trend towards more man-orientation in the defence. Not only in the penalty area, but sometimes all over the pitch. Bielsa with Leeds is only one prominent example, many teams are now pressing in a very man-oriented way. Finding solutions against these man-orientations (as a team and also individually or in cooperation with a teammate) is content that we should not neglect.

In player training, the goal must be to cover all facets of the game and to package them in training forms in such a way that solutions are conveyed against different strategies of defending. My current impression is that too little time is invested in training and competition.

When it comes to finding solutions against man-oriented defending, I think it is worthwhile to look beyond one’s own nose.

In handball, training is based on the principle of „learning to play in man-to-man defence“. One uses a holistic approach to improve specifically in defence and offence and to create playful solutions. In the E-Juniors competition, 3 vs. 3 is played in two zones in man-to-man defence. The rules state that all players must defend man-to-man. This is controlled by the referee. This form was developed because many teams were already playing space defence around the circle, which meant that there was no flow to the game. No flow, no action, no learning of the individual players.

In both halves 3 vs. 3, after a goal is scored a pair rotates from the back to the front half and vice versa.

In handball, therefore, the principle applies in training: first master man-to-man defence (and get to know/practice solutions against man-to-man defence), and later room-oriented defence is added. Positive (side) effect: solutions against this defensive strategy (playing without the ball, free running, 1 vs. 1, play and go,…) are trained and practised at a young age. From the point of view that players should first master the 1 vs. 1 from a defensive point of view (namely the 1 vs. 1 against the ball handler, and the 1 vs. 1 against the players waiting for the ball), the guiding principle arises: Learn to PLAY in man-to-man defence. The focus is therefore completely on individual tactical points. However, not in isolation, but holistically in the game.

It is also worth taking a look at futsal. Here, man-oriented defending is a strategy that is often used. This defensive strategy in turn gave rise to interesting solutions that can also be useful for 11 vs. 11 football. Among other things, there is the so-called 4-0 formation. In this formation, the goal-scoring area is deliberately not occupied. In some cases, the opponents are lured into their own half when they are in possession of the ball, in order to then use the space that is created by making deep runs and to become goal-threatening.A coordinated free running behaviour (opposite movements / rotations / running in front / blocking) of the 4 players and an individual pressing resistance in possession of the ball is indispensable.

In my opinion, forms in which a man-orientation is present or emerging offer a good opportunity to expand the repertoire/quality of players and prepare them for any requirements in modern football.

The following skills are particularly trained:

In defence: Due to the direct allocation, two main defensive tasks come to the players: 1 vs. 1 against the player with the ball and 1gg1 against a player without the ball. The 1 vs. 1 without the ball is very important because the defender is more often (almost permanently) challenged in this task. In 1gg1 without the ball, the defensive players have the task of preventing an attacker from gaining a positional/spatial advantage. (Keeping the inner line / seeing/feeling the opponent / still protecting teammates).

For the attackers it is important to create an advantage by: Free running/movements without the ball: individually (running feints) / coordinated with a teammate (opposite/rotation) / pulling space free for teammates (binding without the ball). Also, in possession, secure the ball or keep it moving and identify passing options (plus play out: play/go; double pass) or create superiority through an overcoming 1 vs. 1 and then play it out.

Here are some training forms that fit the theme. Zones and rules are a good way to illustrate the main points. The offside rule can also be used very well for this topic. On the one hand, you can „play“ more with the space in forms without offside, and on the other hand, offside always creates the compulsion to improve the timing of deep runs. 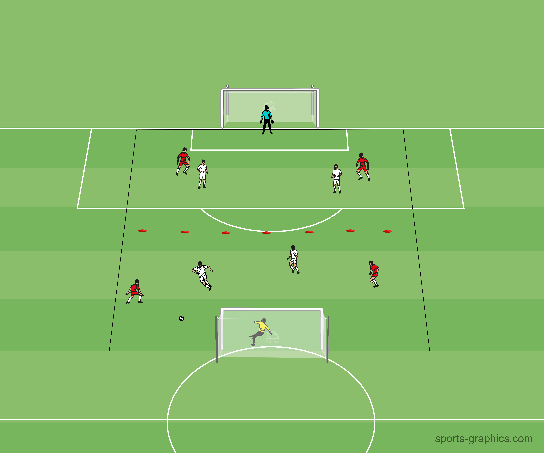 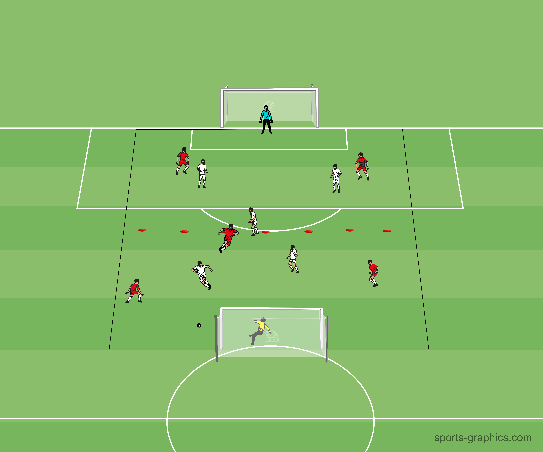 Play in two zones, each with equal numbers, without offside.

Possible variations:
– A pair is allowed to move up to the next zone.
– Futsal TH rule, only one back pass per possession. 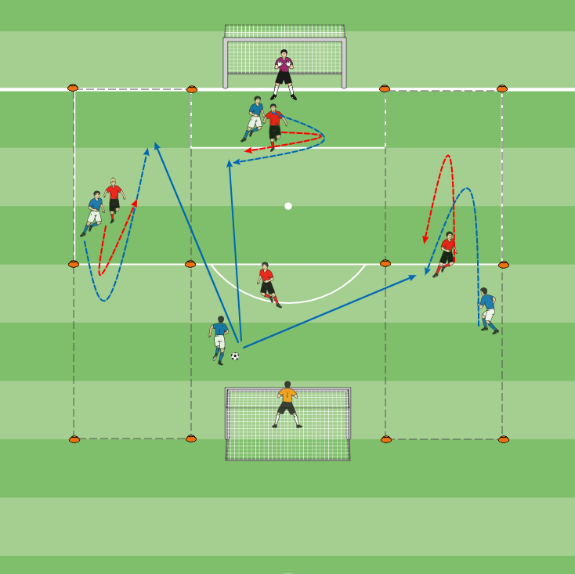 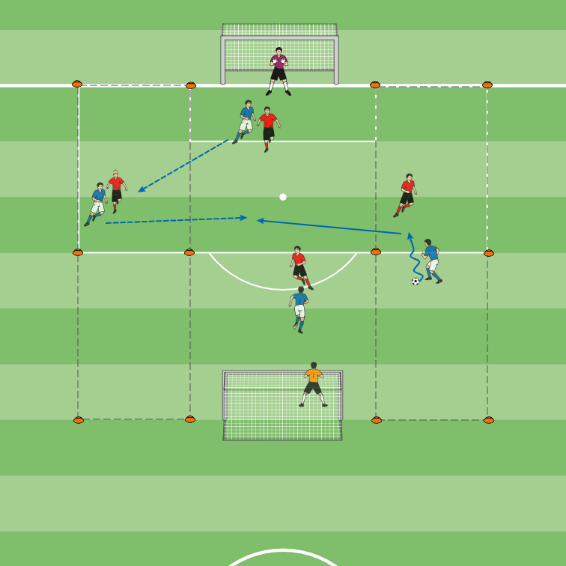 Four zones are played in 1 vs. 1. Playing with each other is allowed, zones may not be left. High focus on individual free running and 1 vs. 1 situations.

Possible variations:
– Futsal TH rules, only one back pass per possession phase
– See picture on the bottom: Zones may be hanged dynamically (SP rotations / free running against each other)
– for the defenders I can leave the decision free whether they have to go man-oriented or stay in their zone or also specify this. 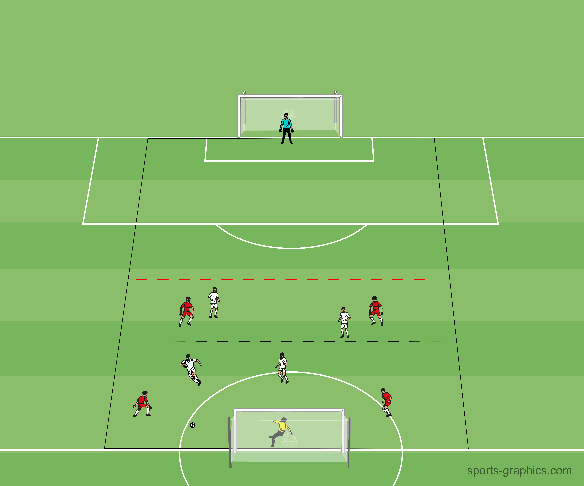 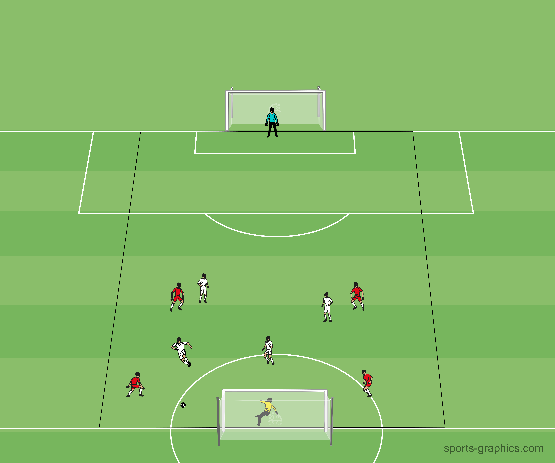 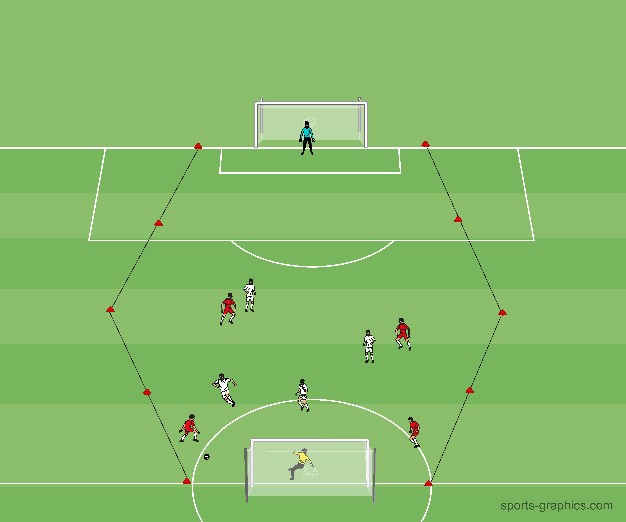 Form 1 – in zones (offside from red line) 🡪 Extension of the first form of play towards more proximity to the game
Form 2 – without zones (offside everywhere) 🡪 Offside everywhere simplifies high pressing and ensures permanent deep runs or cross deep runs/arch runs
Shape 3 – like 2, but in hexagon shape 🡪 Of course, adjustments to the field shape are also still possible