Door 4: Creating your own pressing opportunities

The practice I’ll talk through in this article is based on ideas from my own philosophy around pressing, and so I’ll start off with a question.

The team you coach is pressing high up the pitch, with the opposition centre backs in possession of the ball. The opposition play a long ball straight up to their target man, who controls and eventually loses the ball inside the your team’s half.

As a coach how do you assess that situation? Is it successful pressing? Is it average or even poor pressing? Are you happy as a coach in this situation? The answer probably depends on a few factors such as qualities of opposition, time in the game and result at the time, but if we view the situation generally, the answer largely depends on your philosophy. From my point of view, I’d view this situation as OK and be content enough with the outcome, but there is certainly a bit of disappointment amongst that. The disappointment comes from the fact that a pressing opportunity has been lost. The ball has been recovered, but it has not been recovered in a way which allows for a meaningful attack to develop immediately, and so the opposition get an easy ‘get out of pressure free’ card and can get set in their defensive structure again.

The practice can be seen below, with two teams used, one possession team (blue and red), and one pressing team (yellow). The practice is overall a 9v7 in favor of the possession team and includes two lines of both team’s structures as well as two players in the end zone. The practice can be adapted to suit any build-up systems, but for this, we are going with a 4-3-3 build-up against a 4-diamond-2 press. The coach works with the pressing team mainly. 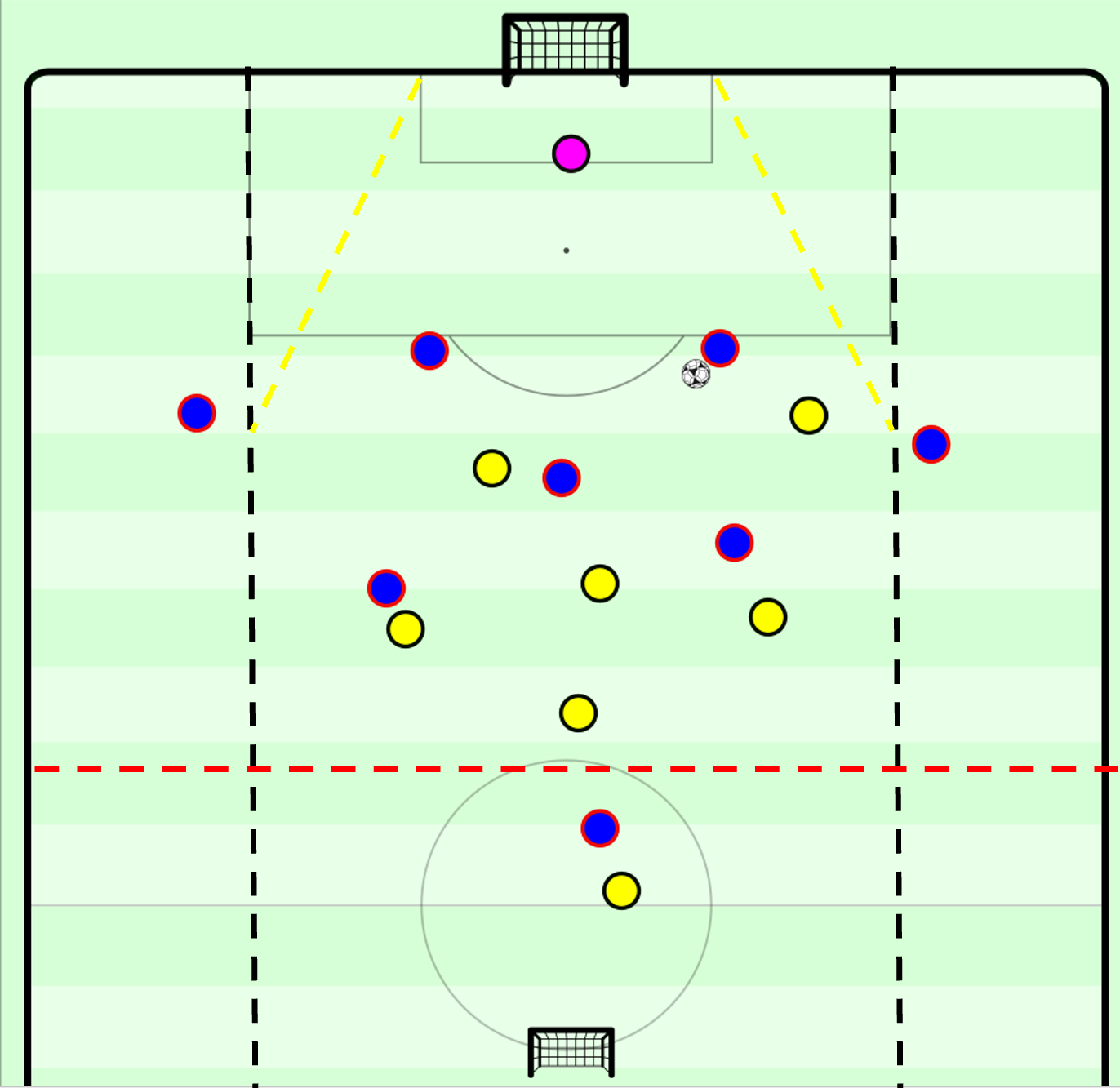 The yellow dotted diagonal line is used by the pressing team only if they win back the ball, and encourages diagonal runs towards goal when countering.

The constraints placed on the possession team mean they want to try and play wide, as they are given more points for doing so and are allowed to receive without being marked initially. The constraints placed on the pressing team mean they want to win the ball back centrally, and therefore both teams styles work against each other. Therefore, the pressing team should hopefully look to cut the wide angles, and force central play, as again they get more points for doing so.

The important constraint is the end zone. The possession team can use it whenever they want at no risk, as if they go long they cannot lose possession, due to the rule I mentioned. As a result, if you press too early and badly, the possession team can just go long and remove all risk. The possession team likely won’t get many points from this, and so it shouldn’t/won’t be their main focus, but it gives them something as a ‘get out of pressure’ card. The pressing team get points for winning the ball back and scoring, and so to score, they need to keep the ball from going long into this zone, and to not concede, they need a stable structure around the long pass. If the ball goes long, the pressing team cannot score a point and can only concede points or concede 0. Therefore we constrain the pressing team to want the ball to be played short.

Here is a theoretical example of a potential situation. The possession team has managed to work the ball wide, and an eight comes across to press. The pressing ten steps across to mark the central midfielder, and all nearby passing option are cut. As a result, the opposition are likely to try and play long.  If they do, the pressing team can’t get any points from this passage of play. 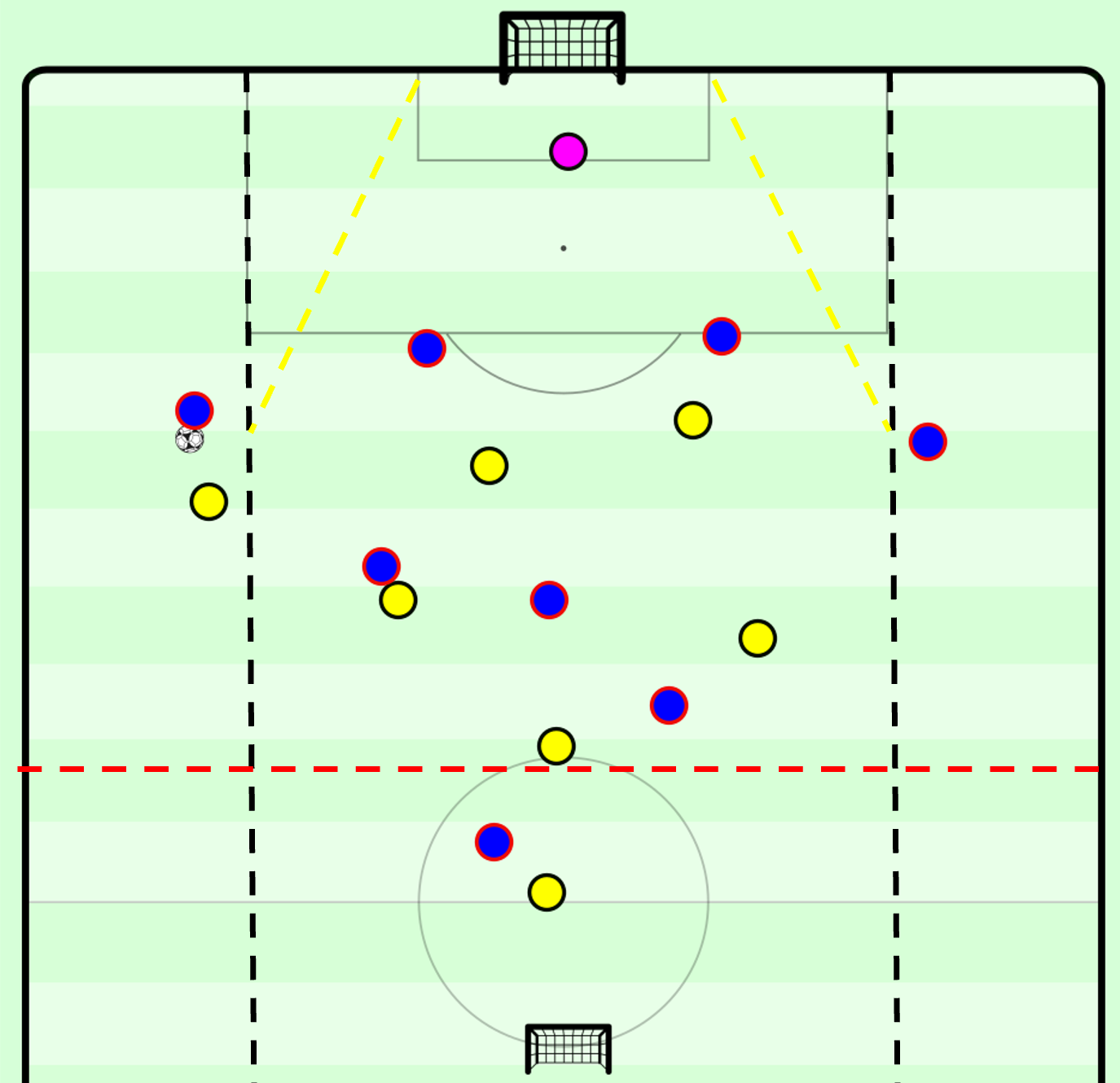 Below shows the same situation, but with different pressing intentions, now nearby passing options are not tightly marked, and instead, a central player is left open but within pressing distance. If the opposition fall into this trap and play into here, the team can try and collapse on this player and win the ball, which will get them lots of points due to the scoring system. 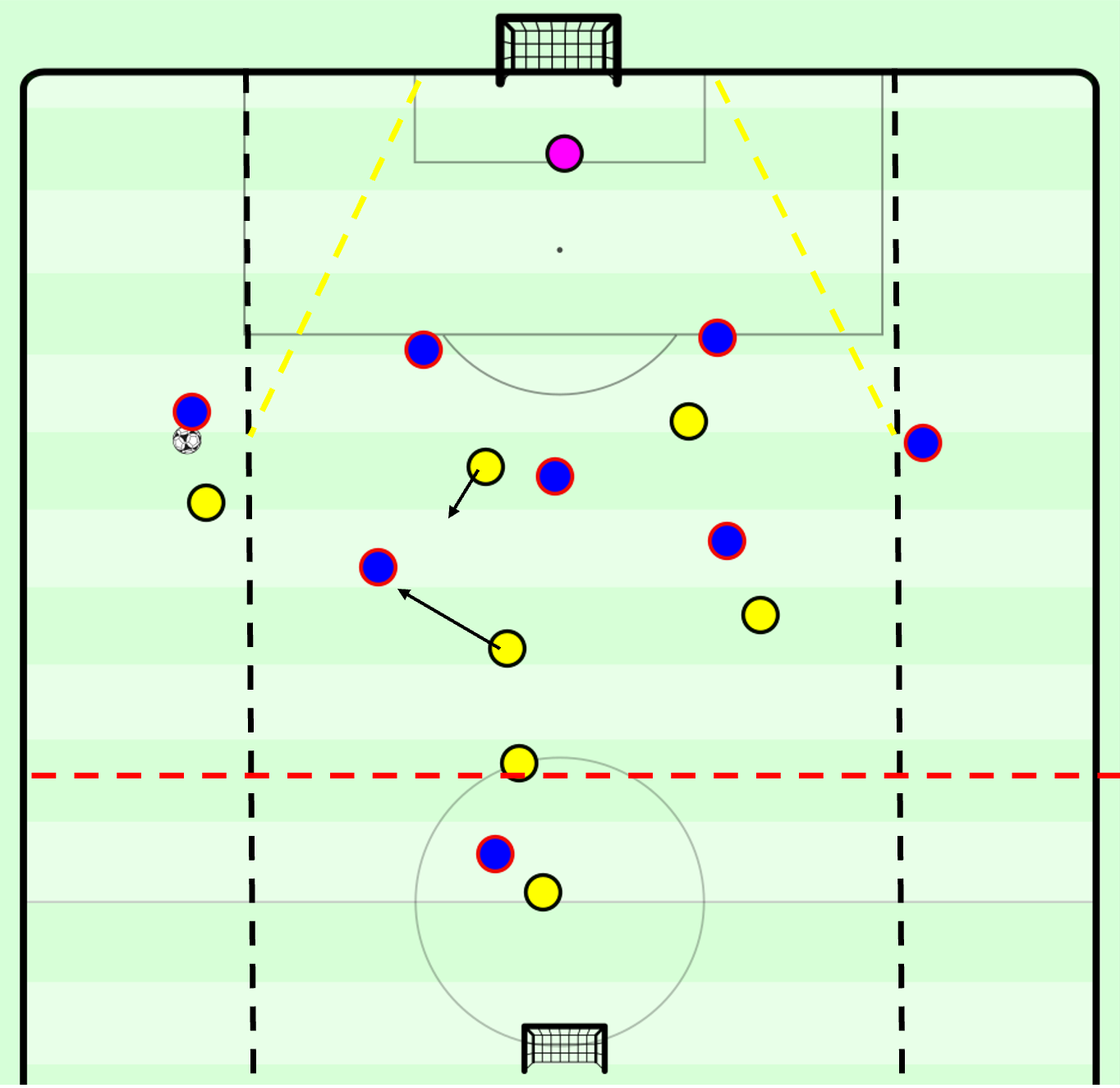 The pressing team have to press in a structure that allows them to deal with the long ball, and so they cannot just press full throttle all the time, otherwise the opposition will be more successful in the use of long balls. Therefore, there is an element of patience and allowing the opposition to receive before pouncing. I’ll run you through another example of good play from the pressing team.

The ball again is in the wide area, and an eight presses. Due to the threat of a long ball, the six and ball far eight drop in a little bit to keep a stable structure. The ball-near striker back presses and marks the pivot, leaving a passing lane to the centre back wide open. Once this pass is played, the ball far striker comes across and makes an arced run to cut off one side of the pitch. 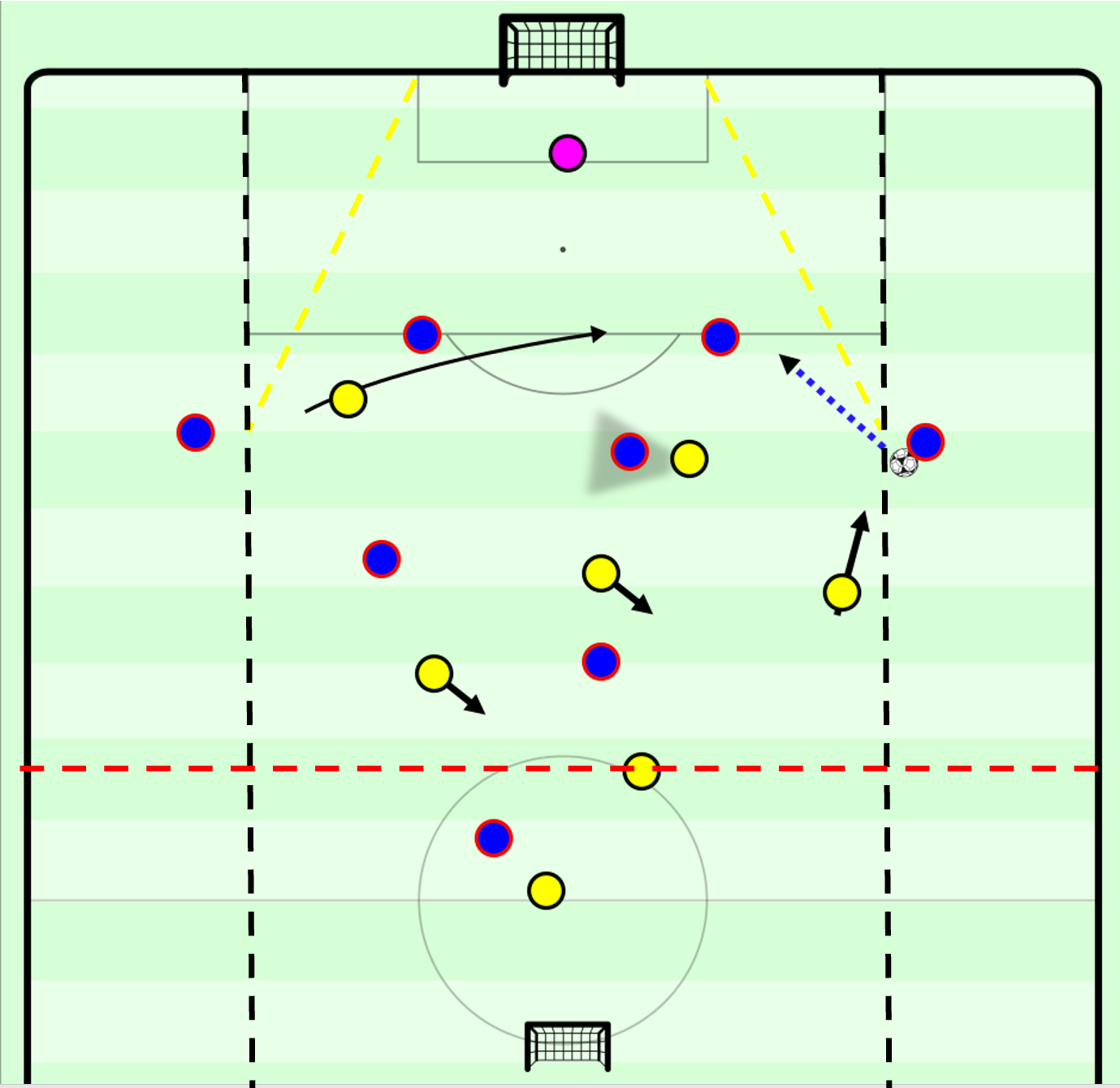 The striker now leaves the pivot and applies pressure in front of the centre back, while the far striker continues his movement. The central most midfielder (ten) sits off the pivot slightly in order to trap them once they receive the ball. The ball far eight also begins to push higher to press across if needed. The six even pushes higher, and so once the trap is set and it goes, they have to win the ball. 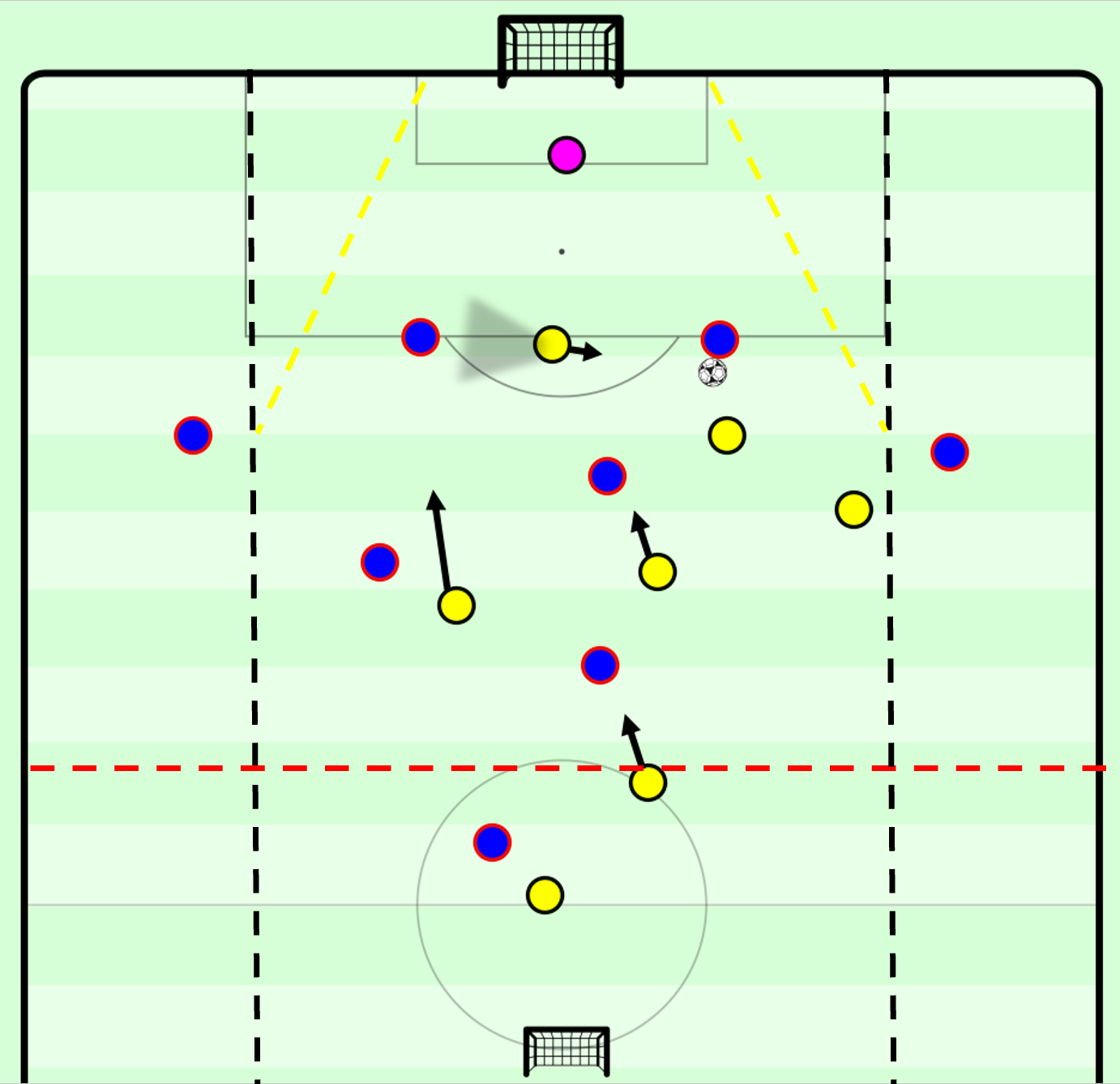 The pressing ten presses in and steals the ball from the pivot, and the rest offense of the pressing team is good, with at least three players likely to be able to get beyond the D. This play would give them 6 points, and all of it is facilitated not from the coach necessarily organising this trap, but from the environmental constraints manipulating the behaviour of the pressers. 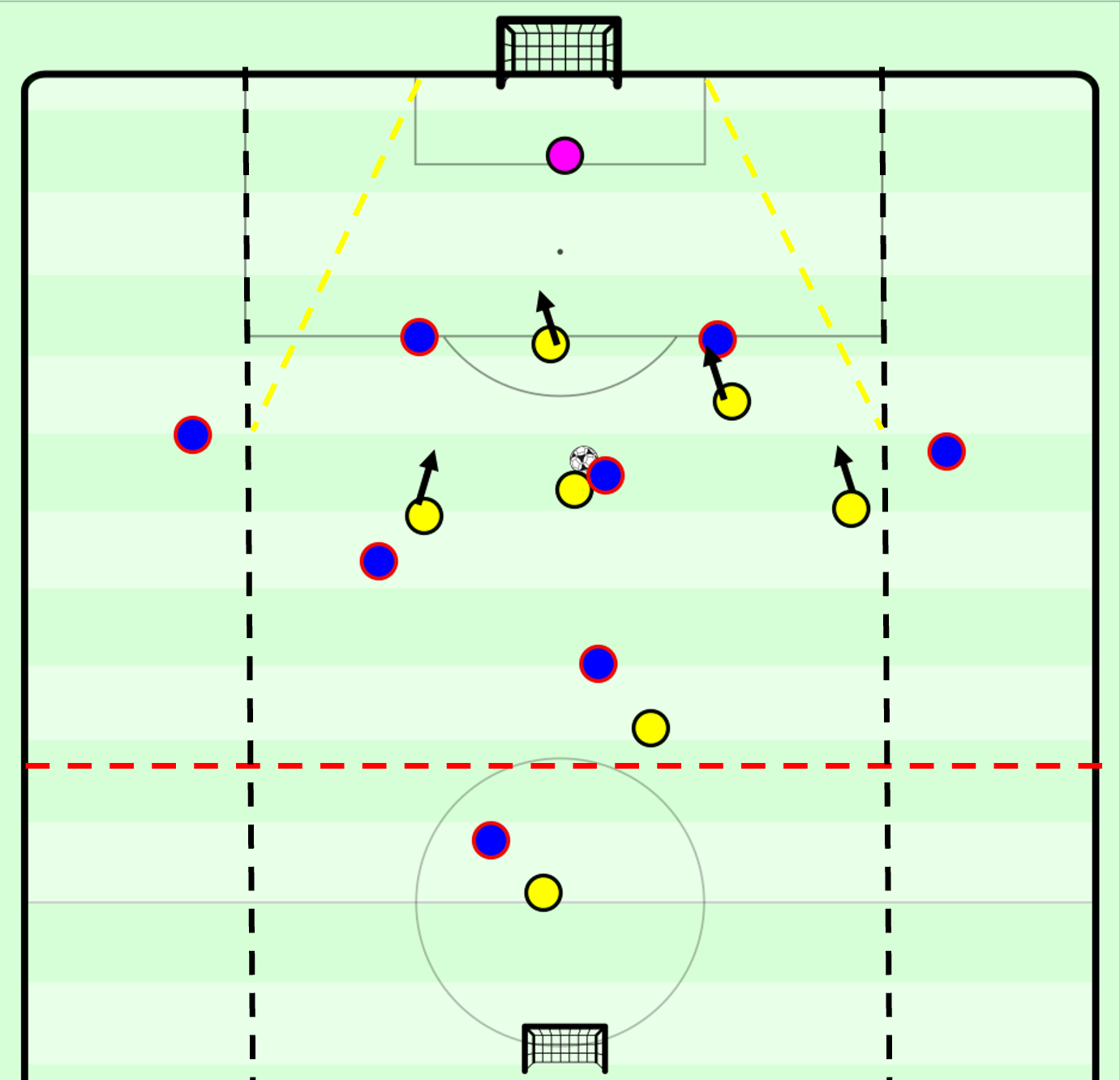 This session is adaptable to different pressing formations and aims, as the constraints around winning the ball in the centre could easily be switched to wide if this is your aim. More autocratic coaching could be used with the coach pointing out aspects of the play and showing positioning, but I personally use a more guided discovery led approach, and so I’d like use lots of questions during interventions. The use of Bloom’s taxonomy would help to construct these questions around coaching points, and so rather than simplistic remember questions like “where should you be”, we can access higher levels such as evaluation and analysis, for example “What would be the advantage of you dropping off? Why might it be better to win the ball centrally?”. The highest level of Bloom’s taxonomy is create, and so if the players identify, process and perceive affordances in the environment as you want them to, and execute a pressing trap like the one seen below, then I would say you have been successful as a coach. 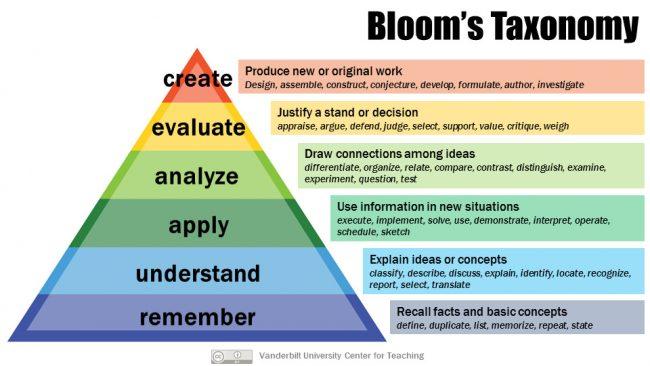 My ideas behind this largely came from watching sides in lower leagues try to press the ball, and the frustrations which sometimes emerge when the opposition just go long. Gerhard Struber’s pressing at Barnsley, which I wrote about for Spielverlagerung, incorporates these ideas around creating opportunities to press, and treating pressing situations as offensive opportunities. Most top pressing teams also incorporate pressing traps, and Peter Krawietz talked in an interview about how Liverpool structure pressing situations to benefit them offensively, something this practice works on.

This strategy isn’t something that I would use all game against all opposition, but it is certainly a key part of play at different levels, and I personally think this style of pressing in lower league football would yield large success. Even if this isn’t your overriding philosophy, the practice offers lots of coaching points and pressing skills to work on, with the use of cover shadow, blind side pressing, and compactness just some of the areas covered.