Door 15: Relation between over- and underload

In recent years, I’ve had the honor to work as a lecturer at several trainer-courses.

They often dealt with the advantages and disadvantages of positional play. The different superiorities were discussed and the feedback of the trainers was collected. Almost all trainers could identify with one principle:

Numerical superiority plays an important role for many trainers. Most of the coaches I’ve spoken to use these “number-games” as a foundation of their match-plans and try to establish numerical superiority against their opponents in both attack and defense.

The coaching team of an Austrian Bundesliga team even explained to me in detail how they planned to establish a 3 vs. 2 superiority on the wing – somewhere near the corner flag. This was successful, but “despite” the numerical overload, they were not able to achieve any breakthroughs.

The concept of numerical superiority as an offensive strategy is simply overestimated in today’s football. It is not uncommon to see team B defend team A easily despite being – in theory – outnumbered in the center. Nevertheless, before and after the game, the importance of the over- and underload are discussed again and again. The best example for this is, when a 4-4-2 with a double-pivot meets a 4-2-3-1 or 4-1-4-1. Numerical superiority alone does not guarantee a successful attack. The proof for this are the classic Small-Sided-Games like the 5 vs 3, or even more impressive the im 7 vs 5, in which there is no explicit input from outside, the game can quickly develop towards the scenario in which the three defenders take control and the attackers quickly end up in a dead end. This happens when the defenders can gain positional dominance by cleverly choosing their distances between each other and using cover shadows wisely. Based on this, I will make the following first thesis for the offensive game:

However, the game does not only consist of the offensive phase. The reason why the concept of numerical superiority is still so popular is that it can be crucial in another phase of the game. Once the ball is lost, it is crucial how many players you have for the defensive phase. If you attack with 5 vs 3 or 7 vs 5, then it often happens that you have no advantage in the attack through the pure overload, but when you lose the ball you are better prepared for the defensive phase. Especially teams that specialize in “Gegenpressing” are heavily dependent on the numerical superiority against the ball. It is not uncommon for these teams to speak of “Überzahl in Ballnähe” during their pressing. And since the game-phases merge into each other, a numerical superiority when having the ball is decisive when losing the ball. Based on this, I will present my second thesis:

At this point, however, I don`t want to give the impression that numerical superiority does not play a role in attack. To play a counter with 5 players against a 2-man remainder defense is certainly more promising than a counter 2 vs. 2. The more decisive question – a question I asked all participants of the course – how often do you attack with numerical superiority? Not very often. It’s quite the opposite: almost all attacks are played with a numerical underload or with even numbers. On the one hand this is due to the opponent, who usually puts many players in his last line of defense, on the other hand almost all teams want to attack with an overload in the first third of the field. But why actually? Now the answer to this question confirms our second postulate. Using an overload during build-up results in minimal risk for the attacking team. Ah! Rings a bell? The numerical overload becomes particularly important the moment you lose the ball. If you lose the ball during the build-up phase, you’d rather have a 4 against 2 than a 2 against 2. However, if you constantly outnumber the opponent in the first third, it’s clear that you’ll have a numerical disadvantage in the last third.

This brings us back to the first postulate: In attack, it is not the numerical superiority that is decisive, but the positional and dynamic superiority. This is a good thing, because it’s rather difficult to establish a clear, constant numerical superiority in attack. Accordingly, the attacking- movements are all the more decisive.

This brings us back to the first postulate: In attack, it is not the numerical superiority that is decisive, but the positional and dynamic superiority. This is a good thing, because it’s rather difficult to establish a clear, constant numerical superiority in attack. Accordingly, the attacking- movements are all the more decisive. 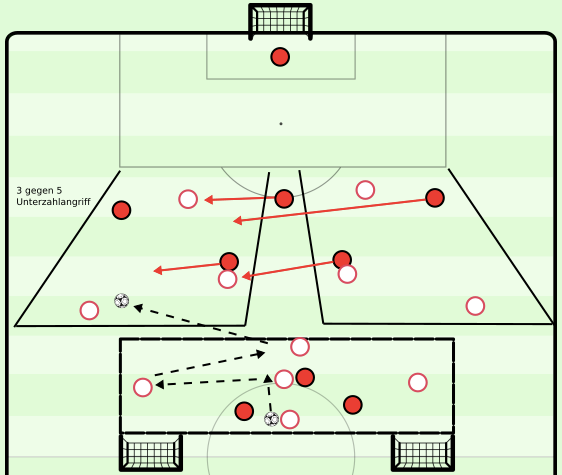 The following game should reflect the nature of the actual game, but on the other hand also implicitly provoke certain passes and runs because of the fields-shape and the restrictions, which do not have to be mentioned explicitly.

The game starts in a 5 vs. 3. We want to do justice to the nature of the game and as mentioned at the beginning, teams take little risk in buildup. In this first phase, the red players can take the ball and promptly break through the two mini goals if the white team loses the ball. However, because of the white team having the overload, it is go easier to counter-press and defend the mini goals.

If they can keep the red opponents off for at least 4 passes, they can then play the ball into the left or right funnel.

If the ball is played into the left funnel – as shown in the Picture above – the white players from the right funnel are out of the game. The red defenders, on the other hand, are all allowed to play into the funnel and defend the goal in a 5 against 3.

The white players are clearly outnumbered. The only way to achieve a breakthrough towards the goal is by a clever usage of positioning, use of opponent-binding-runs and playing with the third and/or fourth man. The goal must be to establish a positional and dynamic superiority despite the numerical inferiority and this way destabilize the opponent. However, the nature of this game also means that if the attackers lose the ball, the white team – due to its underload – is in a lost position when it comes to transitioning to the defensive phase of the game.

If the ball is lost, the rules for the white team can be:

This form of play usually has a very reproducible learning curve. In the first few attempts, the ball is lost very quickly due to static offensive movements and the resulting obvious number discrepancy. Without explicit assistance, simple double passes are used to outwit the opponent. In further consequence, so-called “third man movements” will appear and the opponent will be destabilized more and more. The decisive factor here is that due to the specific shape of the field, all attacks are played straightforward and all have a certain diagonality towards the goal. Also, the “third man runs” all have a given direction.

After several successful runs, the five defenders will adjust to this and the game will eventually meet its ceiling.

When this first phase of the game was finished, I added an extension to keep it alive. When the white team plays from the 5 against 3-Start-Rondo into one of the two funnels, the player who p from the Startrondo may support the attack. The 5 vs 3 becomes a 5 vs 4. The additional attacker usually chooses very aggressive runs and tries to breakthrough as a third or fourth man to bring a new dynamic. For the defenders, the attackers are more difficult to defend with the extra player running through.

Another variation is to involve one, two or even three players from the ball far funnel into the attack.

One source of inspiration for this game was this video: