Door 14: Up back and through

In today’s Advent calendar piece, we will talk about one of the most popular type of combination schemes, which is the up back and through. This type of combination is closely related to the 3rd man action, which I described in my previous piece for this year’s calendar . The most basic type of up back and through would work as follows: Player A has the ball and plays a forward pass to player B, ideally this would be the furthest possible flat pass and skip at least one line of players of the possessing team. Once this vertical pass is played to player B, he plays the ball back to player C who is invariably in an open position, as the pass is played backwards (a general advantage of often underestimated backwards passes). You could say that A passes to B in order to find C, something expertly pointed out to me by Judah Davies. When C receives the ball as the 3rd man in an open position, he would often be in an advantageous position to attack (facing forward, also often in open space). From there most teams would look to take advantage and penetrate the opposition backline. One crucial element of doing so would be runs in behind the opposition defense. This is usually from a 4th man, player D, who receives the through-ball from player C, completing the up-back-and-through action.

Why does this sort of combination work so often?  Firstly, from players A to C it involves all the advantages of a 3rd man play. When the 3rd man receives the ball from a back pass he is clearly in an open position facing the field. When this is the case the defense would very likely respond to this by pressing the player or at the very least orienting themselves towards him. If there is now a 4th man running action in behind the defense this should cause a severe overload. This run is also made against the grain of the ball movement, the ball is moving backwards (relative to the goal attacked) whilst the run is being made forward. This causes a very desirable counter-action which is hard for the defense to control and defend as a group. Moreover, with a 4th man added to the action a higher level of group tactical complexity is achieved. 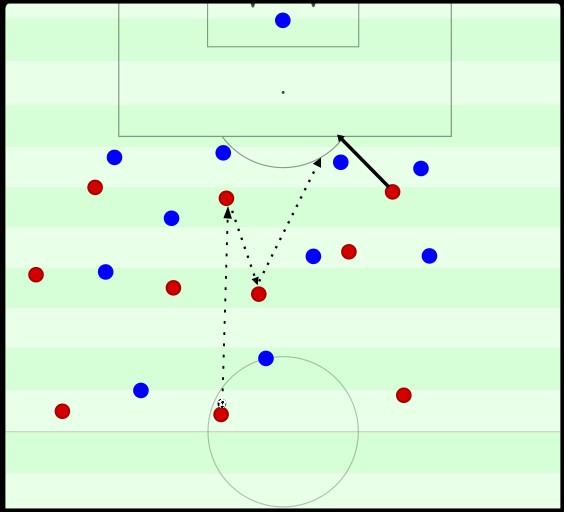 With the last pass of the action being a through pass, it can also be assumed that the 4th man in the action has a dynamic superiority over the opponent. With the defensive line facing the ball and probably moving towards it, the run in the opposite direction (already moving in the direction of the eventual through-ball) carries a significant head start that can ideally result in a clean run in on goal with a 1v1 with the goalkeeper.  If the 4th man arrives from deep there is also a significant chance that this player is just not within the immediate awareness of the defenders involved in the action.

There is another up-back-through pattern that is worth to explore. When watching videos of Pep Guardiola coaching online you can often see him coach the pass back to the original passer. The idea behind this is to draw the opposition defenders in to press player B. Player B exploits this pressing action by playing back to player A who originally passed him the ball. Ideally this return passed would be played slightly diagonal. Player A is now in a position to play to player C, most often into the space vacated by the players pressing player B. This kind of action could often be seen by Guardiola’s Barcelona especially in midfield where one would see a countless amount of return passes between Busquets, Xavi and Iniesta. This would often result in a penetrative 3rd line pass by the player that started the sequence. Essentially this is a variety to an up back and through action involving only 3 players. With the backwards pass not to a 3rd man but to the first man. 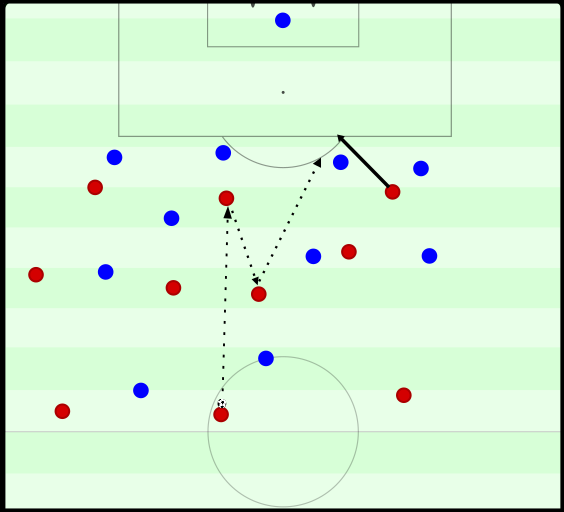 In the middle zone 2 teams play a 4v4 (can be more players, depending on your player numbers within your session or your focus). I usually started the game by playing into the middle zone, passing the ball to the lowest player in the middle zone. From there on it is a free game with the possessing team looking to play a ground pass to one of the two attacking players in the final third. This is a small and seemingly insignificant rule, it can however make a big difference in terms of getting a significant amount of relevant up back and through actions. Especially in junior development we look to minimize aerial balls into the striker as much as possible, and want to work on a flat ball progression frequently. 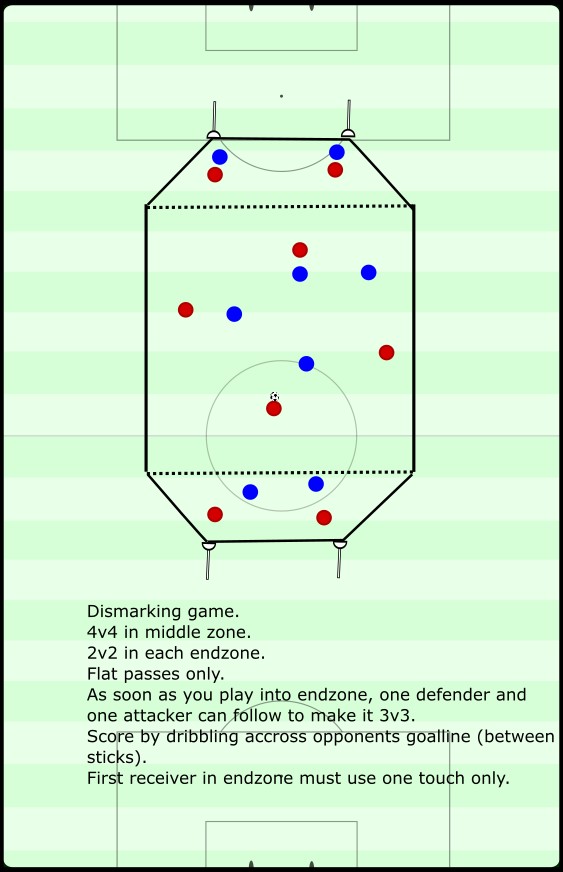 The strikers are restricted to play only in their zone, so are the corresponding defenders. This is something to possibly remove lift later on, but I prefer to start like this in order to get a certain repetition of similar situations (at this point it is important to remember that there are no identical situations in football). With this repetition provoking rule, up back and through actions become extremely relevant to score points.

The field shape is slightly cut off in the final third. This has a multitude of reasons. Firstly, with goals being scored by dribbling or passing over the goal line of the opposition, we don’t necessarily want this on the sides of the fields. We believe that breakthroughs through the middle and halfspaces are to be encouraged more frequently. Secondly, the cut of lines encourages diagonal actions through the halfspace from the side into the middle, which encourages a greater variety of up back and through actions. It also gives the attacker opportunities to make little movements to the side, which encourages the closest defender to follow him. This can potentially create a gap in the center, which can be used by following players with dynamic superiority, dribbling or passing and often creating a decision-making crisis for the defenders.

In the beginning of the game we often work with the rule that the first receiver in the final third has to play his first action with 1 touch. Whilst this could also be taken away later, it encourages a pre-orientation towards his support players, as well as well-timed supporting actions. We are using a bit of selective focus here, making the striker think about all sorts of different solutions involving combinations with support players, as well as how his movement can manipulate the defenders for the upcoming layoff. My experience with this is that you can get players to think in depth about different details like this and thus get creative in a manner aligned a playing style prioritizing todays principle.

The final rule is that as soon as a striker has played a 1-touch pass (to whoever). A follow up player from the middle third can enter into the final third, as well as an additional defender. From there the game is free and players must look to get across the opponent goal line in a creative fashion, success is rewarded with a goal. It would potentially be possible to reward a lay-off from the final third back to the middle with a point and then a subsequent successful scoring action with another 2 points. The field size obviously varies according to age group, player level, desired outcome and last but not least available space. I would use a field size similar to the one in the above picture (relative to a standard 11v11 field) as a starting point. With my players I did this game for something like 8×2 minutes (with 60 to 90 seconds rest) in between rounds. With this a higher focus would be placed on delivering quality at a very high match related intensity for a longer time, which should translate into a greater transfer into an actual game. Credit to Patrick Eibenberger for highlighting this aspect to me in relation to my last piece. 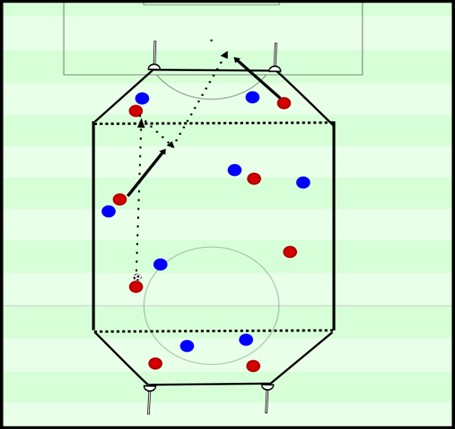 Within the exercise I find it important to put explicit focus on smaller detailed aspects that aid the team in ultimately executing the up back and through with variety and success-stability. Such aspects would include the strikers body angle towards his support (the third man). The team using a vertical pass to a forward as a trigger for support movements. This would be to create adequate distances in relation to the ball higher up the field, thereby decreasing the chances of a lost ball and offering a good variety of potential follow up actions. The movements of a 4th man should also be touched on. This can be either the second end zone player who opens up space or a late run from the middle zone.

The above Inkscape drawing would be an example of a desired outcome. The first red possessing player is always looking for the furthest possible flat pass he can play, and therefore consistently orients himself towards the strikers in the endzone. Before the striker receives the ball, he makes a slight movement towards the outside. The player nearest to him in the middle zone uses the vertical pass past him as a trigger for a support movement, slightly into the opposite direction to where the striker is moving. The striker realizes this and lays the ball off, but slightly diagonally opposite to where he is going. The other striker has thought a few actions ahead and opened the space. This caused the defender to follow him. Now there is a big central gap which the 3rd man uses for a through ball to complete a scoring action.

The above is clearly still an up back and through action, all be it slightly varied. When the coaching of principles and smaller sub principles is done without restricting players too much in the exact execution, one will find that players get creative and adapt the principles to suit the situation and create combinations like that.

This is done with a mixture of situational freezing, for which I would stop the time, concomitant praise and encouragement and a creation of a training environment that encourages problem solving within a certain playing style.

My experience has been that the above game requires a high level of understanding and execution of team principles and a playing style before scoring can become frequent. Therefore, I’d encourage to use the above as a follow up game to games such as lineball variations or the tube.

I believe that when teaching principles, it is important to remember that we cannot repeat exact situations. In the above game, conditions are created that favor the usage of the up back and through as a means to an end (scoring by dribbling or passing across the end line). This is further highlighted by potentially giving 2 points for scoring of the desired type of action. Once this is paired with adequate situational coaching and a good training intensity, the desired outcome is likely to be repeated frequently in different ways. This should create a deeper individual and collective understanding of the principle, and therefore create a good transfer to the game.