In today’s edition of the Advent calendar we will talk about a game that has become a cornerstone of the training program of my team.

The idea is very basic. Two teams of 9 players (can be more or less players, then you just have to adjust field length mainly) play each other in a normal game. The field is extremely narrow (usually the width of the 5-yard box, or slightly narrower) whilst having more length (to the halfway line or so). This means that we produce a game of extreme space and time pressure on the players. This alone has a few effects:

Firstly, the speed of the game is very high, which forces the players to adjust to this and perform quicker actions, as they have less time and also more actions (per minute). This due to the increased action speed caused by the small dimensions. Secondly, players need to scan the field a lot more frequently, as they are guaranteed to receive pressure when the ball is played to them.

And due to players close proximity to each other, the information scanned for changes more frequently (due to the high speed of play), but these changes also become more relevant to the receiving players immediate actions after receiving. Therefore, there is also a lot of quick play (with little ball-touches) naturally due to the high amount of space/time pressure placed on the players and their natural adjustment to these circumstances.

The main criticism of this game is that it can be quite chaotic and have a lot of unclean play. This is true; however, I do not view the chaos as a problem. In this ever-changing playing climate, with many turnovers and constant high pressure on the ball from all sides, players are placed under higher loads than in a standard 11vv11 game. During this, an important part of your coaching will be to encourage clean flat combination play even though it’s difficult to achieve initially and even though it’s close to your own goal on occasion.

The third man as a key to unlocking the combinative potential

When we first played this game, we found that the first flat forward pass was usually the key moment in possession. Players would build up from the back and eventually play flat forward passes into the middle part of the field. The player receiving the ball there would usually meet quite a lot of pressure (as is the nature of receiving a forward pass, the receiver is usually pressed from behind as defenders close the man down as the ball is underway to him).

Therefore, turning here (especially after a vertical pass) was a very rare possibility. In these moments, we encouraged the receiving player to play a 1 touch pass to a third man (either diagonally behind them or even to the side). As the initial receiving player is put under pressure by the opposing team (by the players physically closing him down) but also demands their attention (fields of vision), the third man will usually receive the ball with less pressure (whilst also facing forward as is the nature of receiving a backwards or sideways pass).

The above point is illustrated in the image above. The center back progresses the ball vertically into the midfielder (who receives pressure from two sides, and can therefore only turn with an extremely high risk of losing the ball). However, the receiver has scanned the field and knows where his third man is, therefore he can play a 1-touch diagonal lay-back into the center of the field where the player (in green) finds himself in space and with a forward field of vision.

From there, the same type of combination can be used, whilst there is an infinite possibility of other ball progressions. The game is usually quite open from there for the attacking team as the initial ball progression has been successful and stabilized (by the third man pass).

“There is no way to beat the third man”- Xavi Hernandez

What I often find when observing coaches is that they coach their players to scan the field frequently. Whilst there have been scientific studies confirming the importance thereof statistically, and masterful midfielders like Xavi or Sergio Busquets scan the field over 800 times per game, very few junior players actually know what to look for in these moments.

Within this game form, we usually play with the rule that a successful 3rd man combination (with the second pass being 1-touch pass) gives a point (while a normal goal gives 2 or 3 points). This conditions the players to scan purposefully for the third man (next available team-mate whilst also looking for opposition players closing down) increasing combinative speed and orientation which inevitably causes rifts in the opposition defense that can be exploited with quick combinations.

Within this basic framework we are clearly working on positional and combination play whilst creating a playing style based around combinations and dominating possession just as much as purposeful flat vertical ball progression, generally creating a dynamic interpretation of a positional style of play.

The first variation of this game is a 3-zone form. Players can move free in all 3 zones. However, when a pass is played from the defensive to the middle zone, the first receiver has to play a 1-touch pass (further accentuating the above point about accentuating the 3rd man). Besides that, we played this variation with the rule that a 3rd man (1-touch) pass always yields a point while a normal goal counts for 3 points (just like in the basic form). In this variation the line between the middle and defensive zone also serves as an offside line.

Another variation is to divide the field into two zones with a vertical line. This line can be used as a basic orientation point. When the ball is played forward vertically (on one side of the line) a 1-touch pass from the receiver is a commonly used next move. If the forward pass is diagonal however (across the line)  the player receiving it will have an open field of vision and more touches can be used (usually).

The same 3rd man and scoring rules is used as in the base version, and it would very well be possible to also weigh diagonal or vertical combinations differently depending on session focus or opposition specific preparation.

An example of opposition specific preparation is the below variation:

For our cup final this year we played against previously undefeated Hellenic FC. We analyzed the opposition and decided to switch to a 4-1-2-1-2 diamond formation for the game. Within this formation, the role of the outside defenders was particularly important to us. These players were not only the sole providers of width (starting out) but also carried some heavy weight in the buildup.

We wanted to play them the ball if the combination in the central diamond wasn’t possible. From there, these players were instructed to play diagonal passes into our #10 or into the striker (who would usually drift slightly into the half space and play layoffs into the midfielders who would look to play through). Practically by-passing the oppositional press and getting into forward facing midfield positions via an alternative route. Illustrated below: 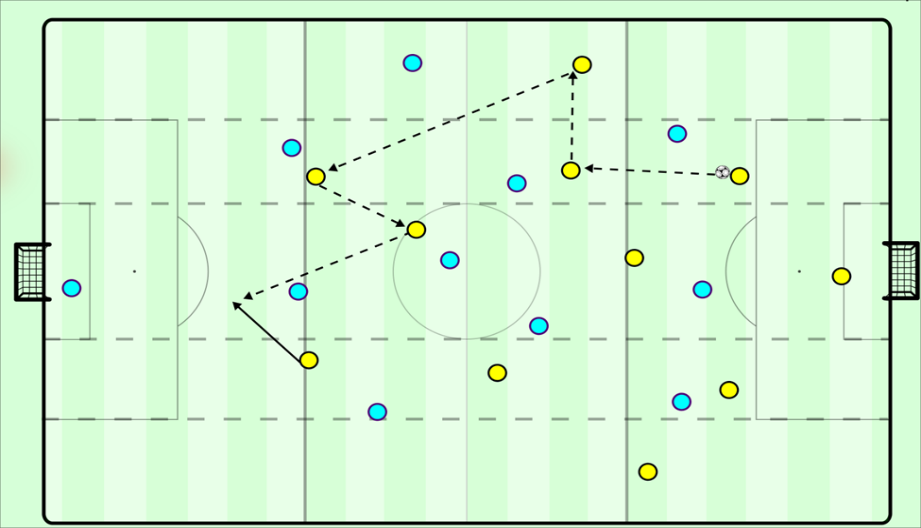 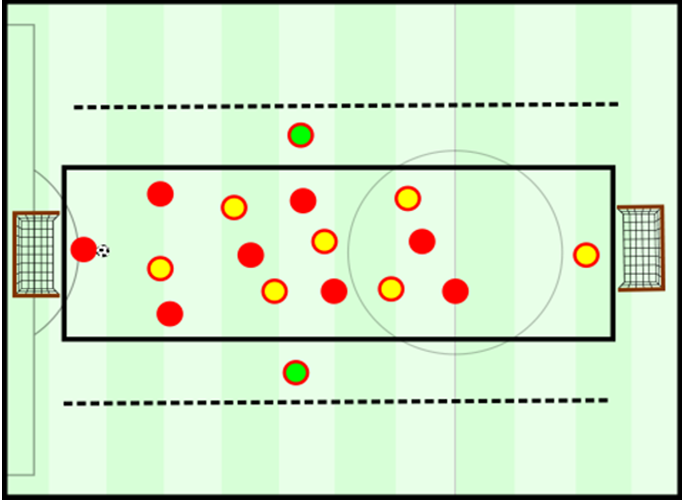 Therefore, we created the above variation. The 2 players tasked with playing these roles in the cup final where placed as green neutral in the small wide channels next to the tube. From there they would play as supporting players for the team in possession using the entire line to move freely vertically. They were instructed to play with only 1 touch, initially their passes had to be forward also, but later on we just made the rule that it had to be to the third man and flat. This overloaded their orientation, but as always, after a few minutes of adaptation we saw some beautiful progress. We ended up winning the cup final 2:1 with the right back providing an assist for the winner.

I generally play this game as a final part of my session, though I have used it as a main-part too. Within this, I usually play 4×3 minute games (90 seconds of rest), with the teams competing to see who can win more games in total, with the score starting at 0:0 after each completed round. This is also demanding for the coach, counting all the third man goals, but one becomes used to it after a while and of course if an assistant coach is present it is even easier.

My coaching points include the 3rd man (as stipulated exhaustively above), scanning (where to), central occupation, distances and layers in possession (variations could be made focusing on this too) as well as having little side switches using the little width on offer maximally (conditioning little center to half-space or half-space switches).

Finally, it is important to once again reiterate the importance on positive coaching and encouragement. Encourage flat and constructive combination play, some players might want to boot the ball away instead of playing through the tight spaces. But in these moments it is important to coach the players to keep trying (even if it goes wrong occasionally). My finding is that if they do remain constructive within their combination play they quickly adapt to the challenging conditions set with an excellent transfer usually taking place to the actual matchday, where the principles worked on in this conditioned game now need to be implemented.