When designing a training session, the thought process of the coach typically involves devising activities or games that elicit situations where the coach can make corrections or improvements to identified behaviors. As a planner, the coach has a certain amount of freedom to manipulate the numbers, rulesets, or environment to support these objectives.

However, particularly with the recent push for more game forms in training and maintaining realism within activities, it can be confusing about the boundaries a coach can push between promoting certain player or team behaviors, while still keeping the realism of the exercise or game. For instance, it can be difficult to train counter attacking in a match form when one team is dominating the other, particularly getting repetitions when the suffering team can barely sniff the ball.

This piece will outline a few ways to navigate that, alongside considerations for devising your own adjustments to any training sessions.

This first example comes from this positional game, in which there is a counterpressing focus added. The structure of the activity is as follows: 8 attackers against 5 defenders, keeping possession in roughly a 30 x 25-yard area. The attacking team scores points through registering a certain number of passes (which can be manipulated based on the level of your team), while the defensive team aims to score in one of the counter goals on the outside to get points.

When the attacking team loses possession, they can counterpress and win the ball back from the defensive team to prevent them from scoring. Touch restrictions can be added based on the level of your players. To encourage a higher intensity of pressing, shorter timed intervals are recommended (senior level players: 45 second to 1-minute intervals).

Common coaching points in possession that are used in similar positional games apply here: positioning of players, looking for the deepest/furthest pass look for numbers open, make decisions before you get the ball, details regarding orientation to face away from pressure and timing of movement to receive the ball, and all of those aspects under pressure of ~3-4 players in a tight area.

Considering the numerical superiority of the attacking team, the pressure situations however are not guaranteed over the spell of the interval. Therefore, the coach can manipulate the activity to ensure pressure in key situations. 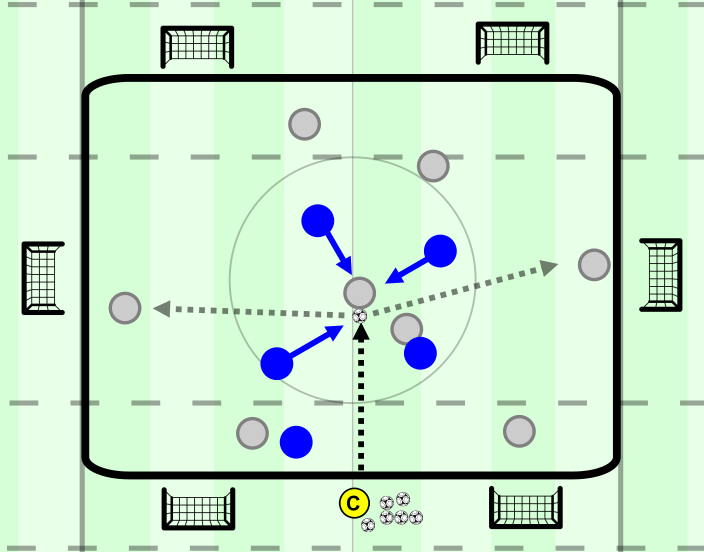 The graphic above shows an example of how to create the pressure – through the way the exercise resumes after the ball leaves play or a goal is scored. By deliberately serving into heavily concentrated areas defensively, players in tight spaces are forced to scan to assess the direction of pressure and possible options out of it. Typically, coaches serve passes into open areas as a safe mechanism of starting the activity. However, through fabricating this situation, this accomplishes exposure to the high-pressure situations intended in the activity.

Naturally, the first few instances of this method to restart will lead to some errors as the players acclimate. Some explicit reinforcement may have to take place before the desired dynamics kick in, but once the settling has finished, some very good dynamics occur regarding quick pressure breaking actions from the receivers, alongside supporting movements moving quick and more responsive due to the increased defensive intensity.

These high-pressure situations are becoming more prevalent in the modern game due to the faster demands of pressing alongside increased compactness and improvements in defensive organization and distances. This small tweak to an activity to greater expose players to pressure is just one example to how a coach can take creative liberties to purposefully create situations to then adjust player behavior within an activity.

The first example dealt with a way to elicit a specific individual behavior based off the coach manipulating one aspect of the rule of restarting. These next two examples deal with adjusting the rule sets of the game and can be adjusted whatever your topic is or the responses you want to get from your players.

This game form (8v8+1) follows the normal laws of the game except for two aspects: how goals are counted and the method of restarting post goal. Goals are only counted if all attacking players are in the opposition half at the time the shot is taken, and once a goal is scored/counted, the scoring team gets the ball back, commencing play again through the goalkeeper. 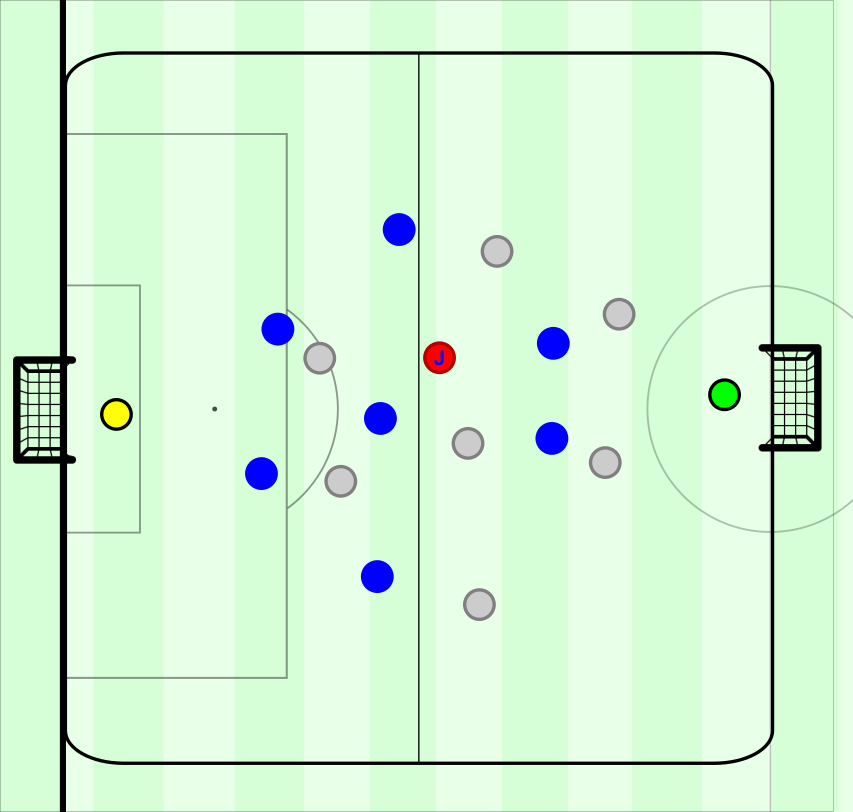 What will the effects be of these changes? The positioning in the opposition half rules is designed to provoke advanced positions in rest-defense, plus a general sense of proactivity as a team progresses up the pitch. Counterpressing becomes more favorable due to numerical and territorial dynamics, alongside creating more numbers for support in the opponent’s half.

The real beneficial elements of these modifications come out after goals are scored, and this element will require some explicit coaching at first to get the immediate imprints into the player behavior.

This format can be used while addressing counterattack defense, high pressing, or build up play, but it is flexible with its uses. After a goal, the range of results will veer between quick progression into the opponents half if the opponents are slow to push up, or stifle the opponent’s build up if the defensive team take up strong positions in their pressing, and the happy medium outcomes between as well that resemble deeper build up or higher pressing situations.

Such adjustments in the session design and explicit reinforcement from the coach will create more of these desired situations to teach and improve. The number of goal kicks in a 90 minute match is around 17 on average, so this manipulation will ensure more repetitions in a highly impactful phase of play in a wide variety of game models.

Lastly, we move from explicit reinforcement of behavior to implicit. Rather than alter the restarts or criteria for goals, we move into changing the incentives for how goals are scored in the first place. Adjusting the values of certain outcomes to promote certain behaviors is hardly reinventing the wheel, but prolonged exposure to adjusted incentives can dramatically adjust player behavior over time. Going off the assumption that all players want to win (a very basic assumption), these adjustments will then impact the players involved.

Using the same game format as in Example 2, with normal laws of the game. Now however, normal goals count as 1 point, one touch finishes score as 2.

Of course, there will be more one touch finishes. That’s not the only result however, as since one touch finishes are higher difficulty actions, more shots will be taken closer to goal or following combination play, leading to higher speed actions in the final third, alongside more speculation for rebounds and cutback actions. Over time, the attacking actions will be higher quality, meaning shots will have a greater chance of scoring, due to being taken in better locations and against a less prepared goalkeeper/defense for blocks.

Games themselves become more competitive, as it is easier for teams down goals to come back (“We just need to 2 1-touch goals” vs. “We need 4 goals.) Through inserting yourself as a guide for player problem solving in these moments, probing teams with questions rather than solutions, each team also develops ownership of how they aim to exploit these scoring discrepancies to win.

The result can be some incredible, self-driven games from the players, subconsciously doing the actions you are aiming to teach while performing them given their own abilities through creative problem solving as opposed to a “one size fits” all approach.

Issues that the coach must be careful with is the incentives themselves, as they must logically fit the goal of the training session, be compatible with the game model, and be attainable for the players. For instance, in a session really focused on counterattacking, having a scoring adjustor of “Number of passes before scoring = number of points” would not make sense, as the incentives would be to pass extra rather than drive to goal quickly. For lower level players, have a point modifier for volleyed goals would likely be too much of a challenge and lead to players prioritizing improper areas for their development.

Numerous aspects of a football match and training session are beyond the control of the coach. Players make their own decisions and the coach does not script or choreograph the game in its entirety, and therefore must accept a locus of control that is not all encompassing.

However, the coach can control a lot more than he thinks about the way each team performs in the game through the environment of the training sessions, even if it is simply through setting guidelines that implicitly tweak player’s behaviors. There are arguments about whether setting these sorts of rules and adjustments to the game form takes away from the realism of the game, as for instance, all goals only count as 1 point, or there is not a touch restriction in place in open play.

This is a line that the coach must be careful about and just knowing what they are missing in the other direction. If every ball out of play starts from the goalkeeper, there is not exposure to training throw-in situations. If most game form elements do not involve game realistic width, players will be not be familiar of how to use width in the game.

In the development of a style of play and game model, these considerations have to be considered to determine what situations are the “highest value” for your team, and to create training activities that promote those value situations. Knowing the other side of the coin is key too, to ensure that players are not being neglected in instructions about “lesser value” components of the game according to the style of play.

Lastly, as Mortiz Kossmann discussed in Door 8 of the Calendar, these activities to promote a certain game model or style of play fail to be effective if the players first and foremost do not understand why these behaviors are beneficial to their play. If players do things they do not believe in, they will be unable to implement them when they are encountered with resistance on the match day and deviate from taught actions and methods.