What exactly does this principle mean? On a collective, structural level, it could be in reference to the common rule in positional play: have no more than three players in the same horizontal line, and two in the same vertical line. This general rule of positional play is a good starting point for our principle today.

By implementing this, you can create staggering in your team’s positional structure in possession, which in result creates triangles, diamonds and greater interconnectedness between a team throughout the field.

Your positional structure also influences how your team defends in transition, and in this case, the greater the staggering and occupation of different zones/spaces on the field, the harder it will be for the opponent to “release the pressure” (that is if you counterpress of course.)

The setup for this game is a square that is 28x28m, and is split up into 4 vertical and 4 horizontal lanes, totaling 16 boxes that are 7x7m each. Inside the square, a 4v4 takes place, where one team always starts in possession. On the outside of the square, one player occupies each side, playing with the team in possession.

As this game is directional (2-way), the possession team must play to one end player. Once this happens, the team in possession now builds up to the other side. 8 mini nets are placed around the field. The field itself is situated centrally around the halfway line, simulating that the team in possession is setting up possession in the opponent’s half. Accordingly, there are 4 mini nets in each half, creating the same situation no matter which end player gets the ball first. 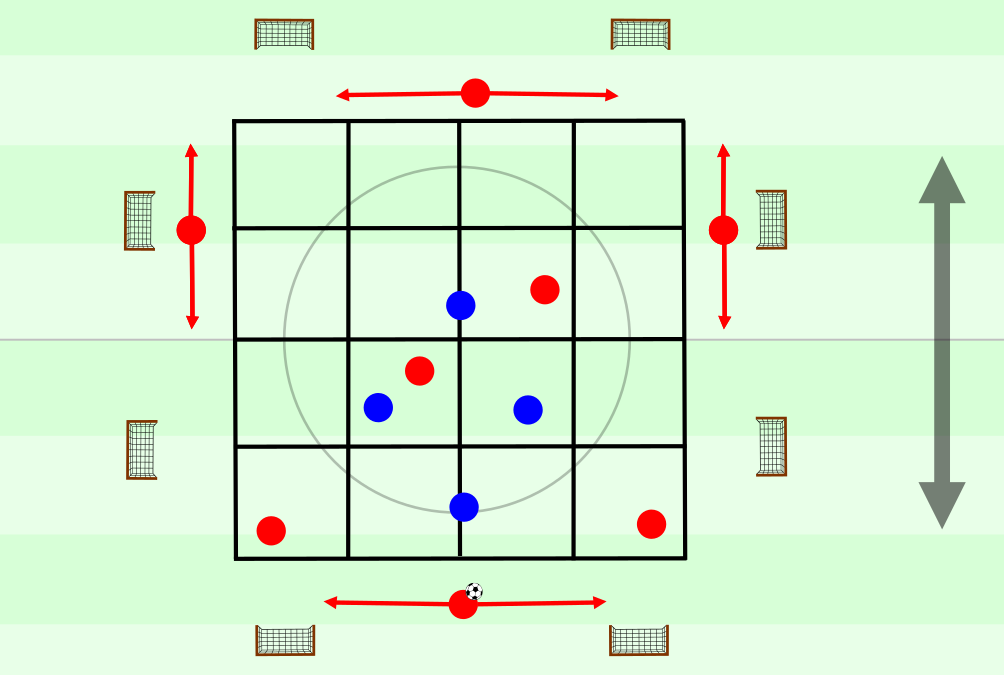 The rules and structure make this game very conceptual and give it a rather implicit focus. The constraint of having no more than 1 pair of 2 infield players in the same horizontal zone and only 1 player in a vertical zone implicitly forces the infield players to constantly be orientating themselves and moving into a space/zone that is not occupied by their teammate.

They are consequently either forced to react to a movement into a new zone made by a player moving either away or closer to the player on the ball, or they are the ones that initiating the movement themselves. This creates many situations where players need to move away from the ball carrier, and occupy advanced positions.

Consequently, it implicitly forces players to realize that they might not always get the ball from the current action, but could be the receiver in the next action. The field is also relatively small which overloads the players in their capacity to orientate themselves in accordance to their teammates and opponents.

Naturally, mistakes will be made with positioning as players will be too slow to react and move into an unoccupied space to make themselves a passing option for their teammate. From my experience however, the players are able to execute it better after one set. This is also aided with the extreme overload in possession players vs pressing players.

Getting a point for playing from one end to the other creates a clear reference for the players in possession. Playing into the highest player should always be the first option. Infield players should thus constantly be orientating to their outer field teammates, and occupying a position in their current zone that does not block the passing lane their teammate outside the field.

Having 1 or 3 touches for the outside players allows for various possibilities. On one hand, a 1 touch bounce pass creates situations for third man actions with inside players, or quick switches.

On the other hand, having three touches creates the conditions where inside players have time to adjust their positioning and move into unoccupied zones if necessary. It also creates greater intentionality for the player on the ball, as he is able to show where he might make his next pass (control, touch out of feet in direction trying to pass to).

The 8 nets surrounding the field give clear reference to both teams. For the team in possession, if they execute the drill properly, they will be in a position where they can block a clear path to all 8 goals. For the defending team, it creates numerous possibilities of what to do when they win the ball (secure possession by scoring on a net in their defensive half, or attacking if they win the ball in the opponent’s defensive half)

How I would coach this exercise depends on a host of factors. The structure and size of the field was designed with the intention of working with older aged academy players/ senior players who have experience (at least half a season) in playing a positional play possession game and are adept in tight spaces. Variations of the structure and constraints of this game could vary.

For instance, you could just split the field into horizontal zones or just vertical zones, and promote the same rules for the respective zones. This brings down complexity, and will lead to a greater learning effect for players who do not have a good understanding of when to drop/when to stay high/ make themselves available as a third man etc.

Score in the game is another factor to pay close attention to. As coaches, we are serious about what the score is in a game, but rarely do we focus on how the score in the game in the current moment governs our players decision making. Setting up different scenarios where you are winning/losing/drawing, and at certain time periods of the game, could help recreate what might happen in the game against a particular opponent.

Maybe in this game, the possession team is winning 2-0 in the 75th minute against a weak team. Depending on your game model, points could be allocated for playing the deepest, and two side outside players a certain amount of times. This could effectively slow down the tempo. Allowing more players to occupy the same horizontal line could promote a more risk averse possession game, something that could be a resulting behavior from winning in the later stages of the game.

You could also achieve this by changing the dimensions of the field, perhaps making the field wider, to allow for more switches. Either way: A setup like this allows for multiple adaptations which can easily be created individually based on your next opponent or on other factors.