Door 8: Option oriented pressing versus playing between the lines 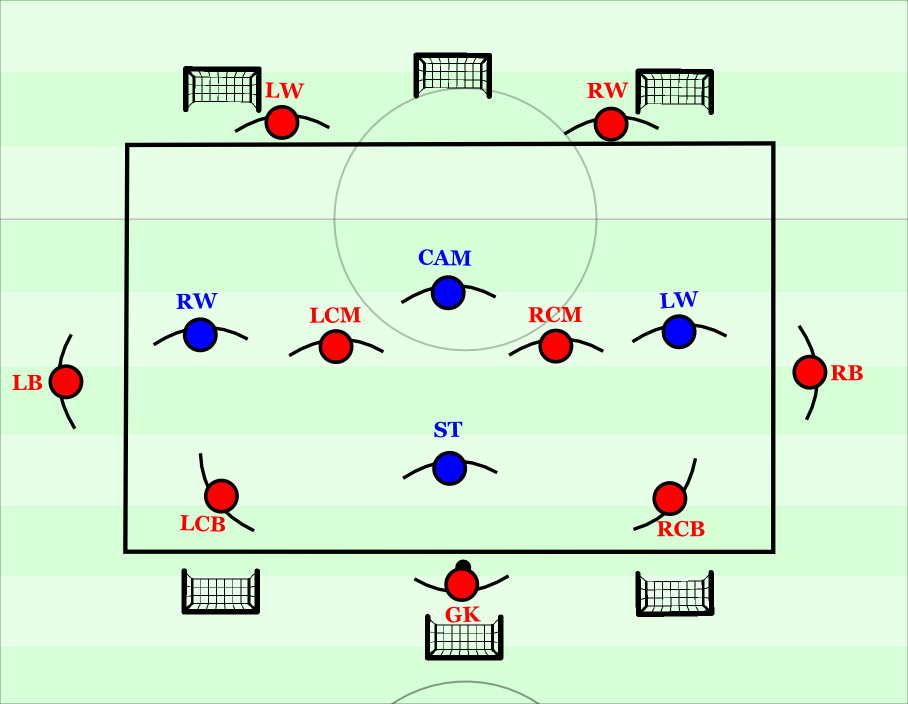 For both sides, scoring in the central goal would give 2 points, whilst the wider ones would equal 1. Furthermore, the reds can earn a point by making 5 passes, whilst 3 passes upon winning possession would give the blue side one point.

I designed the base positioning and number of players as shown above to work on build-up and pressing in the 4-2-3-1 shape my U15 side currently use. I put my front four players on the blue side, helping them form an understanding of pressing from a 3-1 structure. The back four and double pivot work together learning how to support the ball carrier and keep as many passing options open as possible in a 2-4 structure. Furthermore, the wall players learn how to adjust their positions to offer for longer vertical or diagonal passes and using lay-offs to escape the pressure they would face in a match.

Giving both sides points for passes is used to encourage pressing and counterpressing. Since the reds can score points by simply keeping the ball for 5 passes, the blues are forced to create access to the ball, rather than simply drop and block the goals. Likewise, the blues can score points for each 3 passes they make, as such the reds need to create pressure in the area after losing the ball, as well as blocking the goals.

Since scoring in the central goal is worth 2 points, a central focus is promoted in the exercise. This leads the possession side to focus on building through areas that allow them to potentially score in the central goal. Likewise, for the blues, in the aftermath of winning the ball the priority becomes to work the ball into a central position on the counter.

Conversely the blues are taught to defend the centre of the field as a priority, whilst the reds are taught to recover central positions as quickly as possible after losing the ball.

Field shape and number of goals

The field is quite a short and wide rectangle. In addition, there are 3 goals at each end. This creates an environment where actions that change the point of attack are indirectly rewarded. Switches are implicitly presented as a strong way of relieving pressure, as well as opening new routes to advance. I find this particularly useful at youth level since overly vertical instincts are very common.

Since there are 3 goals and only 2 wall players, the wall players are encouraged to drop into the rectangle to create pressure when their team loses the ball, as they cannot simply drop back and block all the goals. This is vital in ensuring the forwards develop the backwards pressing instinct when the team loses possession.

The pressing side (blues) defend with a clear numerical underload, and this leads to a number of desired defensive behaviours and instincts. Due to the underload, each player has to defend against two or more opponents in every situation, this immediately leads to “zonal-esque” defensive behaviours. This encourages the players to “guard passing lanes” by taking up positions between opponents, allowing them quick access to potentially press or intercept a pass to either (Also known as “half and half positions”). 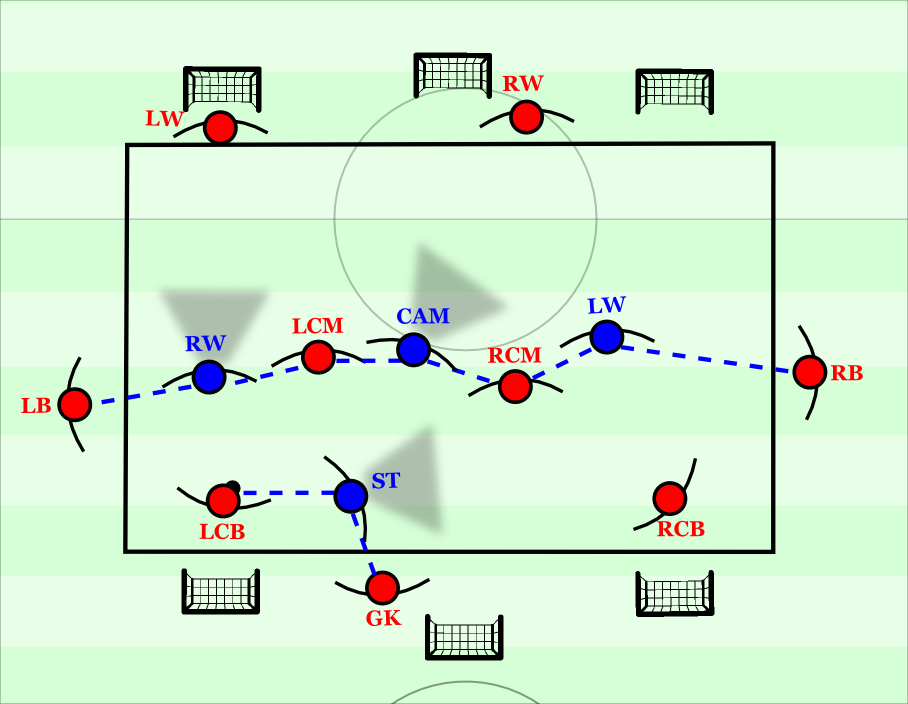 As mentioned above, the points system means the blues have to create access. However, the priority of preventing the opponent from advancing remains, since there are more points to be lost if the opponent scores than if they simply keep the ball. As such, the pressing side have to wait until the necessary passing lanes are blocked and guarded before pressing the ball carrier to avoid being easily outplayed.

With the blues focused on retaining access to more than one opponent each, the reds are implicitly taught the importance of separation movements. By increasing the distance between themselves the reds make each passing lane wider, in turn making it harder for their opponents to accurately guard them.

Whilst the implicit design of the game encourages most of these things, explicit interventions from the coach can guide the players’ attention to specifics of how to achieve what the game promotes. Furthermore, by matching explicit instructions with the game’s implicit design the coach key messages can be reinforced.

Perhaps the most important thing for the reds to learn is how to move to create as many passing options as possible, and thus support the ball carrier. In short learning the effect of their positioning on the team’s ability to keep possession.

When coaching this, I emphasised the importance of creating “diamonds” in possession. When a centre back has the ball, the full-back, near central midfielder and near wall player can create a diamond, giving 3 options for the carrier to bypass the opponents’ pressure whilst moving forwards. 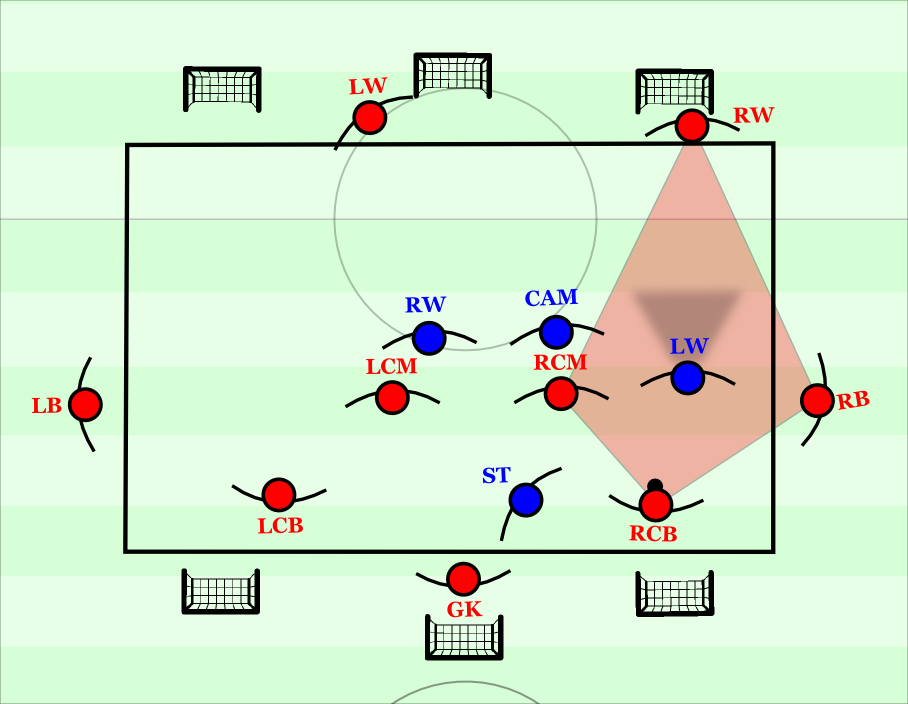 A vital phase for the team to support, is when a full-back has the ball, particularly how to escape pressure on the wing when the route forwards from the wing is blocked. The nearby centre back has to move to provide a back pass option by dropping as deep and wide as possible. Again, this separation movement forces the blue striker to leave one (or both) of the centre backs open, allowing the possession team to re-circulate.

By blocking the pass to the wall player, the blues effectively cut the team’s initial diamond. The positioning and movement of the midfield players is thus vital in creating a new usable diamond to escape pressure and re-circulate. 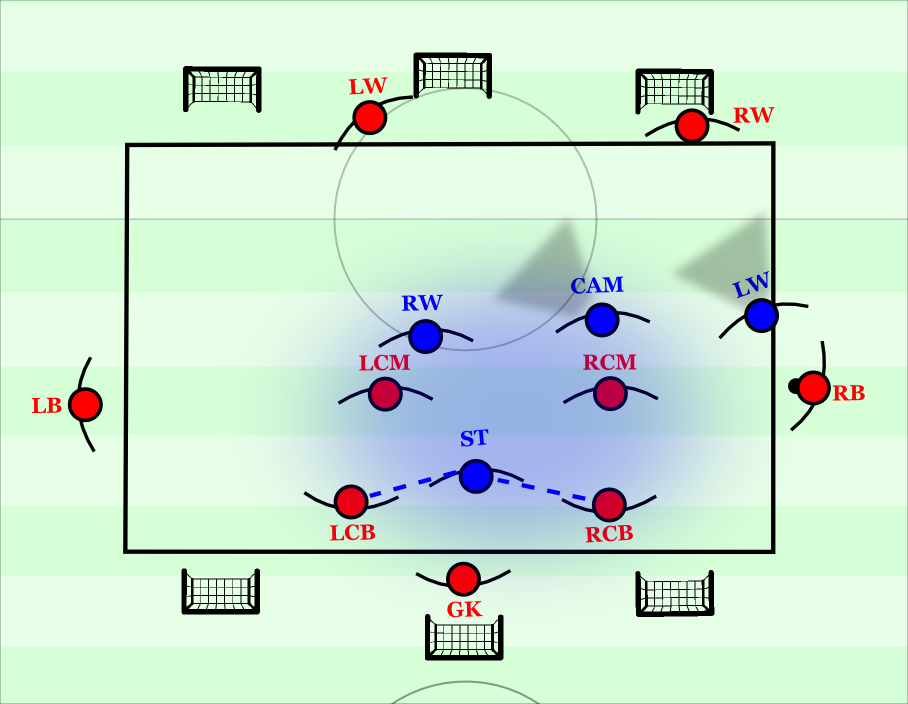 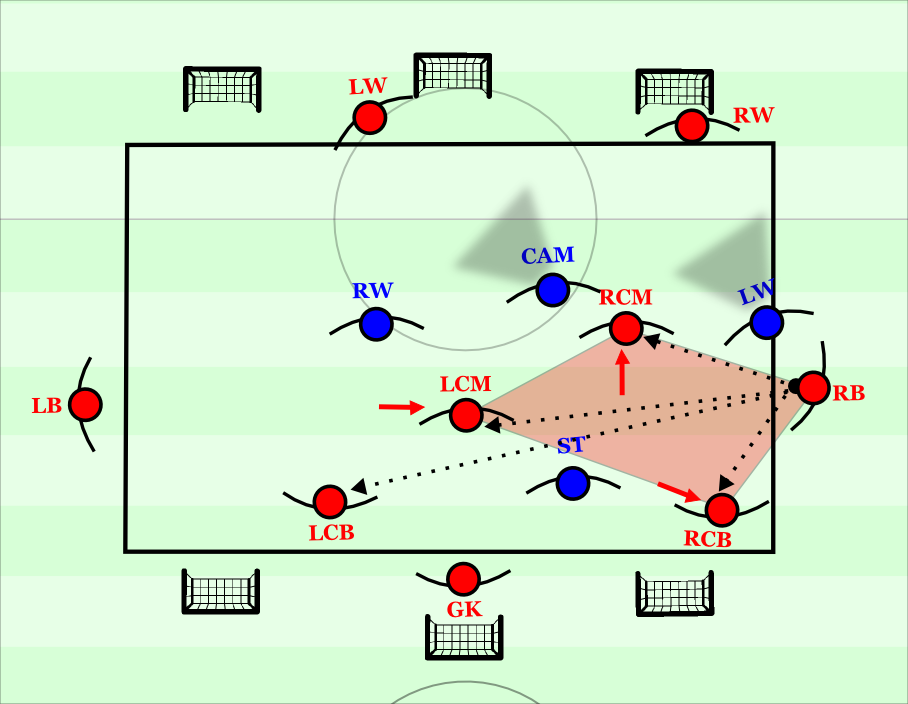 As explained in the implicit design section, the defensive underload leads the blue players to defend by guarding passing lanes as a priority, before making anticipatory movements to create access since they each have multiple opponents to defend against.

For the reds this means that in many situations the ball carrier will have time and space, as well as more than one potential passing option. The reds can thus be encouraged to use disguise on their passes to manipulate the opponents, and create wider open passing lanes.

Two types of disguise I often coach are deceptive use of the eyes/body position, and feint passes where the carrier acts like they will make a pass and stops just before contacting the ball. With both of these, opponents can be deceived into moving out of position earlier, opening other passing lanes in the process.

As mentioned in the implicit design section, the two wall players have 3 goals to cover in the aftermath of losing possession. If they stay in position, they have little chance of preventing the opponent scoring in one of the goals. However, the closer they are to the ball, the larger their cover shadow becomes. As such, they should be encouraged to move into lanes between the ball and the two closest goals whilst working back to create pressure. 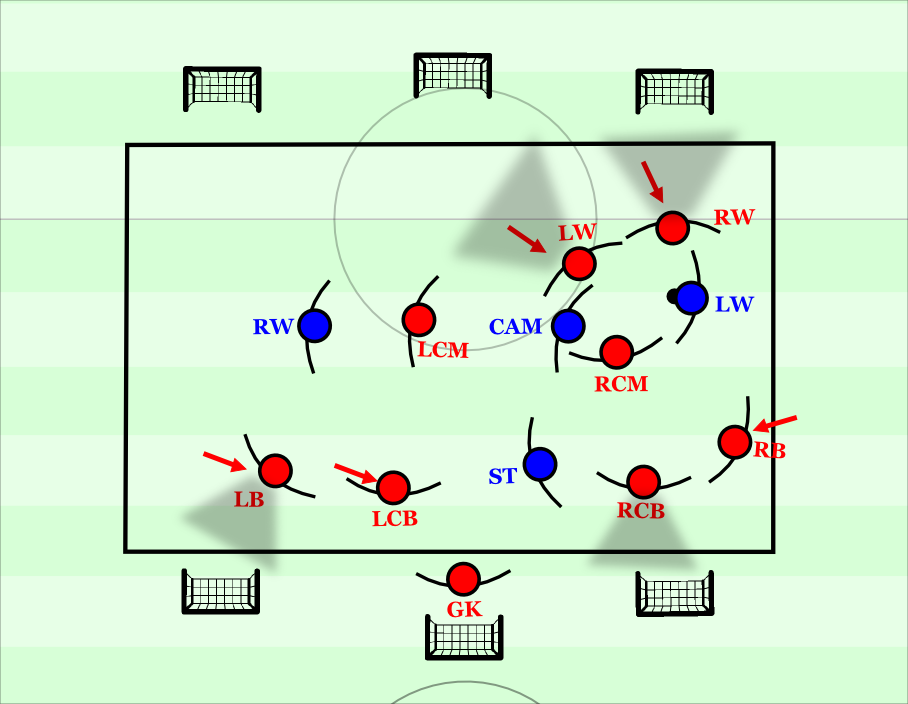 Perhaps the most important skill the blue side develop is their attention to passing lanes. Before, during and after every pass from the opponents, the pressing players need to be aware of their positions in relation to the opponents and the possibility this gives them to prevent or guide the reds’ circulation.

An example of scanning during this interval from Napoli’s Lorenzo Insigne:

Lorenzo Insigne (LI ) is very good at attending to passing lanes. Watch everything he does in this scene pic.twitter.com/zrJ112vp48

After winning the ball, the blues will naturally look to score in one of the goals as quickly as possible. However, they may need reminding that 3 passes and above also wins them points. As such, if the opponents react very quickly and block the goals, the blues should be encouraged to keep the ball within the area.

It should be emphasised that passing in this situation is done to draw the opponents away from their positions and potentially open the lane to one of the goals. As such they need to scan to understand the effect of each pass on the opponents’ positioning, and be ready to attack if the situation presents itself.

The game can be played without a goalkeeper, simulating build-up in more advanced zones where back passes to the goalkeeper become less desirable. Without the goalkeeper the back 4 would have to adjust their positions more frequently, both in possession and in the aftermath of losing the ball. This could lead to a better understanding of build-up movements for the defenders.

Although this particular version was designed for a 4-2-3-1 it’s possible to adapt it for different formations. Furthermore, this version focused on the 4-2-3-1 both for the pressing side and the possession side, but it may be useful to adapt one of the teams’ structure based on opponents. 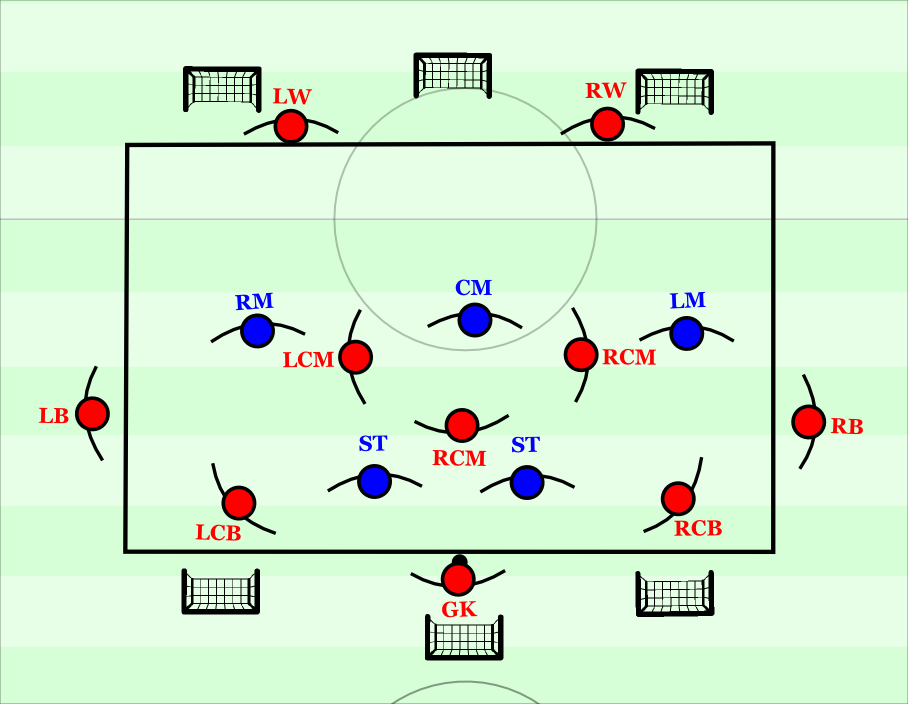 The above example shows a potential adaptation, working on build-up in a 4-3-3, against a 2 striker pressing system.

The points system can be adapted for specific objectives. For example, if the pressing team do not block the centre well enough, or if the red defenders don’t prioritise looking for central passes, a point can be introduced for passes into one of the midfielders.