by an anonymous guest author

However, it should not go unmentioned that the following exercise also includes interactions between players which basically take place in the 2nd and 3rd third of the playing field. In this exercise, special attention can also be paid to defensive behaviour. 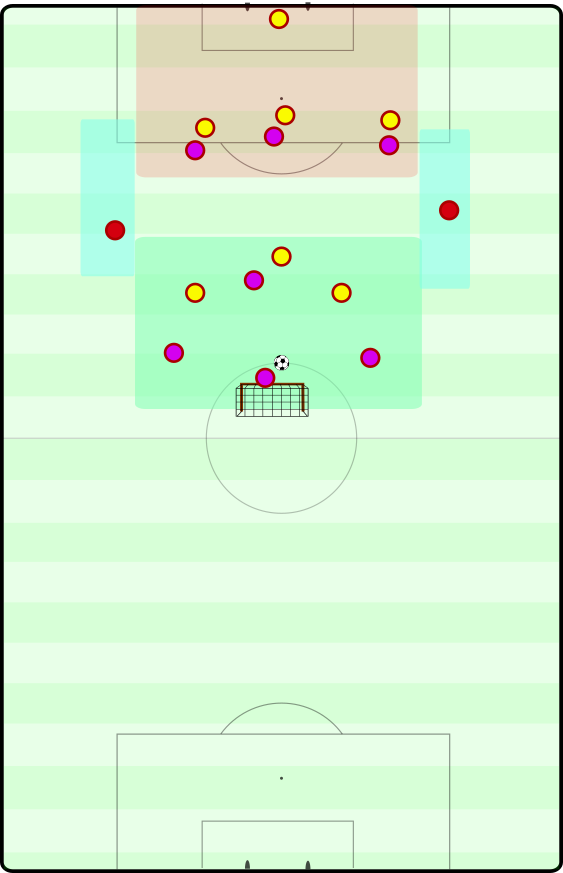 The goalkeeper of the respective team is positioned, together with his 3 players in the build-up zones, the 2 jokers and the 3 attackers of the attack zone initiate the attacking game.

The Jokers can either support in the blue field as fullbacks (maximum 2 touches) – or offer themselves as inverted fullbacks in the middle zone to continue the game forward. The attackers may enter the middle zone to lay-off or to take on defenders. After the striker has layed-off, Joker + 1 player from the build-up zone may join the attack. 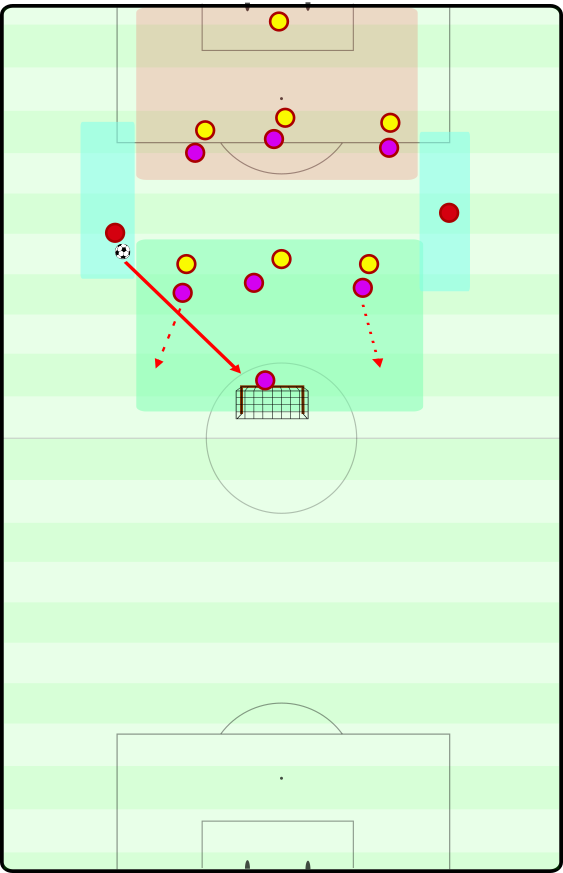 The game always starts (see graphic 1) with a backpass from the fullback to the goalkeeper. The backpass is deliberately chosen to “condition” the central defenders immediately to an opening movement in a sprint when they pass back to the goalkeeper. If you want more game-flow after a certain time, this rule can also be changed.

If the opposing team wins the ball, a counterattack is allowed. Then the game starts again with a backpass from the outer defender.

In the attacking zone, the game must be completed within a certain number of seconds.

Getting open for a pass: The goalkeeper should always position himself in such a way that he can be played to (this will often also be the case next to the goal) and keep as large a distance as possible from the most dangerous pressing-striker.

Orientation: Just as for outfield players, the goalkeeper must be able to see as much of the pitch as possible. If the goalkeeper passes to the left to central defender, the field should be scanned during or after the opening up-movement to the side to be ready for the next action after a possible back pass.

First touch: The first touch of the goalkeeper should be made depending on the behaviour of the pressing-striker and my teammates. Especially “La Pausa”, i.e. keeping the ball with you until you have tied the opposing striker, is an important tool here. Not always is the fastest continuation of the game the optimal one. 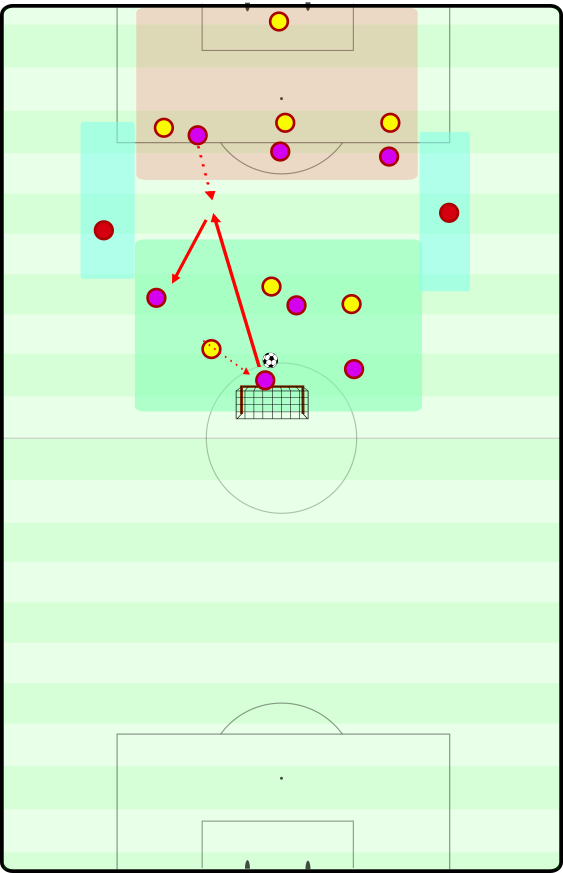 Another interesting possibility can be the goalkeeperdribbling, in which the goalkeeper passes the pressing-striker with the first touch. Maybe another time I will find the time to write my own text on this topic, to get an idea of it we have linked a video below.

Opening up for a pass: By the rule mentioned above the central defenders are forced to perform an opening sprint for a backpass – this should always happen in such a way that they can get the ball in an open body position in playing direction. Likewise (if necessary) an immediate  passing option should be created after pass to the fullback by opening up towards their own goal.

Central defender’s feint: Especially using the first passing option outside (joker/outside defender), the central defender can fake a pass to the fullback to pass the striker with a dribble.

Readiness: Be ready to be played as 3rd man from the middle zone after a lay-off. A typical action here would be a pass from the goalkeeper, who previously let the striker come to press him, whereby the central defender is free as the 3rd man. ( see graphic 2)

Orientation: The central defender must constantly orientate himself where his deep passing options are, taking into account at the same time how great the pressure of the pressing striker is to solve the pressure situation if necessary with a pass to the goalkeeper or 1st touch to the opposite side.

Positioning: The fullbacks should adjust their height according to the pressure of the other player and the positioning of the opposing striker. They are also allowed to enter the centre zone as inverted fullbacks. (see graphic 3) It is important to have the right timing for this. So the fullback should only move inside, if he really is an option for the goalkeeper or central defender and is therefore not perceivable for the strikers, as he is positioned in his back. 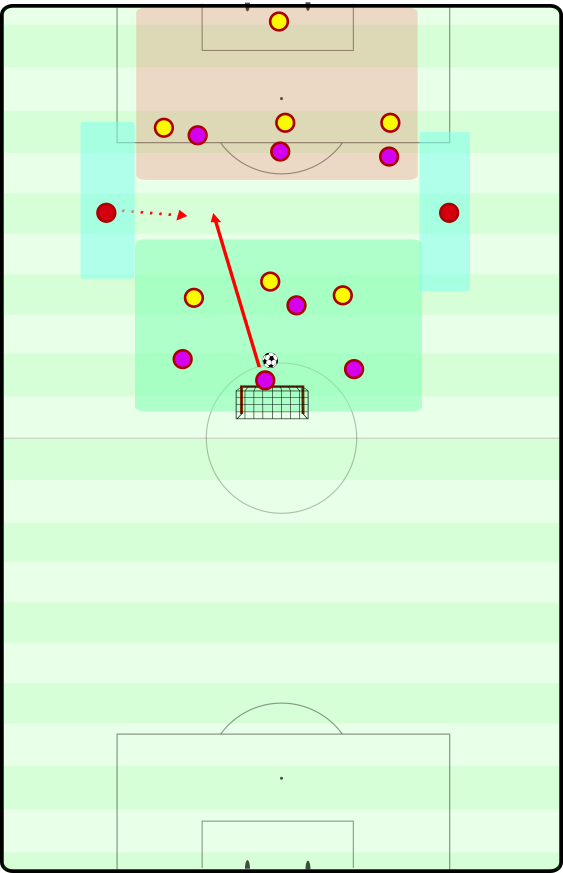 Continuation of play: If the ball is received in the blue zone, either a lay-off or a diagonal pass should be chosen.

Readiness: Especially because of his movements to open space, the central midfielder is one of the most important 3rd men. Thus he should always be ready to pass as a wall-pass option or to act as a continuation into depth. 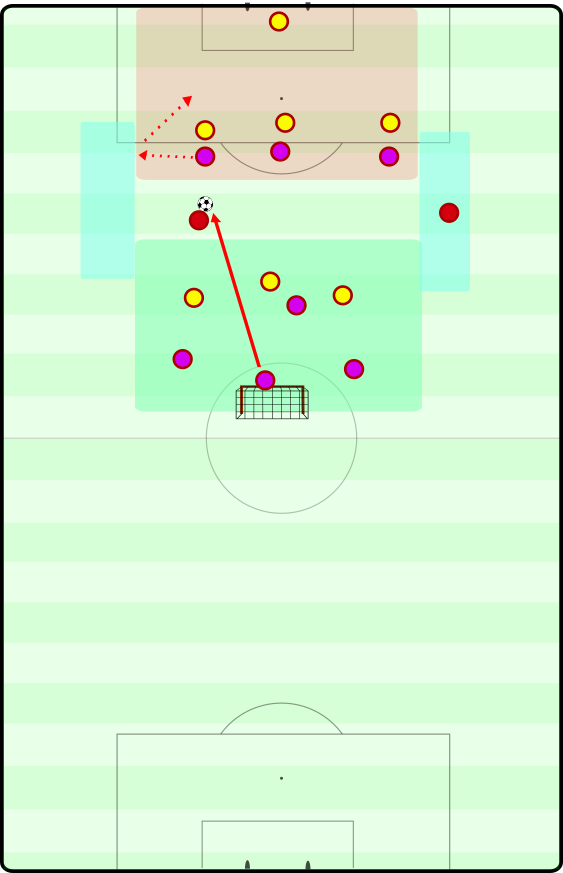 Timing and movement: This exercise makes it possible to work very well on timing for getting open for a pass, as well as movement feints for offensive players. For example, double movements can create an advantage over the defender. To know when to get open is to perceive when the teammate is ready to pass. This can be seen by eye contact or by lifting the head for example. 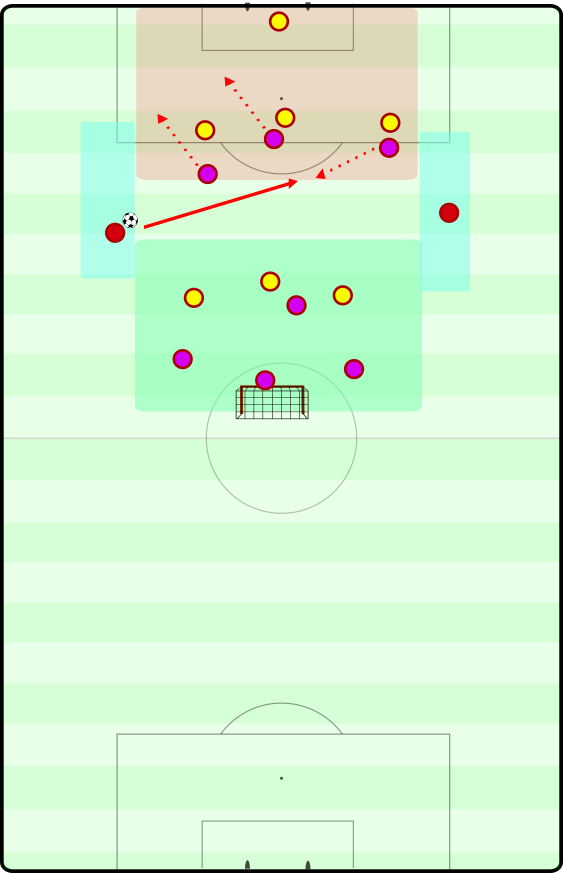 Follow-up movements are also important if, for example, the fullback receives the ball in the middle zone (creating space for the fullback – graphic 4) or in the outer zone (freeing up diagonal options – graphic 5).

The principles of the defensive game can of course also be worked on through this game. For example, behaviour patterns in pressing (use of covershadows, curved runs, backward pressing, etc.) can be demanded and coached, but also defending in the middle zone or “being close” in  rest-defense can be trained by this exercise.