This a small sided practice that I often use to introduce transition and counterattacking principles due to the possession changes, but depending on the press (or lack of) of the defending team, the practice can also be used to as a patient attempt to play through a low-block of two players.

The setup is simple, two goals each defended by a goalkeeper. Three teams divided evenly into the starting gates, two either side of each goal, and then two more gates exactly halfway in the middle of the pitch as illustrated below. For exercise sake, let’s say the blues are the starting attacking team, red’s starting defending team, and the whites are the joker/magic players.

In terms of distance, I love this practice because it is easily adaptable in terms of outcome and fitness periodisation. If I’m looking to encourage a quick needle move in a tight space, I will make the distance shorter and enforce a touch limit, whereas, I have used this in the “preparatory” stage of pre-season before, over a large distance, to create a different kind of dynamic in the counter attack, depending on the number of players available, (no less than 12) the rest period time is quite nice for repetitions. 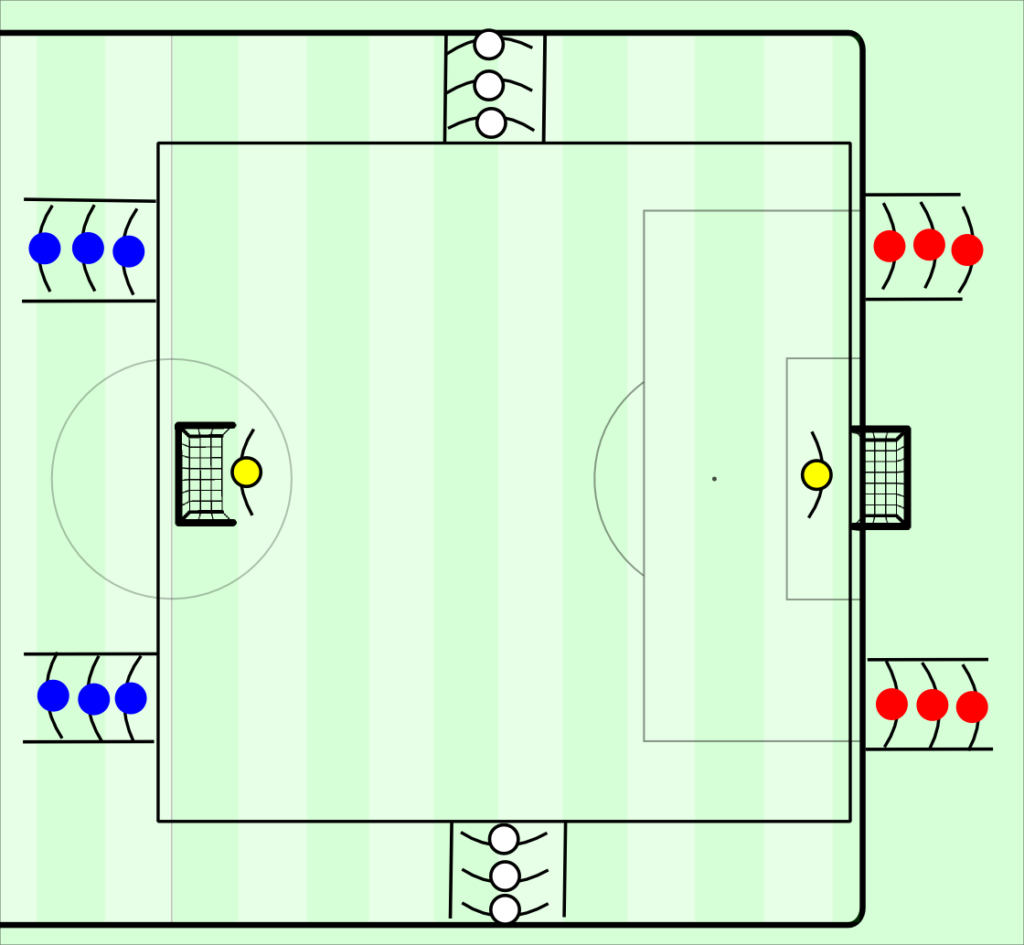 The practice becomes a straight 4v2, If the ball is lost to the defending team, they must go and score in the opposite goal and the joker players join with them to make it 4v2, with roles being reversed. After a goal is scored, or the ball leaves the field, the players must return to their start positions. I often play this with three teams, and each would get 8 minutes in the starting role of attacking, defender, joker and rotate between roles, with whoever scores the most goals overall throughout each phase being crowned the winner, to make the session extra competitive.

As soon as the first pass is played the defending team must decide whether to press the touch (depending on the game model & trigger, touch, distance, etc) or to sit in as a compact two and protect the centre slowing down the attack, forcing a pass into a wide joker player, that they can press and turn over possession.

Depending on the situation, I like to ask the defending players to come up with their own solutions in this practice, and then ask them why they took that decision in their defensive organisation. Often, I will play this without goalkeepers and with a first-time finish to encourage the defending two to press the ball carrier and the next pass, and although this often results in the press being bypassed due to the attacking overload, creates nice backwards pressing/recovering situations due to the first-time finish constraint.

The game creates a nice situation for the joker players, obviously when they first receive the ball they are always attacking a clear goal, with their orientation clearly defined. But with each change in ball-possession their role changes, and it is important that they are coached to try to be at the very least in line with the ball, or in-front of it when possession changes. Obviously, there is always a benefit to playing backwards to draw out the press, but in this practice at It starts 4v2 we try to encourage forward play to make use of the overload.

If the play does break down and say, possession changes, I will encourage the Joker players to play backwards to draw out the press into the centre, for the central players to bounce the ball diagonally back to the joker, who then can either dribble diagonally or play a diagonal pass through the poor pressing line.

Diagonal backwards passes to the Joker players may occur but the way the practice is designed it shouldn’t happen due to their high starting position. Obviously, the benefits of bouncing the ball into the central player are massive, but only when the overload cannot be exploited, and a more patient approach to scoring is needed. The tempo and rhythm is controlled by the coach, and again depends on what you’re looking for, whether a quick counterattack through a high press or a patient attempt to break down a central 2.

The changing of the joker’s goal orientation is very nice to coach their body shape, as the joker players always start on the touchline, it’s important for them to have an open body shape to play diagonally to the central player who runs into the box. It’s also imperative to encourage the cut-back, as this will usually come from one Joker, whereas the other should be encouraged to run diagonally towards the back post as the ball is cut back to meet the ball. A pattern that will often occur through the defending teams press is central player to Joker, who plays back into the centre, then back out for the Joker to cut the ball back. Diagonal movement is important for this pattern hence the need for open body shape.

When talking about the cutback with the players, it is important to mention each of the four players roles in the context of the cut-back. One player will always deliver the final pass, a second player has to take up the unselfish role of running beyond where the ball will arrive to pin the defenders and pull them from their positional slots, the third player then has to arrive into where the ball should be, with the final player being the ball-far joker arriving towards the back-post.

One combination I really like to use Is, as the ball is delivered, the first player to arrive runs to the near post, drags a defender with him to open space for the second player, who dummies for the arriving ball-far player to tap in. In the context of the opening 4v2 situation these roles may apply, but after a possession change you may find a joker player being the one who ends up running beyond the ball to pin the defender due to the complex nature of the game.

If the defending players decide to sit deep, then the dynamic of the game changes and the attacking team are more focused on pulling them out of their defensive slots. This can be through Up-Back-through or Out-In-Out third man patterns. A key idea to reinforce for the attacking team here is, a well-known pressing trigger amongst most teams is, “if the ball is played towards the touchline” if executed properly, the attacking team can play the ball towards the joker provoking one of the defending two to leave his zone, allowing a quick 1-2 to exploit the space he leaves behind.

Overall, I’ve had a lot of success with this session, I love how adaptable it is depending on what the coach wants to work towards, and how easy the framework is to adapt to each differing game model. Obviously with everything you must take the session and adapt it towards your own model and subjective view of the game, but any feedback or discussion would be greatly appreciated!