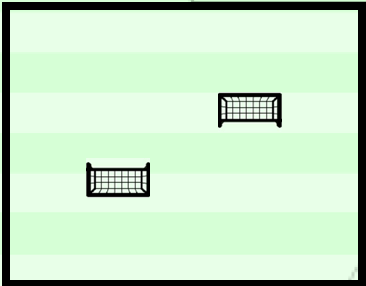 Why the reverse goals? Goals have the biggest influence on the behaviour of players. The position and the location of the goals in this activity creates a gravitation pull of attention which results in both teams becoming attracted to the central area. The proximity of the two goals puts an even greater emphasis on intention, every decision in this activity must have a purpose or you run the risk of immediate punishment for your errors.

The team in possession must solve the problem of displacing the defending team and can score on either of the two goals. Both goals are live and can be scored on at any point during the activity. Depending on the training objectives on the day, the team that has regained the ball can immediately transition to either of the two goals or be conditioned to secure x amount of passes prior to being allowed to score.

Alternative methods of scoring include; completing a number of passes set forth by the coach, progressing the ball through the central space between the two goals, or transferring the ball from a specific zone to another. This forces the players to be space artists in constant search for the best positioning and orientation on the field. Defending and attacking in this double edge sword demands heightened concentration and awareness at all times.

Due to the stop start nature of the activity I normally have the mini goals ready and progress into the reverse goal game only after a series of small positioning games or rondos. The introduction of the reverse goals immediately raises the level of competitiveness within the group. The reason I started using this activity was get players to think and act on purpose more often.

Taking a look at the design of the activity we can dissect a number of basic implicit aspects:

The following are a few examples of how to progress the activity from micro to macro scales across different age and skill levels while ensuring 4 key actions in possession are the focus of concentration: 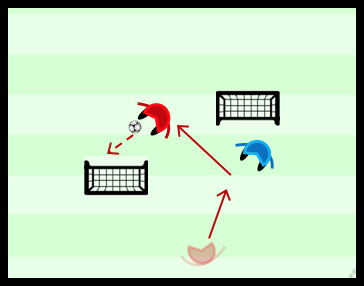 What is key at this age is protecting the ball and using deception of actions such as fakes, feints, changes of direction. Creative ways to lose your defender should be demonstrated by the coach for the players to observe (slow the opponent down and change direction or speed), then encourage them to create their own solutions. Instead of dropping cones and having players dribble, cut, and turn in an unopposed drill this activity exposes the player to game realistic demands and forces them to practice dribbling, shielding, and turning techniques with a purpose and function.

From as early as 4 years old we can begin to provoke intelligent behaviour from the children. “If goal x is blocked where should you go? And If the defender tracks you to the other goal what can you do to lose them? The players will begin to create their own solutions to unbalance and lose defenders while learning the importance of protecting the ball.

Another simple question to constantly ask over the top is “Where is the free net?” “Can you play in the future?”, “Can you drag the defender to one net and then finish on the other?” Implicitly teaching the players the ball is a tool that can be used to manipulate defenders. This will tease out and lay down a critical principle that will be heavily relied on in future years.

Possible Progressions: 1v1v1, 1v1+1, 2v2, or even playing multiple 1v1 duels at the same time in the same playing area to increase interference. Coach can also number players on the side, and upon hearing their number enter for their duel. Coach can even plant “landmines” (balls on top of cones) to further increase difficulty and give the players another obstacle to be aware of.  If the landmine is hit and the ball falls off the cone that player loses a point.

Condition: Attacking team can have 1 more player in a half than the defending team 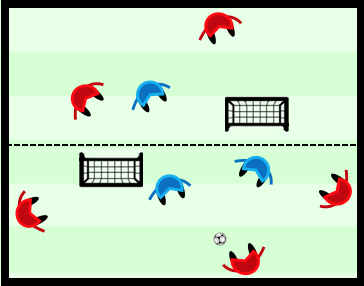 A key area of concentration at this age is to develop the habit of passing without interception. Every single pass should send a clear message to the direct teammate receiving the ball as well as the rest of the team. For example, a pass hit into space says something completely different than a pass to feet. We want to heighten the awareness of the players off the ball in relation to their teammates and their direct rival(s), we do this by asking them to create passing options.

The objective is to bring out the idea of gaining positional or dynamic superiority and respecting the space of teammates on the ball. Another important concept is to help the players understand why they should create supporting positions without approaching the ball. The Player should not prevent themself from being able to pass to free teammates through their actions (body posture, speed of action, facing the side line, etc.)

In this activity, a great question to provoke deeper thinking and create good discussions with the players is “Where is the most valuable space to live or arrive in”? “What cues tell us when we should come near the ball and which tell us to move away from it?”

Condition: Team in possession must have one player occupying each of the 4 zones 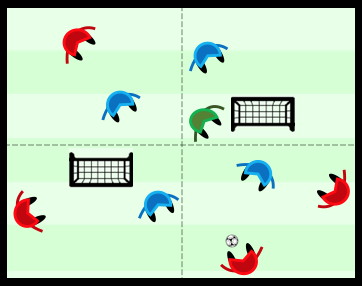 The underlying idea behind reducing oppositional cover is to create space between the opponents to be able to receive without interception or under immediate pressure. Using guidelines such as “Position as far as you can and as close as necessary” in possession will create decisional crises’ for the defending team. This will put defenders in difficult marking situations where they have to choose between prioritizing the ball or the player. Another method to reduce cover is for the players who cannot (or should not receive), act in order to assist teammates who are in better positions to receive. For example, avoid blocking a passing line to a teammate in a better position than you or use of opposite movements to free up space and other teammates.

The condition of having one player in each of the four zones forces the player to become aware of their own space in relation to their teammates and the opponents. From each respective zone the players must create room for each other and also recognize when is the right moment to provide support in a new zone. Most importantly, the players in each zone must learn to create space for themselves, here the coach can give pointers on pre-movements and various dismarking methods.

The idea is to attract the opponents and fixate their perception to free up a teammate or a key space for a teammate to arrive in. Movement should be as efficient as possible, in order for this to happen players must be aware of how the opposition is reacting to them, only then can interchanges or rotations serve a purpose. One way to facilitate a discussion with the players can be to recreate a common error during a rest break and ask “Show me a possible solution to create a free player in this moment” “How can your movement lock a defender and free up another teammate? “Show me how you would do that” “When is the moment for this to happen? How, Why?”

The addition of goals surrounding the exterior of the playing area can also be used to tease certain behaviours in transitions such as counterpressing and anticipating stepping forward upon losing possession. Using gates instead of mini goals is one way to ensure more flow in the activity. Experiment with various field shapes, dimensions, number of players, and conditions to squeeze your player’s decision making. Recently I’ve tried introducing vestibular constraints such as asking the player to blink rapidly during play or swapping between having one eye closed for short durations.

Adopting a playing area with diagonal edges also promotes certain behaviours while limiting others. For example, in the hexagon playing field players are implicitly forced to act diagonally after horizontal or vertical passes, the angled edges also limit the behaviour of cycling the ball around the exterior without intention. The condition of the angled edges speaks to the players for the coach at the same time squeezing the players to further deal with acting in the congested area.

Tension in this activity can be fairly high. Players will initially force play in attempt to score, combine that with the stop start nature of the activity and players will become hard on each other. Which is why the activity requires a blend of patience, explicit instruction, and provocative questioning on the part of the coach which may over time result in the emergence of more purposeful interactions on and off the ball in possession.

“In training the approach is to greatly vary the game situations and the ways of approaching them so that the players do not get bored, the tasks have the same goal but with 2-3 different rules of provocation to train the agitation of the senses” – Julian Nagelsmann