Today’s offering is about the idea of “overloading to isolate” and how this looks in practice. To start this piece I have to start with one of Guardiola’s more famous soundbites, “Move the opponent, not the ball. Invite the opponent to press. You have the ball on one side, to finish on the other.”

This is exactly the principle we will be talking about today, overloading a certain area of the pitch to then  quickly switch the ball to an area of the pitch that has less defenders positioned in it, isolate the far defender either 1v1, or using numerical superiority, then attack the goal.

It is clear here to make a distinction that we are not talking of “passing the ball for the sake of passing the ball”, more so the key element here is to move the opponent. The idea of the overload is that by asking questions of the opponent by overloading one area of the pitch, they should commit more players into this area, allowing the switch to be played to the “weaker” side.

The set up for this game is simple, a pitch split into thirds, with wide channels on the outside. Inside the middle third is divided into four sections. Both teams must have 1 CF in the opposing box and 1 CB in their defensive box.

The middle third contains four players from each team plus a neutral player. By having this set up of pitch allowed me as the coach to manipulate many different outcomes by changing the rules. Some of the rules I used are as follows.

The first rule was that each of the four players in the middle zones must stay within their own area, to aid them in thinking about their positional structure and distance from the ball, if the ball is played into the centre-forward who then plays the ball back inside to the middle third, a “free game” is initiated and players are allowed to move anywhere they chose.

After this happens a goal is worth 2 points. If the striker receives the ball and goes 1v1 with the centre back, and scores, then a goal is worth one point. We played the game like this at first familiarise the players with the distances to support the player on the ball, to overload the centre of the pitch without coming too close to the ball carrier. 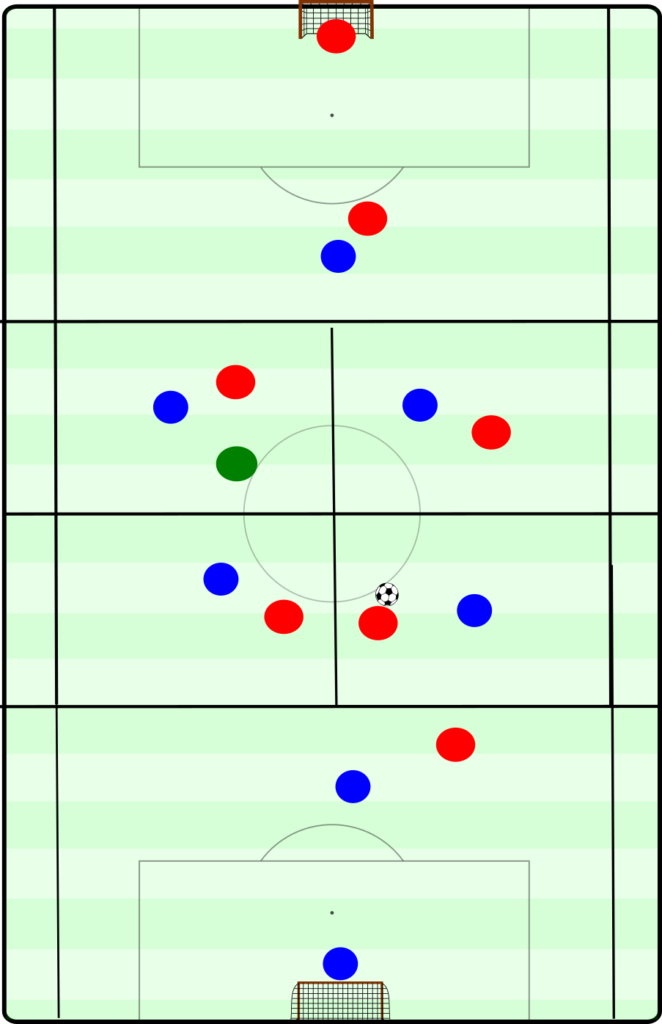 The second variation I played of this to incorporate the overload to isolate principle is as follows, the game starts at the goalkeeper with the ball, when in possession of the ball, the two midfielders closest to the opponents’ goal can play in the wide channel, and the defending team can only commit 3 players to a single square, meaning one must play on the halfway mark of the middle third.

At this point in the game, only the team in possession is allowed their players in the wide channels, but the other 6 players inside the middle third are free to move how they wish between the middle third. By enforcing these rules, the game has created an overload in the central area, also giving good support in depth with the CB and the CF and in width with both the ball near and ball far wingers. 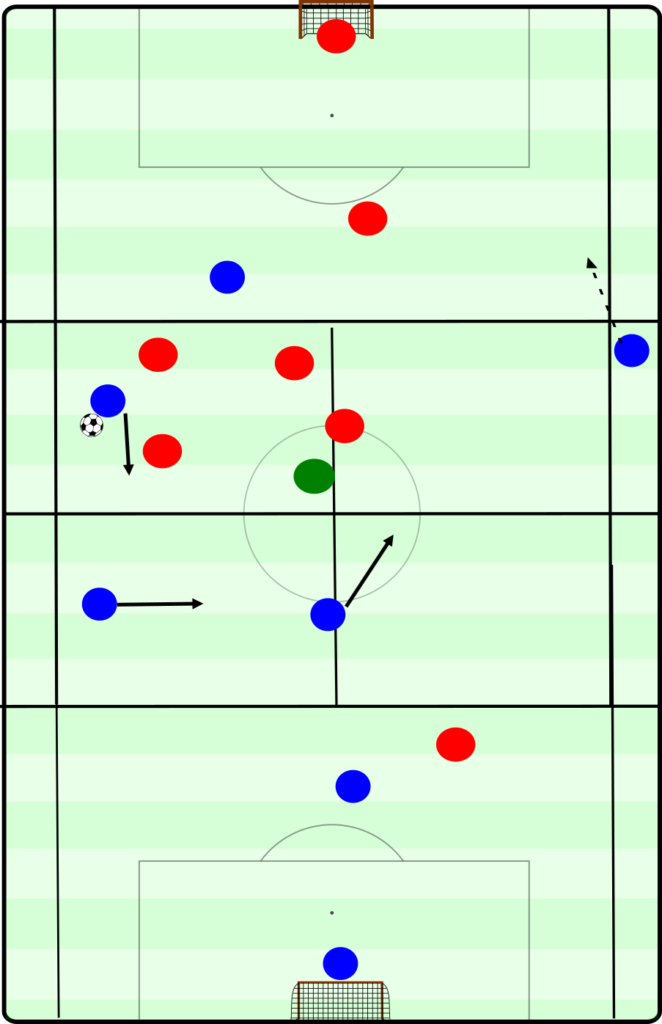 If the defending team, red in the example, win the ball back they have the option to either play directly into their centre forward to play 1v1 with the centre back or to move the ball into a wide area providing the ball far player has been smart enough to move into the channel.

Due to the constraint of having certain players in each square, if the ball is regained after a counterpress, the reds in this situation should have good numerical superiority over the blues to control possession in order to progress the ball to the winger to complete the overload to isolate for the 2 or 3 point goal. 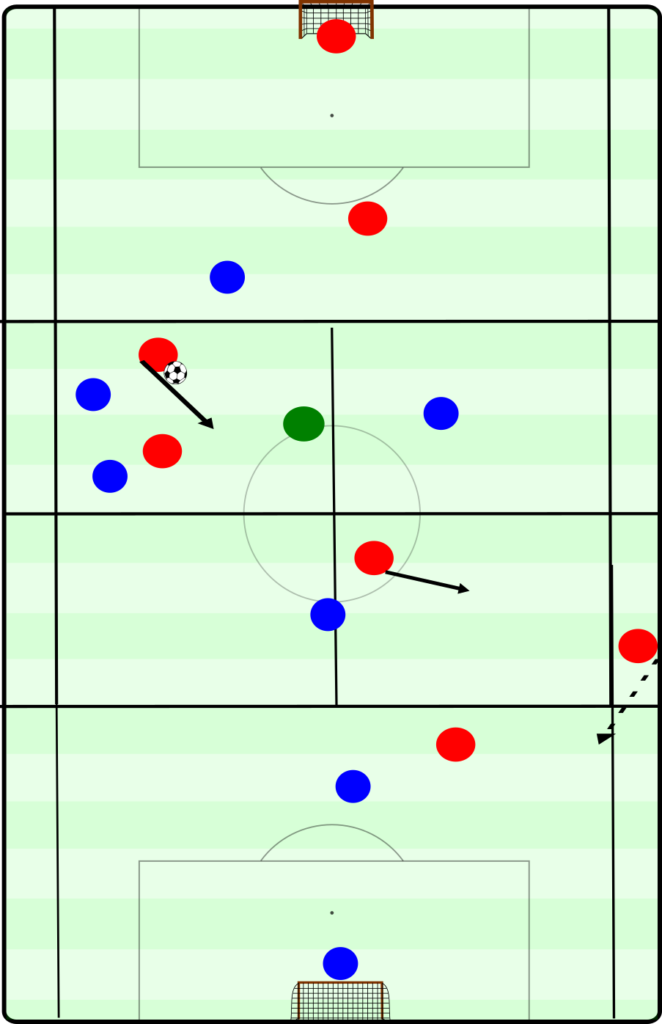 Overall, I like this practice for the many outcomes it can produce, whilst it should also be remembered that it is trying to create a very specific situation whilst still replicating the game fully.

The coach can also work on the teams positional play through this, in regards to distance and spacing when in controlled possession, but also movements after the ball has been regained, the idea of not moving to close to the ball carrier, (as close as needed, as far as possible), and how correct spacing in possession can lead to good rest defending when the ball possession has been turned over.

The practice needs to be managed by the coach because although it starts very structured, the “free-play” after the ball reaches the wide player can often become quite chaotic. Things that I would also implement are touch restrictions in the middle third to improve upon combination play, attacking ideas once the ball reaches the winger and restrictions are lifted, i.e, a dummy run from the striker to the near post to pull the defender across the goal, creating a cut-back situation for the player at the far post.

One final thing that I have also implemented is the importance of diagonality in the middle third to enhance the cleaner ball progression to the winger, whilst also working on the positioning and orientation of the middle players, and stressing the importance of diagonal passes. One way I have done this is by giving an extra point for each diagonal pass played before the switch pass to the winger.