Door 3: Playing in behind the oppent’s last line 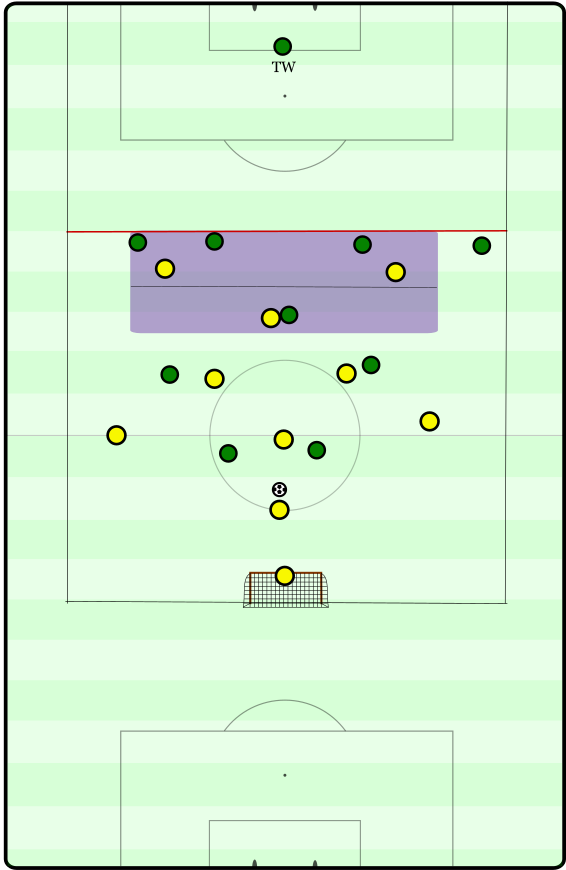 This 10v10 game is about getting behind your opponent’s last line. We want to do this by running into the depth, but changing certain rules can also help generating other ways of breaking through.

– Yellow tries to play behind the red line, this is only possible with a pass into depth. This red line is also the offside line. The green defenders may only pass behind the red line when a pass has been played behind it. With a bit of sensitivity, you can also allow the defenders to follow the depth runners. However, clear communication with the players as to how far they can go, is essential.

– Three offensive players are positioned in a purple zone, which is divided into two horizontal halves. As a rule in positioning, no two adjacent players may position themselves on the same horizontal line.

– If green wins the ball, it is a free game.

This exercise is (relatively) free, the players have only a few rules to follow. Here it is up to the coach to decide how much explicit coaching can be brought into focus. Implicit learning or teaching is of great importance for the authors of this blog, as well as for the guest authors of this Advent calendar, often (I suspect) preferring explicit coaching. Nevertheless, it has its own very important place in training. I myself have been confronted with problems in my coaching work that I have not only been able to solve implicitly. How I had to coach I didn’t know and wasn’t really taught. René Marić work about verbal communication helped me immensely here and is probably basis for my way how I coach exercises explicitly. Explicit coaching is also an excellent way to develop the team’s playing style in a very specific and detailed way. A detailed picture of the own playing style is essential here. Maybe there are people who have it stored in their head, but it helped me to write down principles and sub-principles and always take them as a guideline. Of course, they can (and should!) evolve, but this was a good starting point for me and made my coaching more efficient. 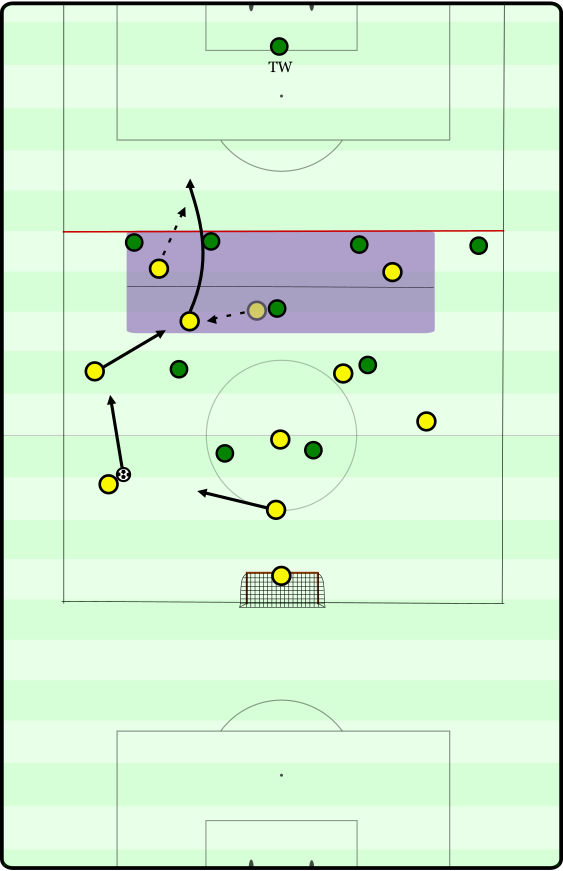 Timing is an often used coaching point, but it is rarely explained further what “right” timing is. “Timing needs to get better” doesn’t really help for the player to evaluate what good timing is. In runs into deep, which are one of the main topics in this form of play, it is therefore important to establish when the player has to start off in order to be in a certain place at a certain point in time. What information does he need in order to be able to judge when he should start sprinting? Eye contact with the player on the ball is an often heard point that can be helpful. This eye contact can also be sought with teammates who will eventually get the ball and are in a position to play the ball in depth. In this case, the pass giver and receiver must think ahead. The player running into depth can also pay attention to the “quality” of the positioning/ball control of his teammates. Is he under pressure? Where is his body position directed? Has he seen me? Can he play “disguised passes” ? All these questions lead to the players judging better when a run into the depth is actually effective and when not. The deliberate opening of spaces by running can also be coached here, but is not an explicit goal of the exercise, although it can be focused, using the third man. In addition to the strikers, the eights and the fullbacks can also go into depth (or other players, depending on the coach’s wishes/positioning in possession of the ball).

For the player who passes, there are other points which he has to consider. First and foremost body position, orientation and also eye contact. The constant look to the furthest positioned player helps to recognize early when players are running into the depth. An open body position is an additional help, but standing closed on purpose and deceiving opponents is of course also an option.

The positioning of the strikers in the violet zone is primarily implied by the rule that no two players may be in a horizontal line. For this working well, the strikers should always look around and keep an eye on the free spaces and their teammates. In addition, it can be mentioned that diagonal passages to each other are not blocked. Generally, this game offers the opportunity to improve communication between offensive players.