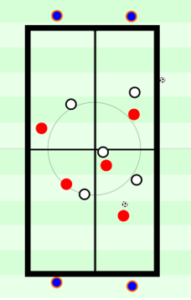 Rules:
– Red plays with blue on holding the ball. With 10 passes or 2 deep shifts they win one point.
– If White wins the ball, the most distant Blue Player is played to score a point (both center lines must be overplayed). White then remains in possession of the ball and the tasks swap automatically.

Variations:
– only 1 outer player per side, who must always adapt to the location of the ball win and reposition accordingly.
– 1 more free man on the horizontal line to support the counter from a good position. (Where should he position himself, how should he stand to the ball, where does he turn up?)
– With coaching emphasis on counter-pressing: Point for ball recapture in the same quarter, possibly reduce field size to reward counter-pressing more often.

Coaching
This exercise is based on the principle of “countering in the X”, according to which after a ball has been won, the side furthest from the ball should always be played in the direction of the opponent’s goal as quickly as possible. This results from the principle “We always want to get to the opponent’s goal as fast as possible” and the fact that there is probably more room for it on the far side. In addition, a deep pass behind the defence can be taken from the far side, more easily goal-aligned.
Within this exercise, however, the immediate situation after the ball has been won should first be dealt with. In which direction do I look during the ball win? “Tief spielt, wer tief sehen” is an approach for talking about turning up, taking off or dissolving. Do I have high opponent pressure? Then it should be decided whether the possession of the ball must first be secured or whether it can be used to attack. If I want to play attacking, it must be perceived how directly or via detours it can be countered. If I can play the diagonal deep ball directly or if I have to take alternatives (moving and vertical play, finding back passes and new gaps, …). The field size is narrow but long, so that the pass to the front offers the greatest pressure resolution and thus the fast vertical/diagonal game is rewarded. The exercise can be used to introduce the above principles and implement them into the minds of the players. In the further course of training, the principle can then be trained more concretely and, above all, with goal finishes according to one’s own game idea and basic orientation. Here the own defense behavior before the ball win is to be considered and the fast transfer of the opposing remainder defense over the ball far side to compile is.