The goalkeeper has a variety of tactical tasks, and may (or should) be an extended arm of the coach. Anticipation is essential, the goalkeeper should know and assess the performance-level of his teammates and be able to prepare for different scenarios. Accordingly, the goalkeeper can choose his position to suit the follow-up action or verbally coach the player before the action and prepare him for certain circumstances!

Interesting for me, in goalkeeping, was always the aspect of the interaction between goalkeeper and defender, because the former also has a lot of tasks to do which have to do with anticipation. In case of long balls or passes into deep by the opponent, the goalkeeper should coach his teammates at the right time. If the ball is played low, the defender should block the opponent’s player during the run, in order to enable the goalkeeper either to pick up balls  in the penalty area or to head away in front of the penalty area in order to avoid second balls in front of his own box. Of course commands have to be established, I use “BLOCK!”, and my defenders know what to do. This measure reduces the stress in your first third and makes opponents, who play many long balls, increasingly desperate.

The interaction between goalkeeper and defender is also more important when blocking shots than is often assumed. In the following video, Wojciech Szczesny and Giorgio Chiellini explain how the former reads the positioning of his team-mate and derives his own from it.

Great clip of Chiellini & Szczesny discussing the collaboration between defender & goalkeeper during urgent shot-defending. Those familiar with the sport of handball, will have some knowledge on how the defender can effectively cover one post to help GK…pic.twitter.com/yCGGznc8yE

In a positional game, the goalkeeper acts as a wall-player for the possession team, and should do so at the border of the penalty area. The goal of the offensive team is to keep the ball. If the ball is lost, the goalkeeper must quickly return to his goal and help shape the defensive action, i.e. individually consider his own positioning, and coach the defenders. The positioning of the goalkeeper is very realistic to the real game in this exercise. In possession of the ball he acts as a connecting player, while after losing the ball he has to transition quickly and find his correct position in the goal in order to carry out the collective as well as the individual defensive action appropriately. 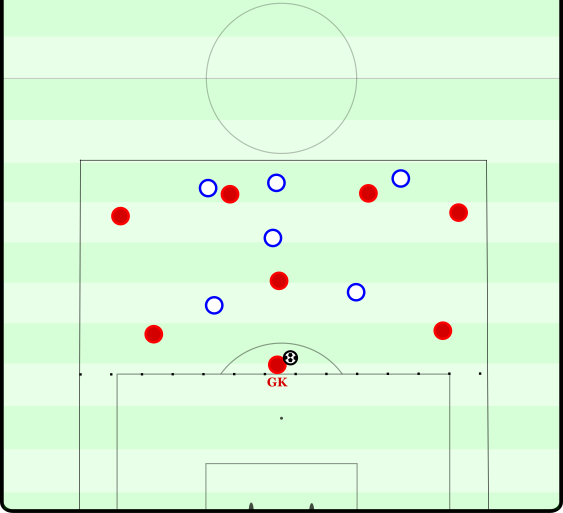 The goalkeeper again acts as a wall player. The playing field is divided vertically into 3 zones, whereby the touch numbers differ depending on the zone. In this game  it is only about the behaviour in possession of the ball. The goalkeeper should be forced to switch sides under pressure if he is in one of the lateral zones. Because even if the goalkeeper is being played to on the side, he should not play into the pressing of the opponent, but help to outplay the pressing. In most cases this is possible with the help of a switch of play. The number of touches is reduced in the lateral zone, since the goalkeeper’s technical/tactical requirement profile is particularly important against opponents who press high. These aspects, as well as the perception through correctly orientating themselves, must be trained. In the middle zone “la pausa” can be used tactically to tie opponents. 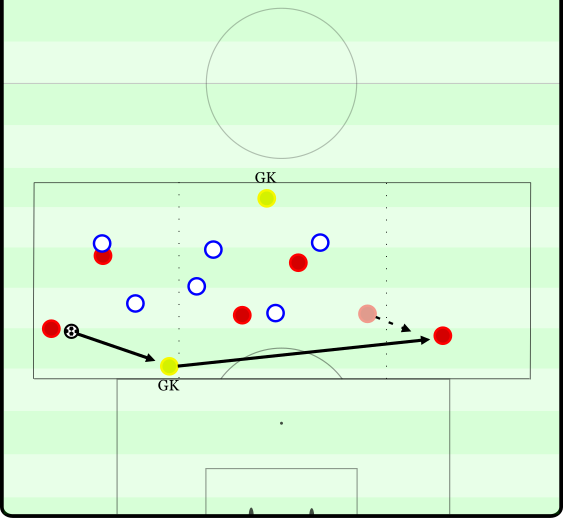