Door 11: Playing between the lines

Today’s Calendar piece is all about focusing on the idea of playing between the opponent’s lines. The practice is an 8v8+3 practice that needs two goalkeepers (or a shooting restriction, i.e, one touch finish if you are goalkeeper-less), pitch size should be about 60×40.

“En el fútbol el ‘timing’ es la base de todo” (In football, timing is the basis of everything): Saul Niguez

Of course, having a player play between the line, then become marked again will usually break another line, creating a different passing lane. If we talk of a 4-3-3 v a 4-2-3-1 and the 4-3-3’s striker playing just behind the opponent’s double 6 and in front of the opponent’s centre back paring, simply by standing in the space he may cause huge confusion.

Obviously as seen in the past 5-10 years defensive structures are becoming better and better, and far more compact, limiting the space players are able to find between lines. To combat this players need to be excellent in tight spaces, have a good understand of timing in relation to both space and their teammate, and then be able to execute the decision within compact space.

Of course, the most famous example of how effective this can be is Messi’s incredible performance in the Bernabeau on May 2nd 2009, but everyone already knows that. 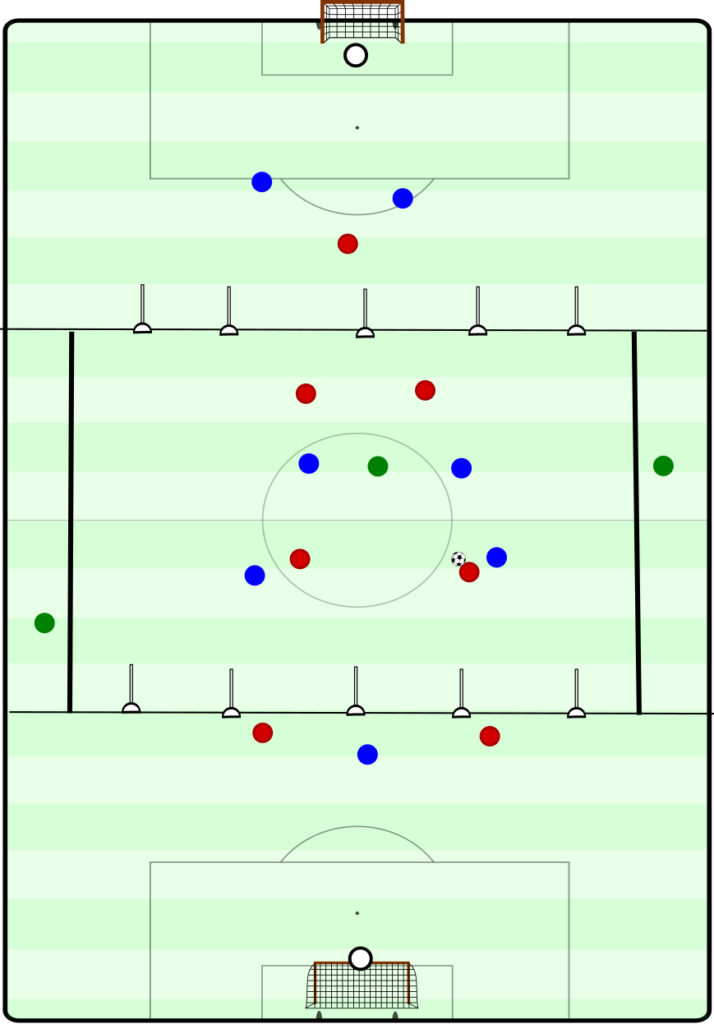 The ball starts at the feet of the goalkeeper with a 3v1 overload against the opposing striker, the two centre backs must then progress the ball into the middle third, into either the jokers acting as wide players, or the players from their team inside the middle preferably with the ball being played on the floor.

The ball could be played from the CBs into the full-backs using a chipped pass, but the coach has to decide for themselves whether or not this is realistic, or if the ball to the striker effectively skipping out the middle third is on, due to the crowed nature of the middle area, plus the mannequins this would seem unlikely, but no coach would want to rule out a laser pass of this much genius, so I often play this game with the rule that the ball should be played on the floor, but the rest is up to the interpretation of the players.

Scoring is as follows, the moment the ball reaches the strikers feet, a free game begins and every player is free to move where they wish until a goal is scored, or the ball goes out for goal kick (Corners and Throw-ins don’t change the game rules). Baring the wide joker players who must stay inside in the middle third, either as passers for the attacking team or to maintain possession and structure to work the ball back into the middle third.

Or additionally they can be used by the defending team as target players for when they gain possession, to orient themselves towards the goal and assist the striker who is probably being marked 2v1. In the picture below (picture #3) I have him being marked 1v1, because the red’s defend with cojones.

As seen in picture 2, if this scene arises and the striker manages to drop off the defender and arrive anywhere onto the marked line and receive the ball, providing the red team don’t lose it in the next action, any goal they score from this point onwards is worth three points. First to ten points wins.

The idea of the game is to work on the dropping movement of the striker to receive in between the opponent’s lines, this can happen normally for the one goal as we are counting the line of mannequins as a line of opponents.

Once a goal is scored, the ball begins again at the goalkeeper’s feet, and everyone returns to their zones for the next round. One interesting way of starting this practice that I have thought of, was to have the ball with one of the full-backs directly playing into the striker, who then has to get a score for 1 point or bounce the ball back into the middle third to try for the three point rule.

I like this progression of the practice’s starting point, as it allows the striker to start the game off focusing on a potential individual outcome, (1v2 dribbling, type of finish) if the centre backs win the ball, the game starts in the same 3v1 overload situation it did before, and if the striker scores or misses his shot, then ball restarts with the goalkeeper anyway. 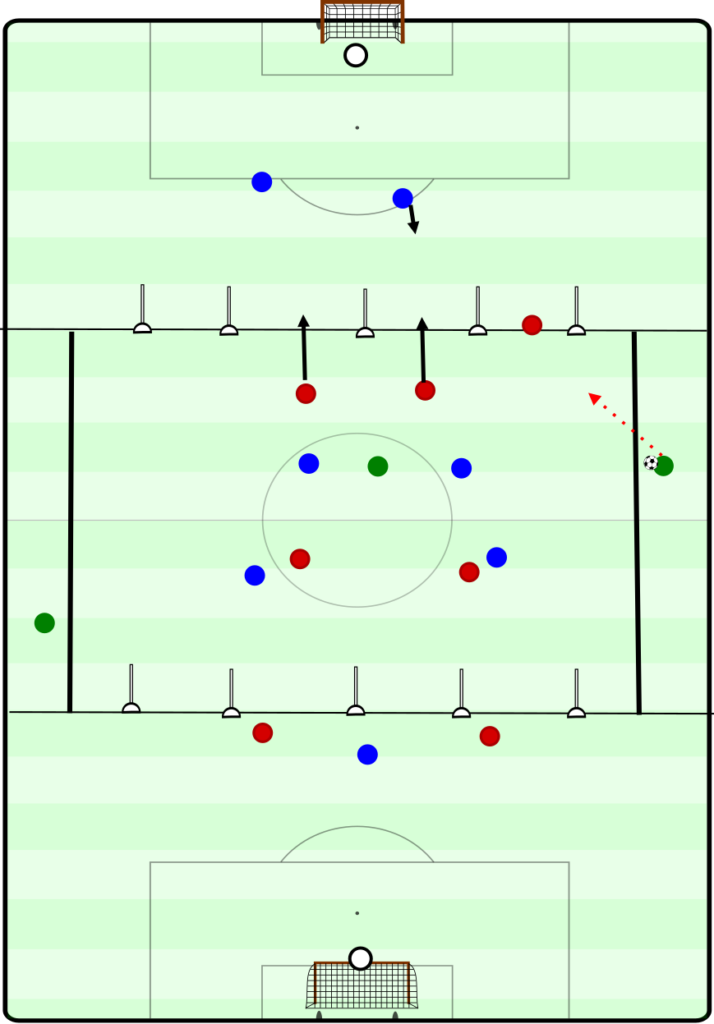 To outline a few things for the coach to consider explicitly coaching when delivering this practice:

In the first phase of the practice, the joker players are urged to stay high (relative to the game) and wait for the ball to get to them.

In the starting situation the striker has to be clever how he pressures the ball regarding his cover shadow blocking the pass to the nearest joker, if his teammates are covering the players in the middle third.

Centre backs to dribble into available space, drawing out the striker for a quick switch into the other centre back to successfully progress the ball into the middle third. 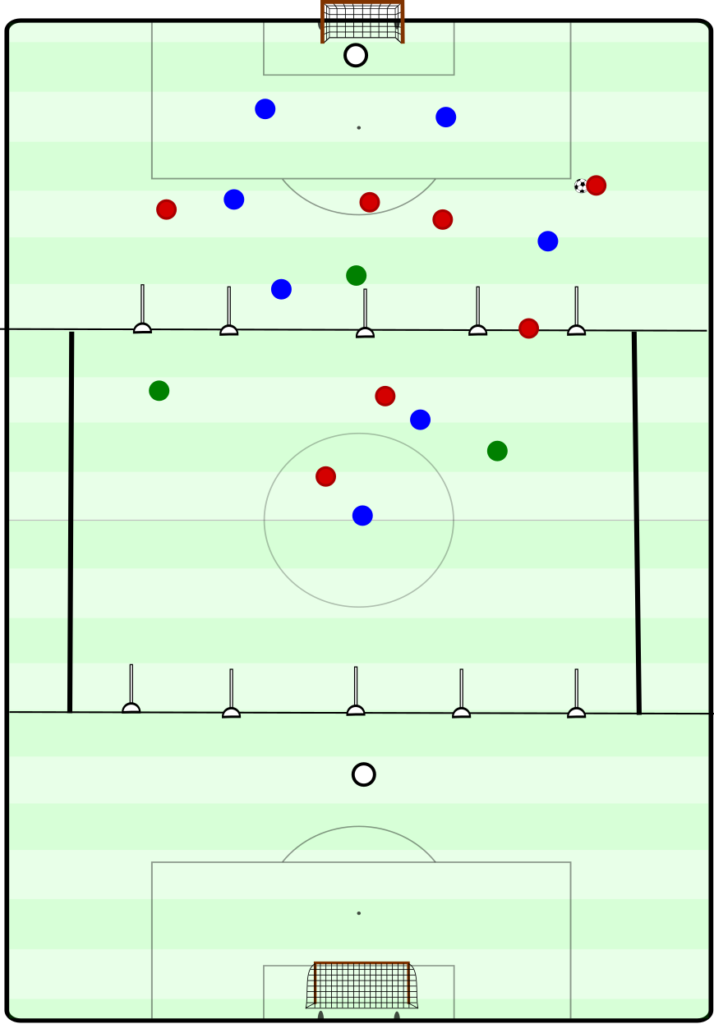 If the ball is played into the joker players, can they play a chipped pass, or a slide pass for someone to run onto to break a defensive line.

How do the joker players act in the middle third when the ball arrives in the final third, do they play as false-fullbacks for the possession team or do they get as wide as they can within the confines of the middle third?

Most importantly, when the striker begins his dropping movement, are the other attacking players planning for the game to become free, can they time their movement to arrive into the final third on the end of a third-man move? At this point we are always stressing to the players to consider their next action and how it affects the game.

Finally, when the striker drops what impact does this have on the defending team, do the centre backs go with him or do they prepare for the space to be attacked?

The purpose of this session is to train the idea of playing between the lines, the dropping movement of the striker and the timing and orientation issues that come with that decision. Further things that can be coached within this practice are positional play within the middle third, understanding of dynamics between the central players, how can players offer structure within possession when being kept in certain areas?

One of the things I enjoy most about coaching this session is developing the dynamic occupation of the 9 space, as the striker drops and turns, getting players to think about who has to move into the space as runs beyond can be so effective in breaking down an opposition.

The key aspect of dynamic occupation is of course training the timing of the movement, encouraging players to think about the next action, but also different techniques to progress the ball, for example in this session alone, the striker can receive, turn himself and play the ball into players running from depth, or bounce the ball into a player facing the game for them to play forward.

The game is also very good for teaching orientation to goal, with both a striker to always play to, and jokers after you win possession, as with all my practices, when I deliver this a big thing I stress is positioning in possession, and this game helps with this.

Finally, I have also played with a rule that inside the middle third if you take more than two touches, the next person you give the ball to must only play one touch. As with everything, when coaching touch restrictions, context is key, I explain why this rule is in place, to encourage quick ball possession, and vertical movement, to progress the ball, but also to encourage players to think of the next action, which is so vital in this game, as without teammates thinking ahead the attacking striker will often be completed isolated.

“There’s only one moment in which you can arrive in time.  If you’re not there, you’re either too early or too late.” 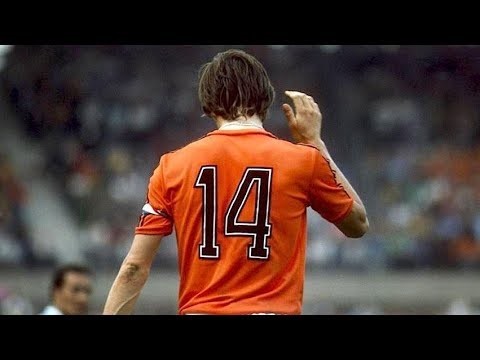