Jürgen Klopp once famously stated that counterpressing is “the best playmaker”. With this saying, he places the focus on a certain aspect of the now well-known tactical tool that can be implemented in different ways and varies based on the context you use it in.

The first thing that one thinks of when hearing the word “counterpressing” is probably the attempt to win the ball back as quickly as possible in a collective manner. Although it implies a rather aggressive playing style compared to “dropping back”, you mainly focus on a reactive aspect when solely using this kind of definition, i.e. the first action after the ball is lost. Like that, other factors might be disregarded or implemented purely implicitly.

Just like possession is not a “philosophy”, counterpressing isn’t one as well. It’s rather a tool that can be used in certain ways. The playmaking aspect of it becomes visible when you allow the opponents to start the offensive transition after they win the ball which eventually opens up spaces for you. This is when the ball has to be won back in order for it to be exploited. You can see how counterpressing is closely related to other phases of the game instead of clearly being defined as a phase by itself.

Accordingly, it’s actually possible not only to react too slow in counterpressing but also to win the ball back “too soon”, when the opponent didn’t even start the transition, yet, and still remains in a pressing structure.

Another function would be “counterpressing to secure possession”. You try to win the ball back in a way that allows you to find a free player (on the far side). Afterwards, you can just continue with your possession game from a better position or as if it never ended in the first place.

Both aspects – playmaking and securing possession – are used by all teams that apply some kind of a counterpressing. But there are certain ways to focus more on one of both and to provoke situations which make your desired use of counterpressing more likely.

One option would be to overload certain areas of the field in a rather extreme way. You can either do this before the ball is played there or while this happens. In order not to allow for a simple breakthrough, the opponent is forced to close down the same space. Loose and lost balls can be regained quickly. The overload leads to an underload somewhere else which can be used dynamically afterwards.

Another way of doing it would be to play from a rather balanced positional structure and to apply pressure next to the ball after losing it. If you already win it in this action, it’s pretty likely that some kind of space will be open. Otherwise you let the opponent advance slightly while guarding available passing options. This allows for a pass to be intercepted. Alternatively, you can also find good moments to double team the player in possession of the ball.

What should become clear from this: If you execute your counterpressing properly in any variation, it’s not so much about physical attributes but about collective tactical elements and behaviors that have to be applied in relation to each other in the right moment. Good physique can definitely help – especially to make up for small errors.

The ultimate positional game for transitions

No matter which kind of counterpressing shall be applied, it’s of highest importance that your players develop the “instinct” to transition quickly. This is ideally related to your own possession game already.

At the beginning of our exercise, there’s quite a typical positional game in three zones – two bigger fields and one short lane in between them. In each of the bigger fields, there’s a 3 versus 2 in favor of the possession team. The middle is guarded by three players of the defending team. Adding to that, there are three roaming players of the possession team. They can create a 4 versus 2 in both fields while at least one of them always has to stay in the middle lane.

Next to this main playing area, we build two additional side zones. Each of them contains two mini goals at the end. Also, one player of the defending team starts in each of these additional zones. The extra players are allowed to move up and down freely but can’t leave their area. They only become active at a later stage of the game. Their main function is to be available for offensive transitions. Overall, we play in a 9 versus 9 with different roles.

The possession team tries to play from one end of the main playing area to the other one. There’s no number of passes required before being allowed to do that. The only thing that matters is for the ball travel from end player to end player without the defending team controlling it at any time in between. Only then, the possession team will get one point.

If the defending team wins the ball, it tries to connect to one of the players in the additional side areas. If this is successful, their team attacks the two mini nets on the same side. The team previously in possession of the ball can counterpress freely. If they win the ball before it reaches the player in the additional area, we go back to the initial game and they try to connect the other side of the field, once again. The game might have to re-start with a new ball at this point.

If the pass to the player in the additional area is successful, you still try to win the ball back. But now your aim is to attack the two goals on the far side afterwards. Each goal scored like this, counts for one point as well.

Eventually, the exercise becomes a free 9 versus 9 tube game that is played until a goal is scored or until the ball goes out of bounds.

This is a highly complex game form that already implicitly covers a lot of the points I made earlier. Even small mistakes in counterpressing will be rigidly punished. Due to that, your team should already have some conception of counterpressing and should be able to play rather basic positional games without bigger problems before trying this kind of exercise.

The coaching in this drill starts where the game itself starts: in possession. At first, you have to make sure that there‘s some kind of a secure and calm ball circulation from which the players constantly look deep. Otherwise, they will not recognize the right moments when they can actually change the field. The ball has to be received with an open body position facing forward.

If the pressure by the defending team is too high, one of the roaming players has to drop back. In a 4 versus 2, the possession game should be much more stable as a diamond structure will almost naturally be created. You can use this moment to work on positional changes as well. For example, one of the lateral players in the 3 versus 2 can move into the central position, occupying the top of the diamond, while one roaming player drops back from the middle lane to take his spot.

Next to supporting directly, the function of the three roaming players can be to attract opponents in the center of the field. It’s also allowed to use them for lay-offs. Like that, you can effectively open passing lanes. At the same time, the roaming players can also position themselves closer to the extra players when their team is still in possession of the ball. It would allow for immediate access, once the ball is lost.

This depends on reading the game situation properly. The more likely a loss of possession is, the closer they should move to those extra players. The same goes for the lateral players in the 3 versus 2. Anticipating and thinking instead of just reacting and being surprised.

If the ball is actually lost, you have to block the passes towards the players in the additional zones as quickly at possible. At the same time, the center also has to be closed in order not to allow for third man actions or other quick combinations to happen.

If the ball reaches one of the extra players after all, at least one player has to pressure him right away. You have to guide him away from the goals while other players get a chance to move slightly behind the ball into a position which allows them to cover actions properly. If you win the ball while this situation develops, the central space has possibly opened up or at least there’s a chance to play a direct pass to one of the team mates who is still positioned higher up the field.

Extending the idea to a bigger game form 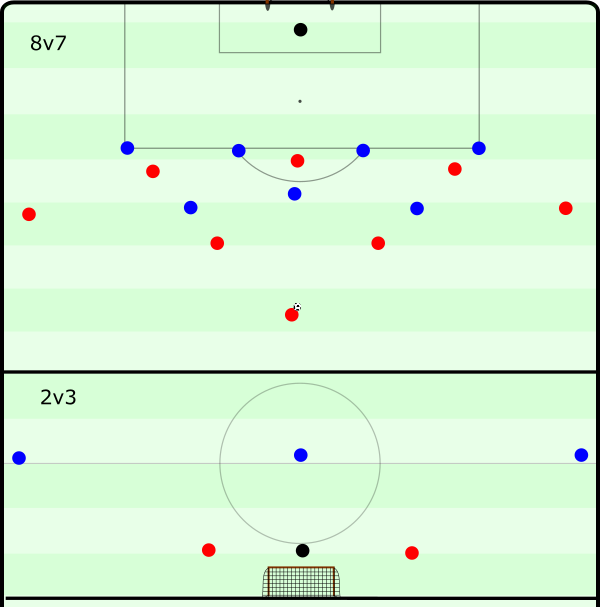 After playing this game, I would add another format that is really simple. You will ideally need two full teams for playing it but can also just use smaller numbers based on availability. The game starts with an 8 versus 7 in favor of the possession team. They play in (a part of) the opponent’s half. Their aim is to score a goal which will be rewarded with one point.

If the defending team wins the ball, they can immediately play forward to three of their players who are positioned higher up the field specifically for counter attacks. Two defenders can only step out on them, once a pass is actually played. A successful finish also will get the team playing on the counter one point. The 3 versus 2 is only played for a short time as all previously involved players can join in.

As a result, we will also play in a free 11 versus 11 at the end of this game. Once again, you continue until a goal is scored or the ball goes out of bounds, unless this takes too long and you want to go back to the initial situation earlier.

This game form works based on clear intentions by both teams: The possession team has to counterpress quickly in order to prevent their opponent from playing an immediate pass forward as they don’t want a 3 versus 2 against them to happen. The defending team, on the other hand, will naturally want to get into this situation. Their players will want to move forward quickly, also to support their three strikers as much as possible.

From this, spaces will be created that the counterpressing can actually make use of like a playmaker would do.