As far as I am concerned, the following training game is used in different variations by many coaches. With my U17s I regularly play in a setup that emphasizes the build-up play of our center backs as well as the subsequent lay-offs.

The main idea of how to get a point is relatively simple: It’s enough to play (on the ground!) from one side of the field to the other one without the opponent winning the ball. This rule is the base for many variations of the end zone game. 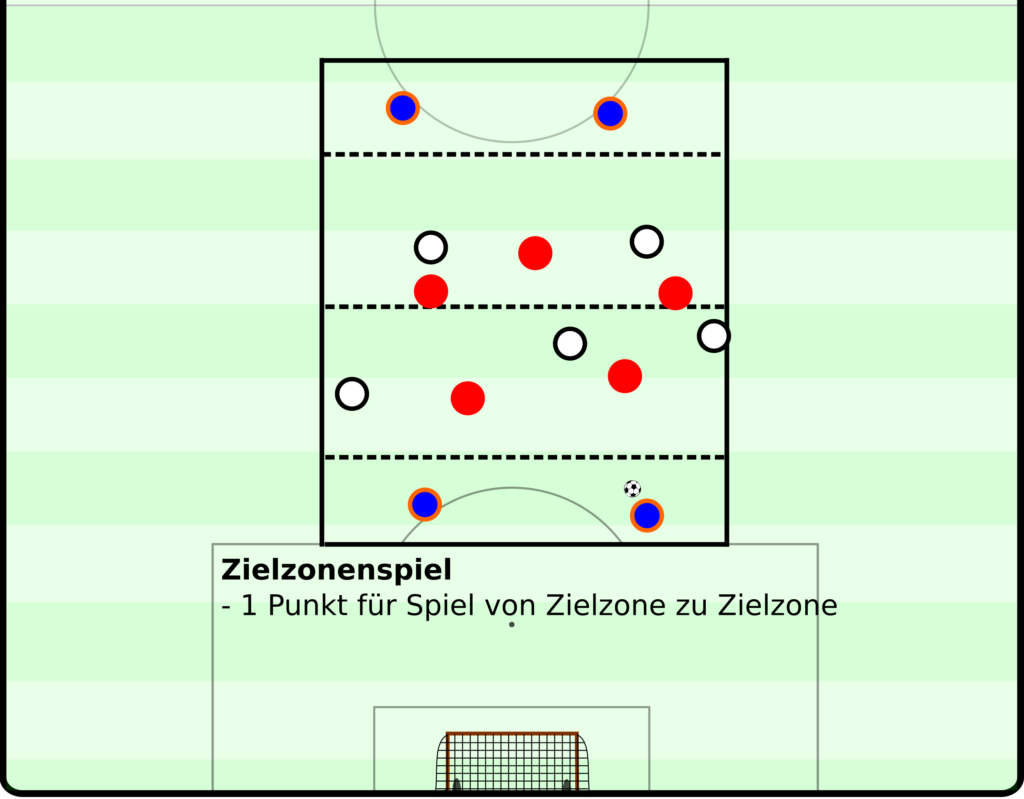 In the version I use, the neutral players are not positioned outside of the field like oftentimes but inside of it, within two end zones. The players of both teams can move freely. This means they can also enter the end zones for receiving passes or for attacking the ball carrier. Because of that the neutrals are not solely used for lay-offs but even more so as main build-up players.

Within this framework, I use my center backs as neutrals. Consequently, the whole training game can be viewed as a simplified version of playing from the back (one end zone) to the strikers (other end zone).

Based on the focus of the training session, you can modify the design even further. Oftentimes, I used big field sizes in relation to the number of players (dimensions like in the graphic or even bigger) to create a more game realistic environment for build-up play.

This is especially important to me, because I ask the players (first and foremost the center backs) to play the furthest possible ground pass in the build-up. In a rather small-scaled version the tempo of the game increases and the neutrals become more focussed on playing quick wall passes instead of replicating an actual build-up situation.

To reward the actions that I want to see, I often gave an additional point for successful passes from a neutral over the halfway line. A direct pass from one end zone to the other (key word: laser pass) would count for two points. With these modifications our center backs that were rather focused on playing within their immediate surrounding area would be guided to look and play beyond this.

Oftentimes I didn’t allow the neutrals to leave the end zones to focus on the passing game. But if you want to work on the dribbling skills of your center backs, it makes sense to even reward entering the middle zone. Every time they do so with the ball at their feet and initiate a play to the other end zone, it would count as an extra point.

To emphasize the use of lay-offs, I introduced the rule that every pass by a center back must be followed by a lay-off. This didn’t only force the receiver to play a wall pass, but also his team mates needed to adjust their position accordingly in order to receive the ball properly in the follow-up action.

Due to this, the speed of play within the middle zone was further increased. At the same time, the rule made the center backs more accountable for their passes. Only a good first progressive pass would guarantee for a clean progression.

Example for individualization within the training game

Based on the following variation, I will give an example how an individual tactical problem of our center back can be worked on specifically within an adjusted setup of the same training game.

Like all our players in this position, our left center back is right footed. This doesn’t have negative implications in most situations. But a problem came up during the last game. He’s very good at dribbling into space and beats the first line of the opponent’s pressing easily with that. But he dribbled rather straight and couldn’t make use of all available follow-up actions, because the technical execution with the right foot was not possible. 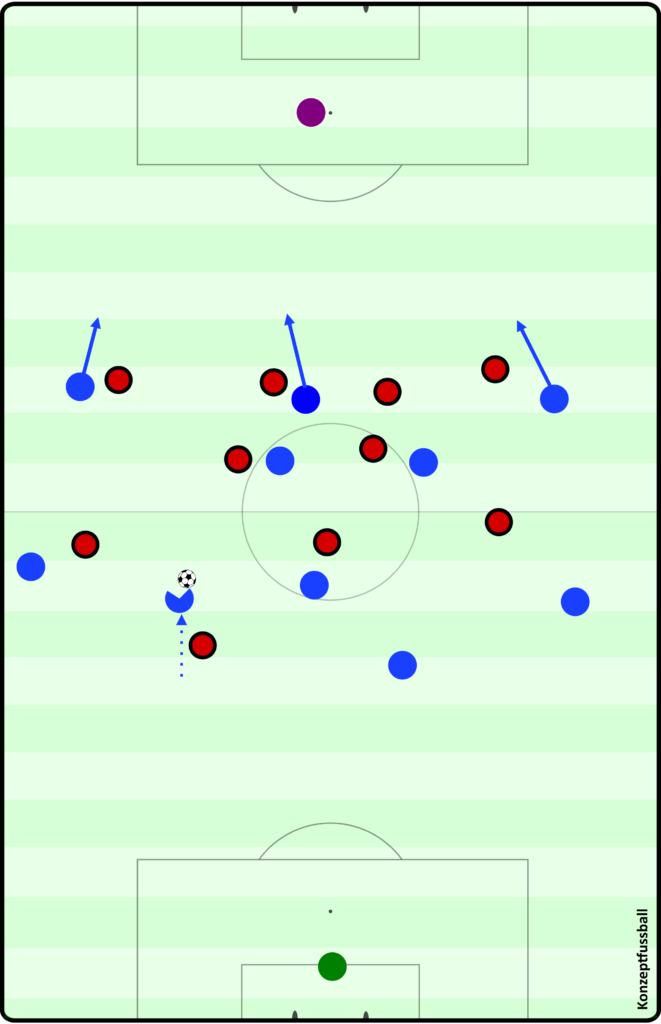 For example, a chip ball or a switch over the opponent’s defenders was not possible, even though his team mates positioned themselves well and made the required runs.

This resulted in intercepted passes and promising counter-attacks for the opponent, because the team was spread out and didn’t have a good starting position for counterpressing. A better solution would have been to dribble a bit more diagonally to have a body position from which a diagonal chip ball/pass is possible. 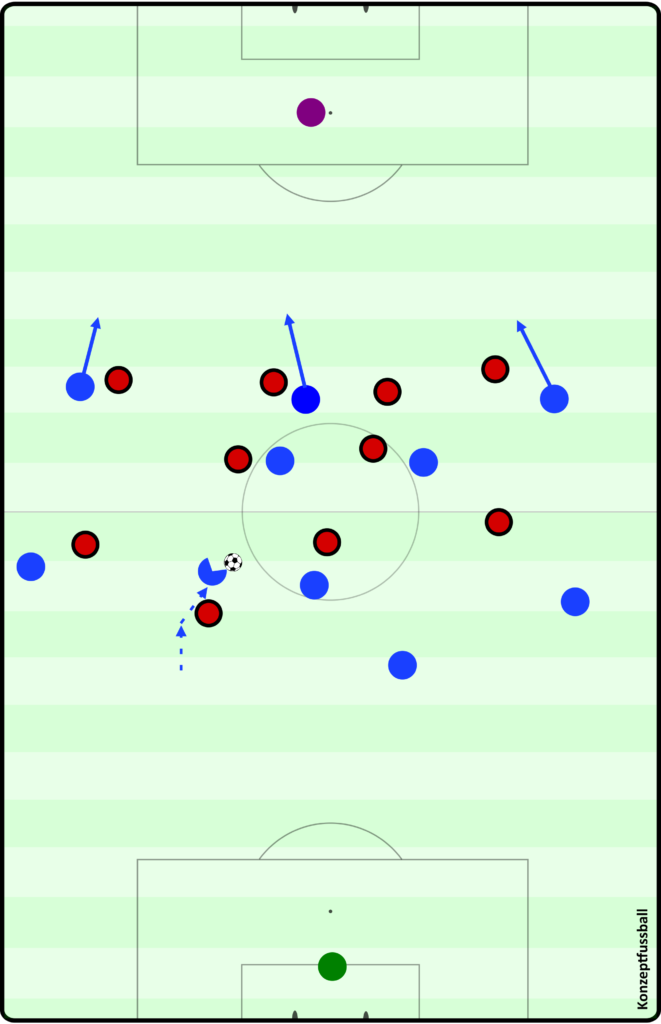 To train the necessary dribbling and to simulate a long ball afterwards, two medium sized goals (5 meters wide) were added specifically for our left center back. After dribbling inside the middle zone, he was allowed to score in either one. This was rewarded with an extra point, if done successfully. 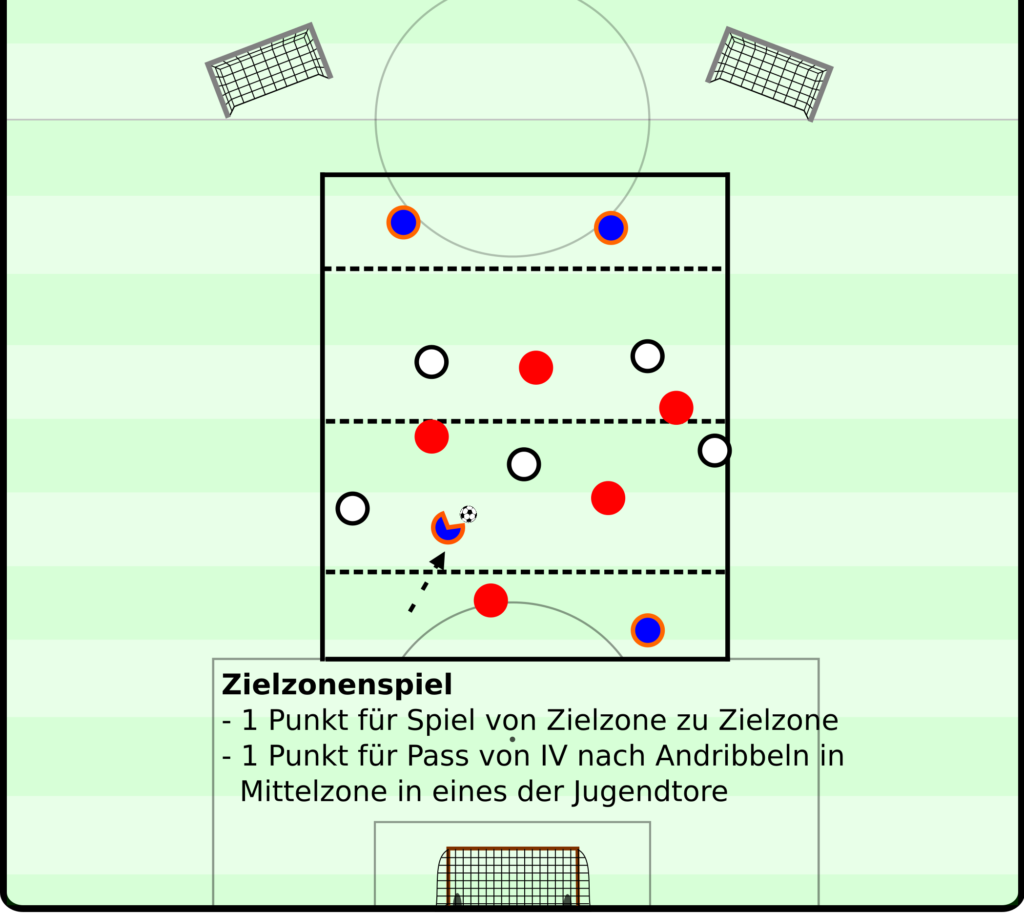 This is just one example of many possible ways to adjust the basic concept of the end zone game. It illustrates the big wealth of variants that this particular idea offers. That’s why I use it as an integral part of my training within different sessions and for different topics.