Last year’s advent calendar had a special contribution by feyre9251, which was about the 5v3 positional game. This exercise inspired me a lot and I decided to use it regularly with my U13. Because I liked the overall construction of the exercise, but I wanted to adopt it with my U11, as well as in the warm-up for the U13, I decided to turn the complexity a little bit. Thus, I adapted the exercise. 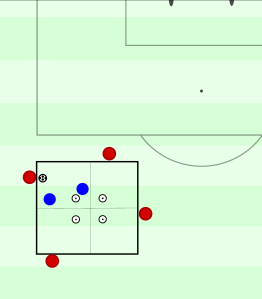 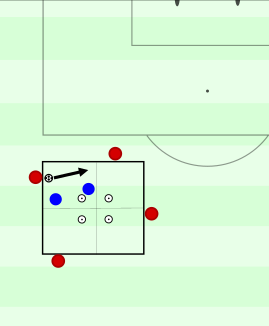 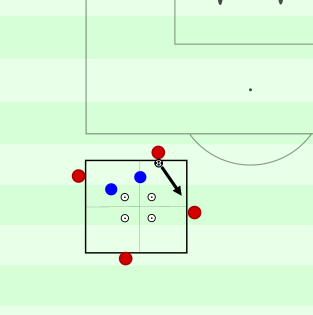 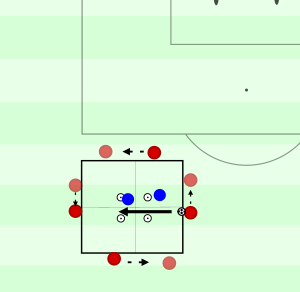 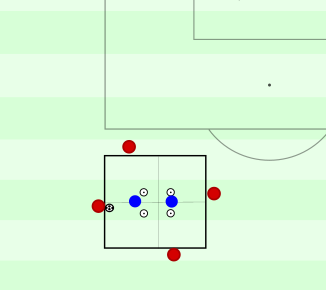 Rules and their consequences

There is only one player per zone allowed. Nevertheless, there should be constant, small adaptations to positioning happening. Players are allowed to go into another one’s zone to ask for the ball, if they see a good chance for that. The teammate therefore has to react on this movement and move out of the zone. This is how constant positional adaptations happen. Of course, this rule has a strong influence on the overall structure, it enforces diagonality and helps keeping clean and relatively uniform distances to each other.

The behavior of the players is strongly influences by the rule, as “coming too close” to the ball carrier would be an illegal move. Thus, players get used to fitting distances to each other and understand, that they do not have to come closer to the ball carrier to be open for a pass. The rule also builds awareness for connections. The players realize that every movement has an influence on the overall structure, therefore the own positioning has to be constantly adapted to balance out movements of the teammates.

Constant, but especially targeted orientation to teammates (and passing gates) happens on its own, as it is necessary to be able to follow the zone rule. As Moritz Kossmann mentioned in his article, orientation is often coached, but rarely players get tips on where to look. Instead, they just get told to “look around” or “scan the field”.

I rarely used touch limits, as it was important to me, that the players decided on their own when more or less touches were adequate. And also, that every touch on the ball has an effect on the opponent and that one can manipulate the opponent intentionally. My colleague Eduard Schmidt suggested a simple 6v2 rondo, where three touches were mandatory, which had an interesting effect on learning how to manipulate an opponent. Sometimes I used a two-touch limit for the 4v2 zonal rondo. I did this especially in the beginning of the season to improve overall speed of passing and its rhythm.

If the defenders win the ball, they try to dribble out of the box. When this happens, movement restrictions are gone and the players can move freely to win it back. Most of the times, the “dribbling-out-rule” enforces counterpressing on its own, even though sometimes the coach has to coach it explicitly.

The attacking team can score in two ways:

1. Through passing through the passing gates, that are positioned in the middle of the box. The attacking team becomes conditioned to pre-orienting themselves towards the middle and to position themselves accordingly to receive passes through the gates. An open body position, looking to the middle and to the teammates before receiving, as well as positioning yourself in the gap as a potential pass recipient, are very helpful and important to successfully gain a point.

2. Through playing eight passes without interception. This rule conditions the defenders to press the ball and not only wait for mistakes of the attacking team. The attacking team also has an incentive to create quick passing as well as patience, if there is no opening to the passing gate.

In reference to Juego de Posición I try to build awareness for distances and connections in between the players. The players should try to always be connected to each other, without coming too close and to lose the overview of the field. “As far away as possible, as close as needed”. The zonal rule enforces this behavior. “Mind the zones” is a sentence I like to use, to remind the players to look for their teammates and their own positioning, and therefore obeying the rules.

Because there are several orientation points, the teammates and the passing gates, I explicitly coach “look before receiving”, sometimes with specific hint to the passing gate.

Collective counterpressing is also something I mention, if it does not happen on its own. A lot of times, the opponent trying to dribble out of the box is (for kids) enough incentive to try to regain the ball. If this does not happen, mentioning it a few times helps. Explaining that it is easier to win the ball back if everybody helps is the main point here, as well as anticipating ball losses, which is better than just reacting, helps with timing in counterpressing.

For the defenders, covering each other is important. If the use of the cover shadow is not optimal and one does not cover one’s teammate, split passes through the passing gates are easy to play. Aggressive attacking and cutting passing lanes strategically to diminish numerical inferiority is also something I coached in this rondo.

Nevertheless, this exercise is already very helpful without explicit Coaching and enforces specific behaviors on its own. Explicit coaching is only a supplementation, the implicit nature of this exercise made me use it a lot with my U11.