Players started in the gym and with some warm-up-activities without the ball.

After that the players started to warm-up with the ball. One group did a passing pattern on tight space and a few variations of it (nothing spectacular). The other group just did some running and dribbling around with the ball. After 5 minutes, the groups changed.

The warm-up continued with a game of 8vs3 with one or two touches. The assistant coach said that the aim is to play one-touch but also two touches are okay. During the game the coach would always shout the name of one player and then this player had to sprint towards a pole (so it was often a 7vs3 and at times 8vs2). Nagelsmann didn’t coach at all during the warm-up. 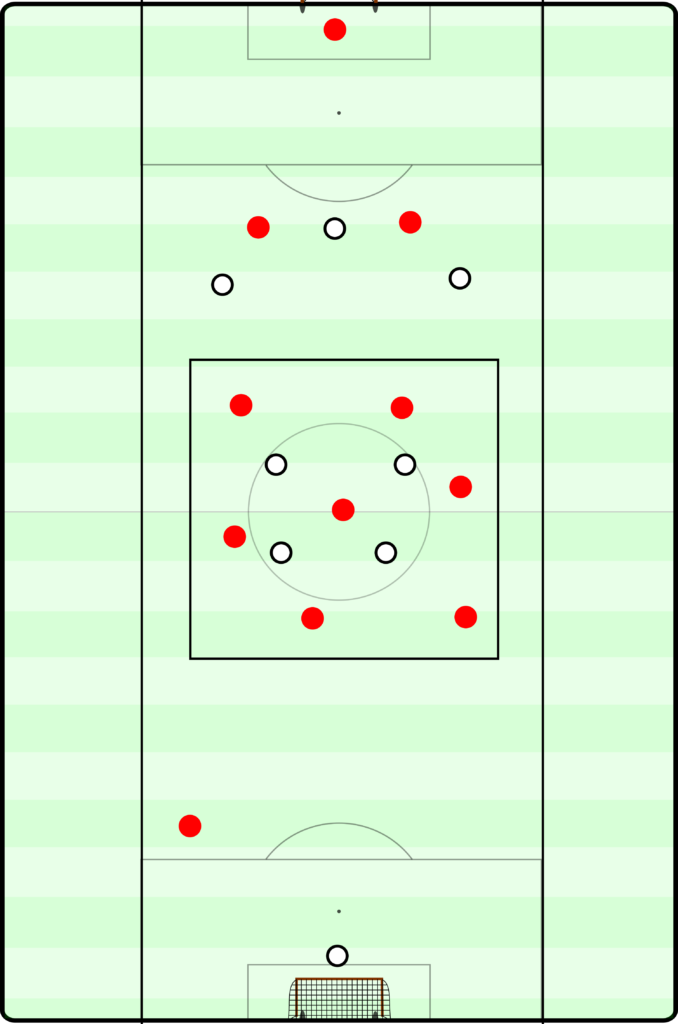 The game started with a 7vs4 in the middle of the field. The aim of the 7 players was to keep the ball and play 6 passes, then they would be allowed to attack the goal without any defenders intervening. The aim of the 4 players was to win the ball and play it into the 3vs2 situation, but some players from the middle field were allowed to track back. Later Nagelsmann changed it from 7vs4 into 3vs2 to 6vs4 into 3vs3. Unfortunately I didn’t acoustically understand his coaching well and I could only hear that he was coaching many different things like the behavior of the 4 defending players or some decision-making in the rondo. 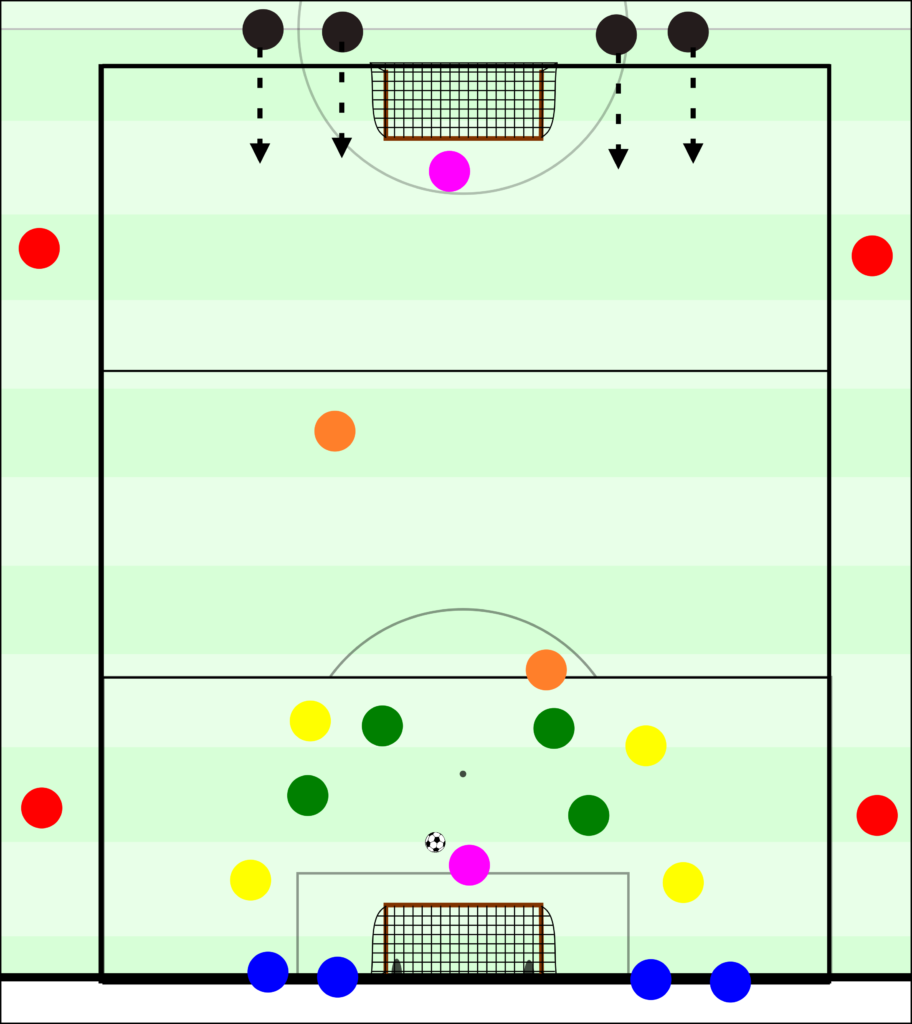 The game was played on a field divided into 3 zones. It started in one zone with one team trying to play out while another team was pressing them. When the team managed to play into the second third (and quickly progressed to the next third as there weren’t any defenders in the middle) the team from behind the goal would enter the field and try to defend and block shots. Meanwhile the team that couldn’t win the ball in high pressing left the field. 4 teams were always playing while one team had to do the wallplayers. There were two joker in the middle that mostly played one-touch-lay-offs in the middle third. The spaces were tight, but because of the quite huge overload (4vs4+goalkeeper+2wallplayers+2joker) the teams managed to play out well and so there were really a lot of shots in this game, though many of them were blocked by the defenders that entered from behind the goal.

The aim was two score two goals in a row, this would mean them scoring first after build up from pressure and then winning the ball in the attacking third while the next team was trying to play out and scoring again. For scoring two goals in a row a team got 3 points, team with the most points was the winner of the tournament.

The session came to an end after overall 75 Minutes.

The team was split into 3 groups of 7 players. One group played a 5vs2 rondo (4 outside, 1 inside). The next group was working on coordination with a ladder. Third group was doing small sprints through poles and shooting one two little goals. The coach shouted colors to tell them their way how to sprint through the poles and on which goal to shoot. Later he changed it to showing up cones in different colors.

Like in the morning there was again following a rondo. Instead of 8vs3, this time they played 5+1vs2+1. 5vs2 Rondo in a small field, after a certain amount of passes the middle player had to switch to the other end and they would play 6vs3 on a slightly bigger field. 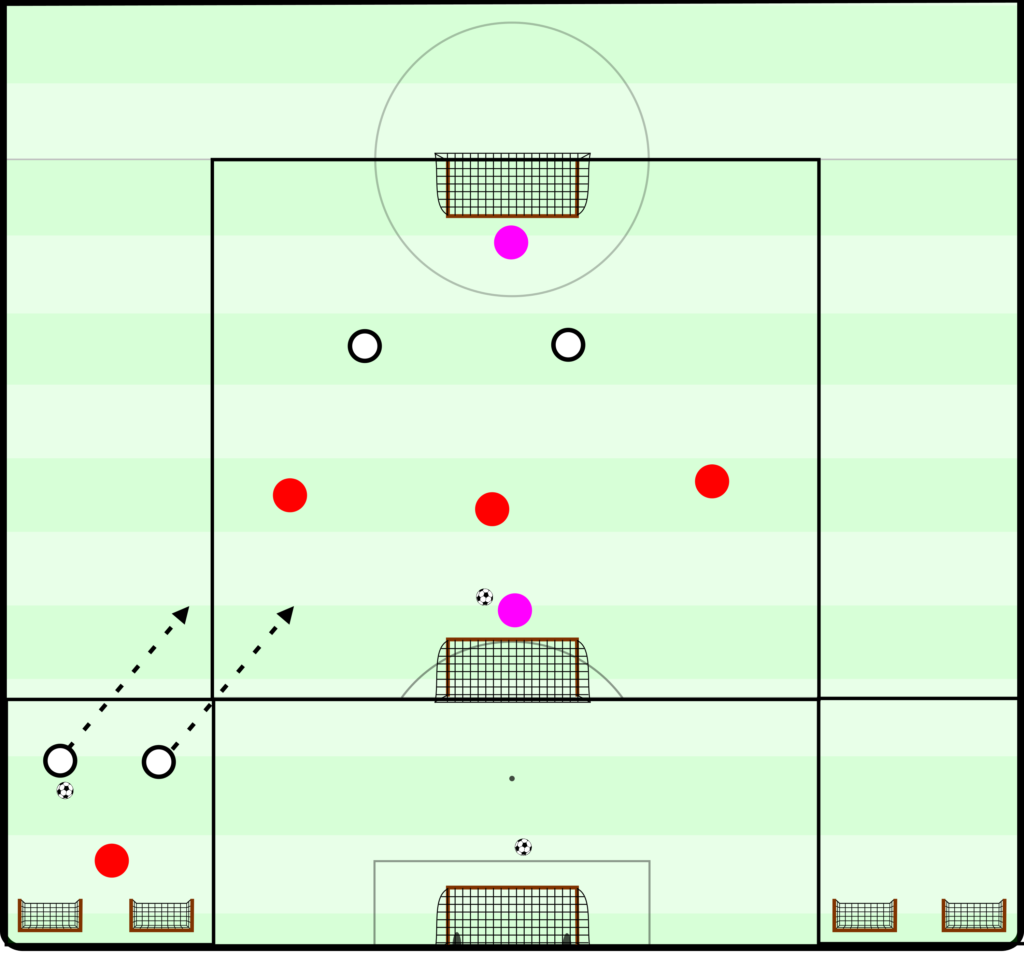 5 groups of 4 players were created and again I was impressed that they have bibs in so many different colors. What a great club. The drill started with a 2vs1 on two small goals. When the 2vs1 was finished a 3vs2 would immediately start in the big field. The two attackers from the 2vs1 had to quickly sprint back to help the other two defenders. If the attacking team didn’t score immediately, one counter of the other team was allowed, then the game would stop and the teams would change positions. Nagelsmann intensively coached intensity, shouting wildly around and forcing players to quickly get into positions. 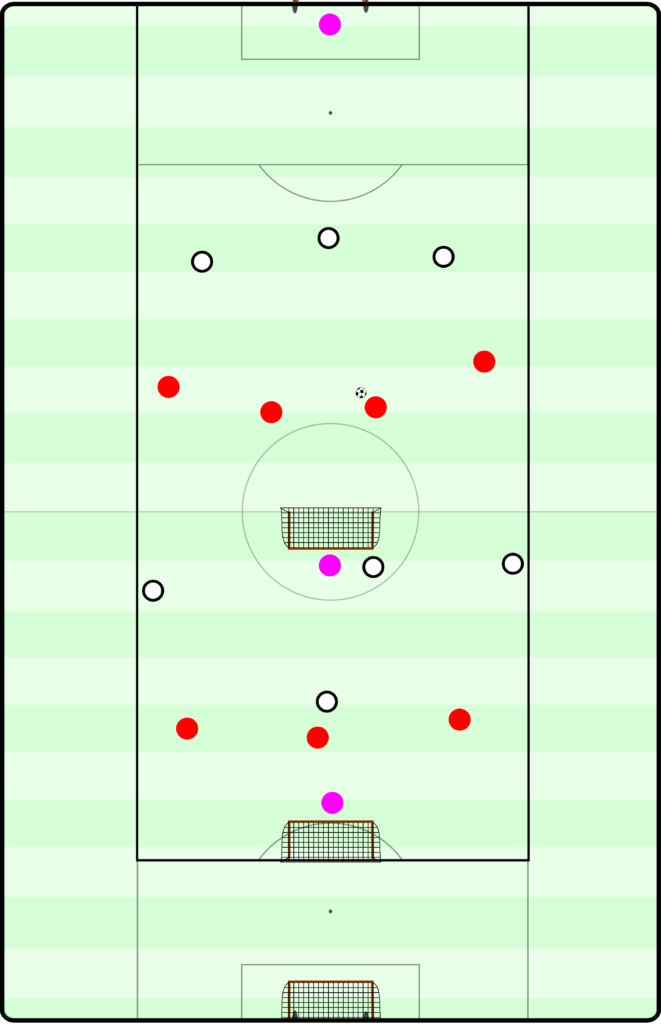 The game started with a 4vs3 attack. The 4 attackers had 45 seconds time to score a goal. After finishing (or after 45 seconds) the goalkeeper played a long ball towards one of the two wingers into the 4vs3 on the other half of the field (if the ball wasn’t accurate enough, the next goalkeeper would bring a ball into the game). The players from the first 4vs3 had to track back to make it 7vs7. The 7vs7 went on for 3 minutes until the game started again with a 4vs3-situation. The 7vs7 was very impressive; there was an awesome intensity and decent combinations on very small space. The attacking structure was mostly a 3-3-1 or 3-1-3.

Other Stuff Nagelsmann did:

As I was alone and therefore only did a day-trip I was not able to see more than two sessions. Fortunately I have met an Ex-Coach from the Austrian Bundesliga who is now working for his National Federation. He had good notes on the previous sessions and was able to explain me many things. 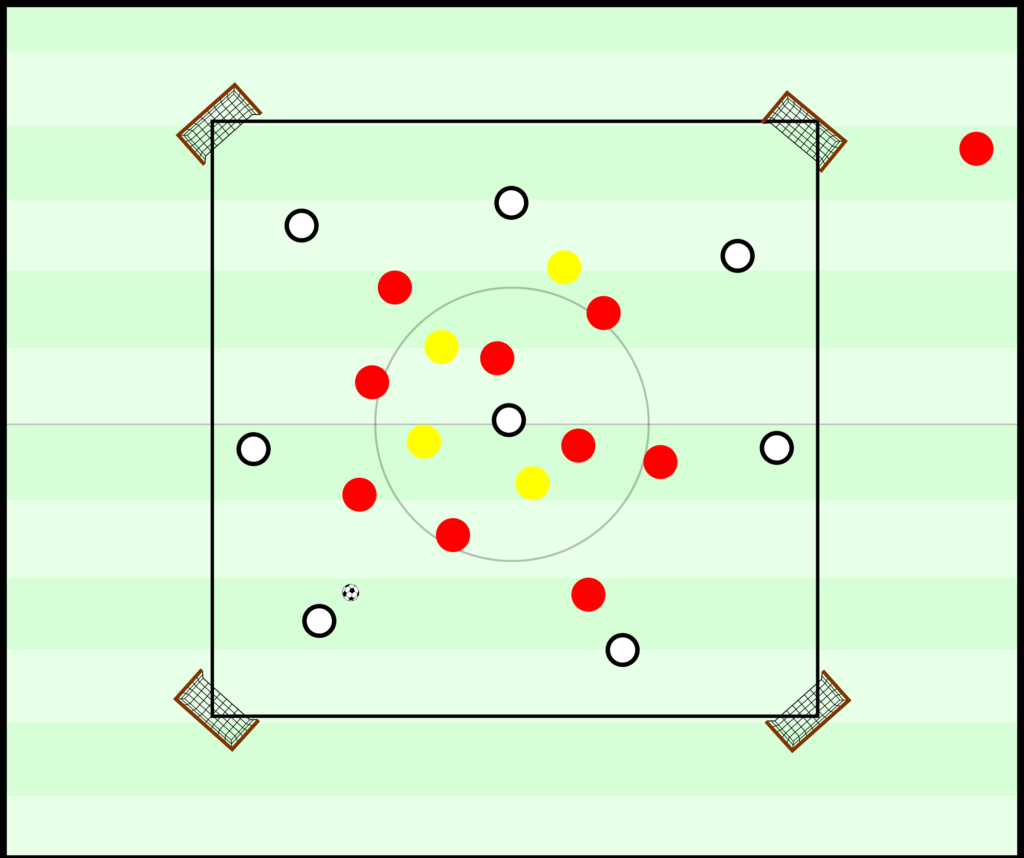 8vs8+4 game on 4 small goals in the corners. The goals could be attacked after playing 10 passes or immediately after winning the ball. 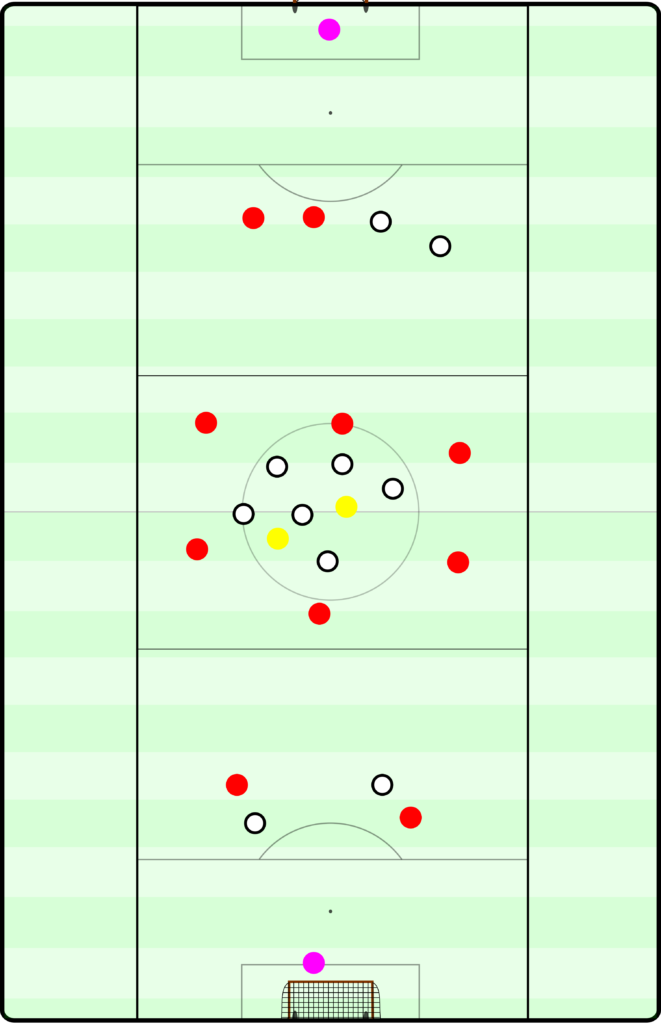 6vs6 rondo in the middle zone with two jokers. After ten passes the possession team could play to their attackers in one of the two attacking thirds. It didn’t matter into which third they played, they could attack both goals. When the two strikers received the ball, 2 players from the middle zone had to support them to create a 4vs2. 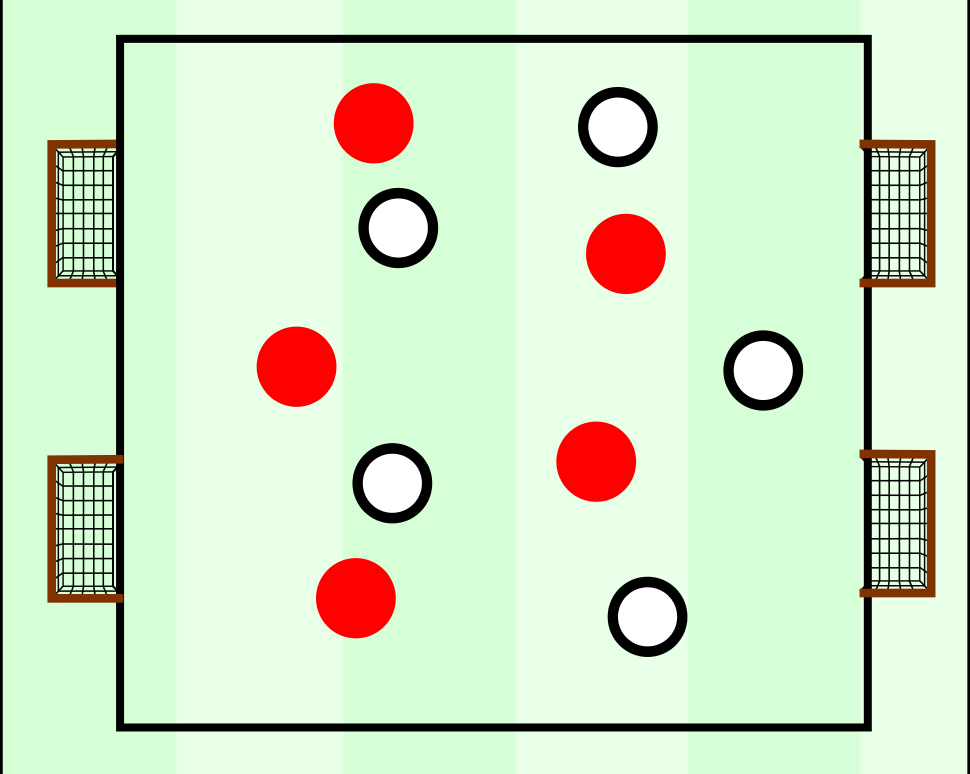 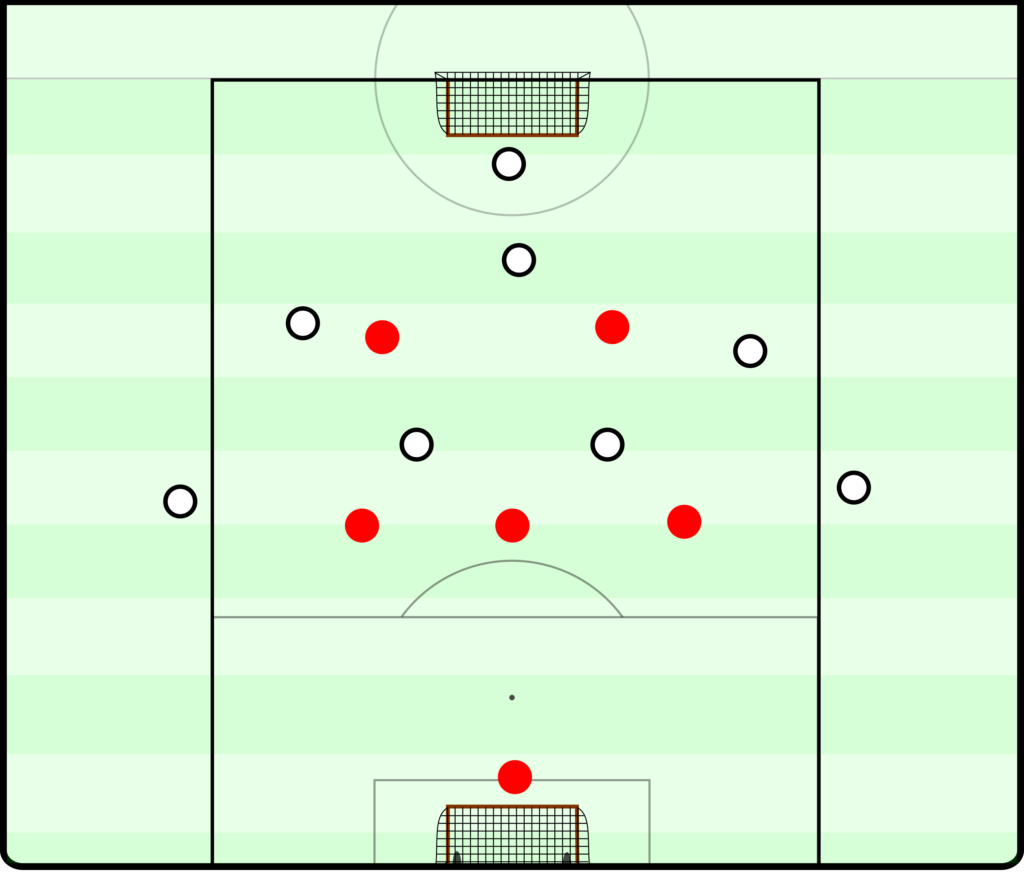 7 attackers played against 5 defenders. 5 attackers were inside with a 3-2 structure, two attackers out wide. The offside-rule was only used for the defending team (red). 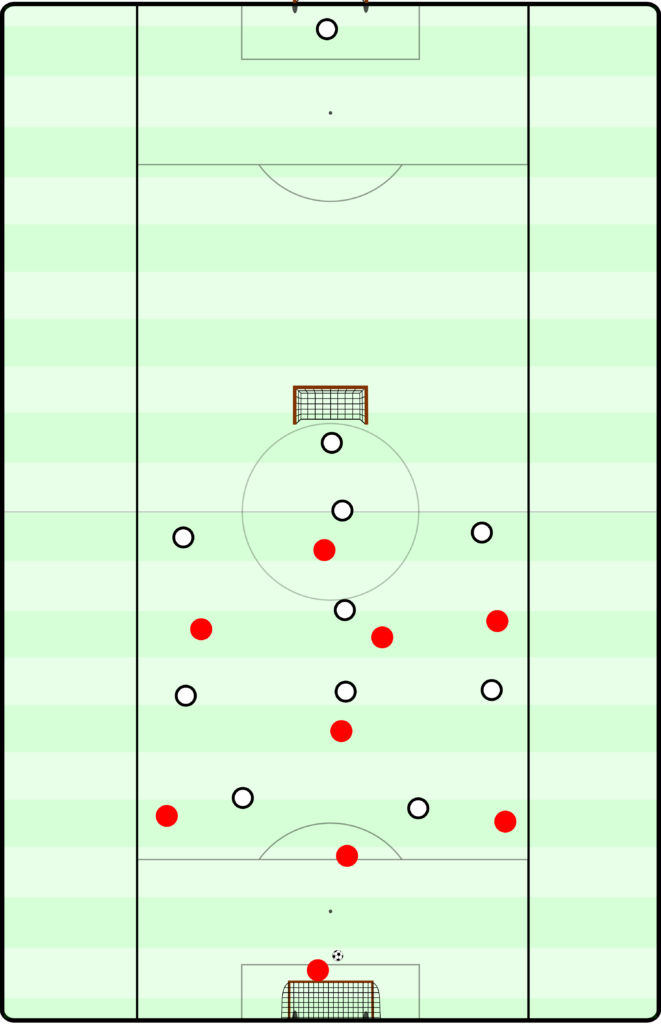 The whole field except the wings was used for a game of 10vs10. I am not sure If I really understand the drill right, but it was explained to me that there were 3 goals and the red team could attack both goals, although they mostly attacked the goal on the ground-line, likely because this has got them more points.

Also the 8vs3 rondo was previously used by Nagelsmann.

Another game form was a 9vs9 on the whole wing. Again, not sure if I understood it right, so didn’t inkscape it. I understood it like that: 3 zones. 3vs1-5vs5-1vs3. So an equal 5vs5 in the middle, aim was to play into the feet of the striker who had to receive support from midfield to play 4 passes, then they were allowed to score.